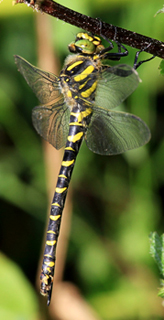 Primeval hunters are patrolling the hot and humid landscape, while chirping grasshoppers and other potential prey keep a low profile in the undergrowth. It’s only a matter of time before some of them fall victim to the keen-eyed Dragonflies, whose agile flight and stunning, colourful displays make spectacular viewing.

Dragonflies, along with their smaller cousins the damselflies, belong to the order called the Odonata or Odonates, which evolved approximately 250 million years ago. They preceded the arrival of the dinosaurs and outlived their subsequent extinction. So they are an ancient and evolutionarily robust group of animals.

Dragonflies are classified in the sub-order Anisoptera, and are generally much larger than damselflies, which comprise the other sub-order Zygoptera. The two groups are also distinguishable by their resting wing position. In dragonflies the wings remain horizontal at rest, while in damselflies the wings are rested upright. The finely-veined, usually clear wings are strengthened by a primitive network of veins. 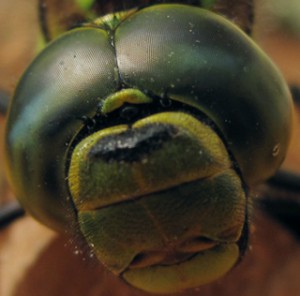 Flight movement is controlled by a simple up-down pivot mechanism in the thorax; in other insects this mechanism has evolved to a much greater complexity. But dragonflies possess other features that are superior to those of other insects.

Despite their primeval origins, dragonflies are adept and agile hunters, with highly sensitive, 360 degree eyesight. Most insects have compound eyes, made up of a few thousand tiny facets, or ommatidia, giving panoramic vision. Dragonfly eyes consist of up to 30,000 ommatidia, each creating a separate image; eight pairs of visual neurons send the images to the dragonfly’s brain to be processed into one image.

Like many insects, dragonflies possess superior colour vision, compared with humans and other mammals. As well as the ability to see red, green and blue light, their visual acuity reaches into the ultra-violet range, and can detect the plane of polarization light, which may help them navigate. 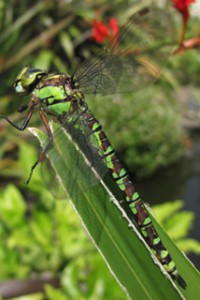 The dragonfly life-cycle begins in water – a pond or slow-moving river or stream – when the adult female lays her eggs on aquatic vegetation. Pronymphs emerge from the eggs, and subsequently undergo many developmental stages before reaching adulthood. In the smaller damselflies this may be just a few months. In the larger Dragonflies the process may take years – more than five in the case of Golden-ringed dragonfly.

At all life stages, these animals are voracious predators, taking other water-borne insects, molluscs, crustacea, tadpoles, small fish and even other dragonfly larvae. Anything is food as long as it is alive and can be tackled successfully. Consequently, different species of dragonfly have evolved different variations of camouflage at the nymph stage, to avoid becoming a meal; this also improves their success at ambushing prey. 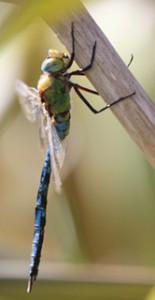 In the UK, adult dragonflies do not have long to mate and display their spectacular colouration; just a couple of weeks at most. Their final emergence from their watery home  is often coordinated with day-length and ambient temperature, giving us a short seasonal window in which to watch and enjoy them.

Among the many species to look out for in the Roseland right now are the Golden ringed (Cordulegaster boltonii), the Southern Hawker (Aeshna cyanea), and the Emperor (Anax imperator) dragonflies, all shown here.

Seen a dragonfly and want to identify and record it?

The British Dragonfly Society want your records! You can learn all about dragonflies and damselflies on their website here, including how to identify them accurately and submit your findings to the society. It’s really easy to enter records of your sightings on their website. Just log in and get started!

People following the progress of the Cirl Bunting Reintroduction Project will be keen to hear that we have now recorded 35 breeding pairs so far this year (last year it was 28 by early September). Pair 35 were discovered, along with an apparently unpaired other male, at a new location near St Mawes. This is an exciting development for us, as it seems to confirm our feelings about the quality of the habitat where they chose to settle. Hopefully the unpaired male is actually hiding another female somewhere, and then we can add another pair to the count. 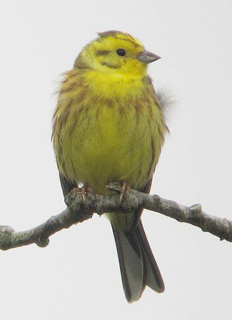 We are celebrating our older birds that continue to have breeding successes. One four year old female has produced at least two successful broods this year, while a four year old male who was single all of last year has had breeding success with his female this year. The average lifespan of a cirl is just two years, so it is great to know these older birds are still out there and doing so well.

One of our other pairs down near St Anthony has been seranaded lately by what seems to be a rather confused yellowhammer. He sings exactly like a male cirl! So much so, that he evokes a territorial response song from a nearby male cirl. The yellowhammer seems to be without a mate of his own, and has become interested in attracting the attention of the nearby female cirl. While it is known that yellowhammers and cirls can pair and produce offspring, known as hybrids, we think that this female has resisted the yellowhammer’s attentions so far. However, the cirl pair seem relatively tolerant of the yellowhammer’s presence.

As well as an unusual number of jellyfish floating gracefully into our inshore waters, Roseland fishing folk are seeing fish species more likely to be found in warmer waters, such as sunfish (Mola mola). Fal River Cornwall have an interesting report here with images.