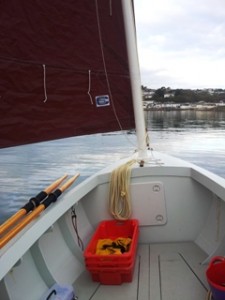 Despite the horrible weather in the days following our sail with the Hungry Sailors, we managed to find a short window of sunshine in which to go out in search of bass in time for our meal with them last month. Given the timeframe and the weather, this window was only one day, but it was better than nothing and we set off from Percuil in beautiful sunshine with a light breeze. 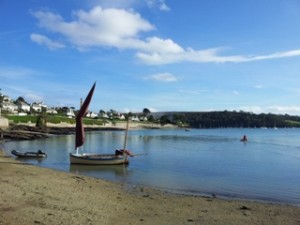 Kensa sails really nicely in very little wind under full sail, which meant we could still make progress out of the river in the morning. We decided to take advantage of the nice still conditions and head out beyond the lighthouse to try out some different spots for fishing. This was the first time we’d sailed Kensa this far, but she went beautifully. We found a nice spot for some decent sized pollack and had a chance to practise manoeuvring Kensa under sail while fishing and working out best speeds and sail arrangements for this. We thought we might be onto the mackerel on our way back into the Carrick Roads towards some likely bass spots but it proved to be no more than a couple so we decided to stop in St Mawes to drop Debs off for work and grab a coffee. 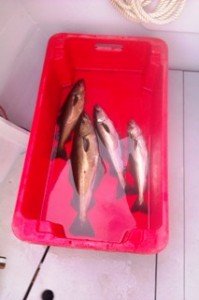 The afternoon brought more pollack and plenty of chance to have a look at likely bass spots but although Simon got a very bass like nibble off Black Rock we didn’t get anything else despite going back over the same ground a few times. By the time the light started to fade and we were forced to admit defeat we were pleased that even if there were no bass in our fish box we did have a respectable catch and certainly our biggest so far!

The plan was to deliver our fish to the Strawbridges on the pilot cutter Morwenna that they’ve been filming the series from, but unfortunately the weather had deteriorated so much by the next day they were forced to cancel. Instead, we drove our pollack down to St Mawes to The Watch House, where the Hungry Sailors had taken over part of the kitchen for the day to film the cooking section of the episode we were featured in. 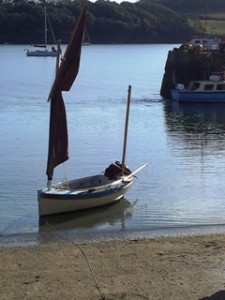 It was great to meet up with other food producers who’d taken part in filming earlier in the week. We had a delicious meal and a lovely afternoon, notwithstanding the somewhat bizarre feeling of having a large camera a foot away pointing straight at you while you eat! I won’t describe it all here- you’ll have to wait until it’s screened – but our pollack, along with all the other local ingredients used, was delicious. Dick Strawbridge pan fried it and served it with a beurre blanc and it really couldn’t have been fresher. 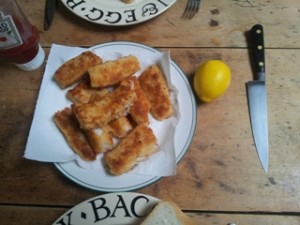 Given the amount of pollack we caught, we also did a bit of cooking ourselves at home that week. My favourite was probably the fish finger sandwiches I made; pollack filleted and cut into fingers, dusted with flour, dipped in beaten egg then breadcrumbs and fried. Yum! 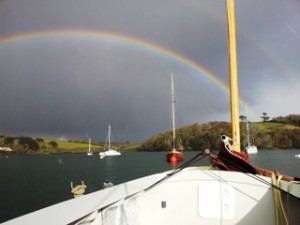 The weather’s been so shocking for most of the rest of this month that we decided to make the most of it by getting Kensa out of the water to do a couple of jobs on her that we felt would be best done on dry land. We decided it would be worth fibreglassing the inside of the water ballast tanks to ensure a really watertight compartment so at the moment she’s drying out in the hope that the sunny weather we’ve been promised this week will give us an opportunity to get that job done and get her back in the water. In the meantime we’ve been buying more fishing kit and as we speak Si is making up snoods for a longline in the shed…sorry, conservatory. Fingers crossed for nicer weather soon!