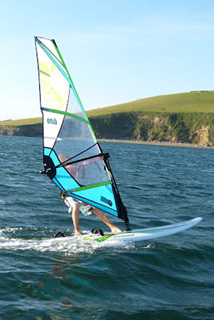 Windsurfing  is almost a bit old school nowadays with kite surfing being the new kid on the block, but in the strong winds of the past few weeks  it has been really exhilarating.  Most of the local sailors are using boards of between 90 and 110 litres of buoyancy which require a minimum of 12-15 knots to get going, any less and they sink. 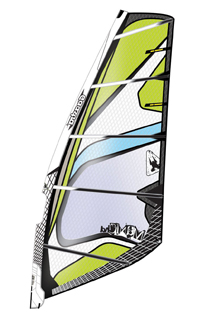 As the wind increases though they are much easier to handle and light to jump steering them by applying foot pressure like a skateboard rather than moving the sail to turn as you do in lighter winds. The strong winds have also meant some of our  small sails getting an airing with 4-4.5m sails being used regularly rather than the usual 5-6m ones we usually sail with.

The water temperature is still reasonable and as long as the air temperature is in double figures then the sailing is still pleasant. The current winter  wetsuits are 5mm thick and offer excellent protection and are also really flexible making them comfortable to wear and many now offer  zipless entry so co cold water coming in through the zip or restrictions on movement caused by stiff waterproof zips.  I find spilt toe boots provide good feel and grip on the board as they grip on your foot better and don’t ‘roll’ round your foot. 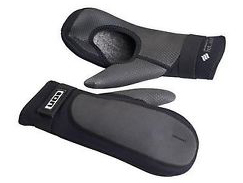 The hands are the real problem to keep warm as it’s not easy to grip with conventional neoprene gloves but some of the manufacturers are now offering palmless mits so you can still grip the boom with your hand but the back of the hand is protected by neoprene. The weather hasn’t been cold enough yet to really need hats but a helmet gives good protection in the strong winds as well as keeping a bit of heat in and most of the sailors are now using them in the high winds.

I had a quick outing on a paddleboard over Christmas on one of the rare light wind days and the Percuil river and St Mawes harbour are now looking really quiet with nearly all the boats off the moorings. The St Mawes sc commodore is still out and about and a few kayakers were also out and about just for the pure enjoyment of being afloat. Outside of the harbour it is also looking a bit quiet with the exception of some more local Olympic hopefuls. 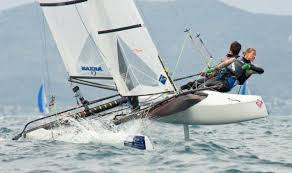 Tom Phipps who is based in Mylor has experienced the ups and downs of Olympic sailing before having been on the Olympic programme previously sailing the Tornado catamaran. When the Tornado was dropped as a class Tom lost his ‘job’ but the Olympic committee have seen fit to put a Catamaran back into the Olympic for 2016 and Tom must be one of the likely candidates to take the British place in the Nacra catamaran. The Nacra is a modern boat, light weight, high aspect rig and curved foils which can lift it out of the water and ‘foil’. Tom has been out training in Carrick roads and Falmouth bay with his partner, Zennor Pascoe and they’re very easy to spot because they’re going so fast! (You can read all about their exploits in our new feature, The Wake to Rio 2016 by clicking here – Ed.)

As the New Year looms and the days start to lengthen again I hope your thoughts will look to the new season and how you can get out and about on the water and enjoy our unique estuary and coast, there are so many ways to enjoy it. See you out there!