Sallie Eden chats to Dr Mark Crees on his life, love for Charles Dickens and his wonderful play ‘The Locksmith’s Wife’ 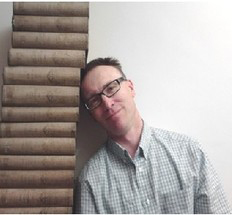 Dr Mark Crees isn’t an actor…or is he? Well, he’s certainly an accomplished playwright and, by the time you read this, many of you will have heard Mark reading from Charles Dickens’ A Christmas Carol at a CHSW fundraiser in St Mawes. I hope you’ll agree that, given the passion he puts into his recitals, his performances are no ordinary reading.

As well as his readings, Mark writes essays and stories, many of which have appeared in The Times Literary Supplement, The Reader and The Threepenny Review[1]. He has also been interviewed on radio about his love for Victorian literature. Mark works hard to bring the books he loves to everyone, whilst also raising money for charities which are important to him. As well as supporting CHSW, he’s involved in Arts for Health, Cornwall’s ‘Reading Allowed’ project, designed to assist people with dementia to continue to enjoy books, by reading aloud to them.

In his “day job”, Mark teaches senior school pupils and leads adult education classes, specialising in, amongst others, DH Lawrence, Wordsworth and Virginia Woolf. But across the Roseland he is probably best known for his talks on Dickens’ work and for his absolutely wonderful play, ‘The Locksmith’s Wife’, performed by Cube Theatre as part of a national tour. Both sad and funny, it’s a tale of disappointment and resentment within a marriage. For me, it’s also a story about story-telling; I think Dickens would have been proud to have written it himself.

As Mark says, “My love of Dickens’ work really took off when I discovered, in a Liverpool junk shop, a 39-volume National Edition of his works. It cost £30. I use this set to read to my family and when I read to an audience. Dickens’ stories were made for the voice and need to be heard to be believed. Tears and laughter, darkness and light, are closely bound together in his books. As well as writing very good stories, his books gave people hope and still do.

“I also chair the Mark Rutherford[2] Society, and present readings from his work. Like Dickens, Rutherford’s books tell of the conflicting ideas of the period, as well the lives of ordinary people.”

I wondered where his love of reading came from. “At school I was fortunate to have a wonderful English teacher, Liz Allen, with whom I remain friends – she planted a seed which has grown and grown and which I like to think I am spreading. As a teacher myself now, I aim to inspire my students by reading aloud to them – making lessons into a performance. I really believe that everyone from small children and teenagers onwards gets more out of books when they are read with feeling.

“As well as having a real love of books, my parents and grandparents were all linked to drama in some way – from a shared passion for reading aloud, to my grandparents running a theatrical boarding house. In fact, my parents wanted me to be an actor, but I wanted to be a drummer, something which I still love doing.”

Why Dickens? “I always loved Dickens. My father used to read it to me. But it didn’t work when I read the books to myself, however, in my twenties I read aloud Bleak House and that was it! I was hooked. Dickens was a very emotional writer, he worried about people. Many people think he wrote only about class differences and poverty but he wrote about everyone and he tried to understand their problems. 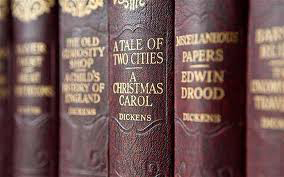 “I rather think there are similarities between us; for example, we’re both worriers. And reading him helps to clarify my own thoughts. He was interested in people who are trapped, but he always tried to find a way out for them. He had great insight, which is emotionally powerful. For me, Dickens is a sustaining influence, almost another member of the family.”

What of people who say they don’t like Dickens?  “In my presentations on discovering Dickens, I mention car boot sales, tropical butterflies, public libraries, elderly parents, misers and hairdressers.” Something for everyone…and, yes, there is a link! “Dickens wrote about life. He described life in prison; his stories were full of emotion, and they reflected everyday living across the classes.”

So, how did Mark end up in Cornwall and why teaching? “At school I wasn’t particularly good at literature and my first degree was in Sociology. I worked in a children’s home. At that time I was reading more and more. During that period I was part of a Socialist Theatrical company and wrote lots of plays on a range of topical issues – the Docks’ strikes, the demise of the NHS and so on. I was also heavily involved in the wider theatrical scene in Liverpool. In hindsight it was great training.

“I did a part time MA in Victorian literature at Liverpool University. I felt I had found my calling and went on to do a PhD. I was fortunate to have as an inspiration, Dr Phil Davis who values the links between literature, emotion and personal thinking. I believe that, in times of crisis or worry, reading and understanding characters from books can help people express their own feelings and concerns in a more anonymous way; they can use stories as a sounding board.

“But it was when my wife and I went on a cycling holiday to Zennor and fell in love with Cornwall that our lives took a different turn. We were determined to move here so we did. I was fortunate to obtain a job in Truro and we’ve been here for 13 years now. I realise that all of the work I did, and my studies, were leading to the love I now have for literature.

“I am keen to follow Dickens’ tradition of reading aloud, reading to my wife and to my children. With them, I started with Oliver Twist, which most children like. There’s no need to read a whole book. Whether reading for pleasure or teaching it’s all about  choosing the right book, even the right version, so that even though they may not be interested in books at the time, when children leave school there’s something, that seed tucked away, ready for the future.

“Although I’d probably say that reading is at the core of my life, I’d have to say that, apart from my family, the real highlight has been writing and watching my play, ‘The Locksmith’s Wife’. “I’d like to have been in it. Thinking that led directly to one of the characters in the play.

“I’m particularly keen for people to rediscover the lost art of reading-aloud and for parents to read to their children. I don’t just mean reading a book as it’s written, but loosening up and performing the stories. You don’t have to be an actor to do that, just someone with a passion for reading as an art.”

Thinking about New Year’s Resolutions? Why not make a start by reading aloud one of Dickens’ short stories or even, belatedly, one of his other Christmas tales? After all, hearing Sam Weller read aloud, “with such remarks as suggested themselves to his mind”, never failed to afford Mr Pickwick great amusement.[3]