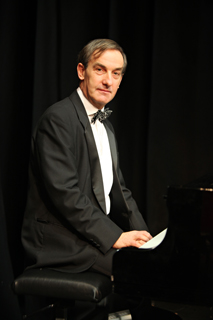 Is it a bird? Is it a plane? No, it’s Terry Saunders, singer, writer, source of anecdotes, cabaret artist, Mastermind contestant….

Not quite knowing where to begin, I asked Terry to tell me about himself.

“Oh dear – the first question and I’m struggling…. perhaps I can quote from a recent concert programme, which said ‘Terry Saunders has had an eclectic musical career as a singer of opera, oratorio, lieder and music theatre, an accompanist to other singers, instrumentalists and himself, a conductor of oratorio, operetta and musicals, an organist and choirmaster, a cabaret entertainer, a music school repetiteur, a comic actor and a pantomime dame.’  However, when I am asked, I generally abbreviate – and alliterate – it to ‘church, classical concerts and cabaret’.

“I’ve been ‘into music’ ever since starting piano lessons at seven and buying my first classical record at nine (it was 12/6 in old money). I concentrated on singing during my twenties and thirties, but then joined a six-man cabaret group – Vamp ‘til Ready as their accompanist. I was given the opportunity to sing from the piano and that inspired me to build up my repertoire as a solo cabaret entertainer.”

“I sometimes describe my ideal audience as middle-class, middle-brow and middle-aged – certainly, I have foundthat my one-man tribute shows to Noel Coward and Cole Porter have gone down well with cruise audiences and Conservative associations!  However, in recent years, I have given several hundred concerts (as half of a duo) to predominantly elderly people via two splendid organisations – Music in hospitals and Lost Chord, a charity dedicated to improving the quality of life and well-being of those suffering with dementia, using interactive musical stimuli to increase their general awareness and self-esteem.”

Do you write your own material? Where do you get your inspiration? 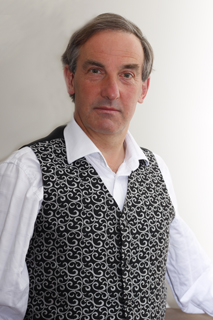 “I’ve written a number of songs to perform, which at least guarantees that the audience won’t have heard them before!  They include some music hall songs for the 21st century, a Tom Lehrer-style tribute to the London Underground and several songs for specific occasions like birthdays and retirement parties.”

“I enjoy the kinds of music which I’ve been lucky enough to perform. Under the ‘church’ heading, that includes both the great baroque composers such as Bach and Handel and the wonderful English hymnody from Orlando Gibbons to Herbert Howells. On the lighter side, I have a particular fondness for the music (and wit) of Noel Coward, Cole Porter and Stephen Sondheim.”

Have you always wanted to be an entertainer?

“My mother says she first foresaw my future career when, aged seven, I played Father Christmas at primary school.  As part of the action, I was meant to take my boots off before leaving presents under the Christmas tree. My wellingtons proved rather tricky to remove, so I simply sat down and ad-libbed to the audience before being dragged off by an impatient member of staff!” [Note to readers: he hasn’t changed much!]

Do you have any advice/insights for people who want to become performers?

“A self-employed musician needs either regular sources of income (e.g. session work, conducting choirs etc.) or an indefatigable spirit. In any event, the more people you know ‘in the business’, the more opportunities come up, so it is helpful to get involved in events which give you the chance to extend your circle of musical acquaintances.”

“In early May I’m doing a twelve-day tour of Jersey, as half of a duo with a soprano. At the end of the month, I’m the musical director of a new production based on the lives and operas of Gilbert and Sullivan, called Trial By Music. Set in a court-room in Utopia, where Gilbert (who was notoriously litigious) is suing Sullivan for not giving him sufficient credit for his role in their partnership, it’s a great excuse to include some of their best numbers as ‘evidence’ for one side or the other!”

“I have family in the South West so, before I go I must mention how much I enjoyed performing at the Minack Theatre in 2003 (as Francis Fryer in ‘Calamity Jane’), a place I’d love to visit again.”

Check out some of Terry’s performances on the website, they made me laugh