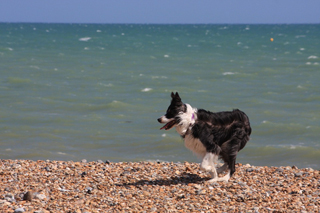 A lost collie was found by two local dog-walkers on the footpath at Bohortha. Refusing to leave them so the couple called a vet in Truro who said it might be best to leave it as it might be a stray farm dog.

Deciding that didn’t feel right, one of the couple, Sarah, took it to the local vets in Ruan High Lanes and they managed to find a phone number in the chip of the collar-less dog. When they phoned the number, however, the owner broke down in tears.

Dog walker, Richard, said, “We realised that the bedraggled Collie was far too intelligent to have lost her owner by accident. The other person I met on the coastpath, Sarah, was insistent ‘l simply cannot leave her here’ she kept saying ‘l must help her find her owner’ so she took her to the National Trust station at Towan beach. They called the local vet where she was taken and there, they fund the dog had a chip with a phone number.”

Astonishingly it turned out the owner was a fisherman from Penryn. He had been out all day with the dog on a fishing trip… two miles out! On a choppy day, the collie had fallen overboard and had swum all the way back to those shores through the waves and wind!

Needless to say the fisherman was hugely emotional at the reunion and was very grateful to Richard and especially, Sarah, who had been so insistent in finding him.