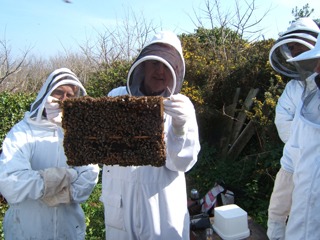 Last weekend I spent a most enjoyable time on the Isles of Scilly – and the weather made it feel like summer-time (I know it was the same here, as well, but hey!, it could have rained all the time I was there!). The reason I went over was following an invitation to talk to the islands’ beekeepers about “Queen Rearing”, a subject that troubles them considerably, mainly because of the limited number of beekeepers and colonies there and the concerns about the bees in-breeding.

There are 11 beekeepers across 4 of the islands, with only a total of about 18 colonies between them, so their concern was justifiable, but after spending the first part of the Saturday with them in “class-room” mode, it started to become apparent that the problem might not be queen-rearing but rather a lack of detailed understanding of the build-up to the mating process. This can then result in swarming, with the consequent weakening of the hive and the lack of any sizeable honey crop. The more we talked, the more the likely true reasons for the problems these guys were having became apparent. 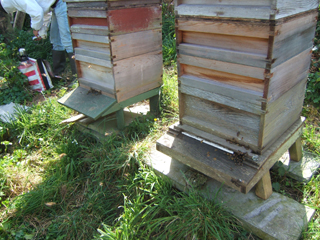 They had no access to education (which we on the mainland take for granted), no visiting lecturers, and a mixed knowledge-base ranging from 40 years for one of the beekeepers to a matter of months for the most recent recruit. This has led to ineffective beekeeping for most, who then lose their bees in a swarm without realising it and assume the resultant dwindled colony is down to genetic problems of in-breeding. At the end of the day, they might be right, but I was wearing my detective’s deer-stalker by now, so we shall see!

Anyway, after an interesting morning, off we went to have a look at 2 of the colonies on St Mary’s. I have to say, I was stunned! The docility of the bees had to be seen to be believed, even by a seasoned beekeeper. I used no smoke to pacify either colony – more as a test of what I was going to find than for any other reason. Whatever manipulations I undertook, whether it was pulling out combs from the hive to examine them more closely, or shaking the bees off their combs for an even closer look, the bees took no notice whatsoever, either staying on the comb in a calm, untroubled manner, just getting on with the business of tending their young brood, or departing the hive on further foraging trips and bringing back nectar and pollen by the bucketful! Mind you, there was no evidence of propolis in the hives, so there was no cracking of the crown-board or when separating the frames – SO much easier than at home! 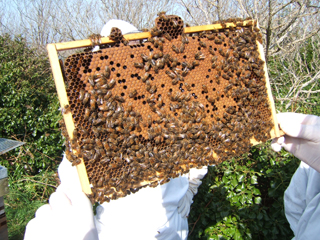 The brood (unhatched bees) occupied most of the combs in the hive (prime candidate for swarming preparations in the next 2 or 3 weeks!), neatly surrounded by the arcs of pollen above and the triangles of honey or nectar to either side of the pollen. There was drone brood present (not an excessive amount, but enough to show that they knew swarming time was approaching), but the most interesting thing was the colour of the bees. The first colony had a predominance of darker bees, the rest showing an Italian component in their blood-line. Where the former darkness came from, we are not sure, but suffice it to say that not so many years ago some morphometric analysis was performed on a sample of bees from the islands which showed a distinct skew towards the “British Black Bee” (Apis mellifera mellifera or Amm), as the ancestor. This was exciting news, as it could signify the continued presence of such a sub-species on the isles! 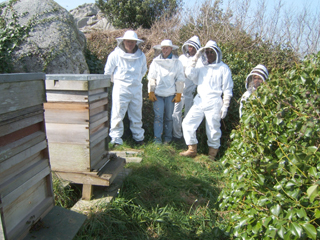 Then we saw the (unmarked !) queen – which I promptly captured and marked with a bold, white dot on her thorax – but she was beautiful! Full-bodied, very dark in colouring, and as calm as could be. Wonderful breeding material for what I was intending to propose later in the week-end. We then moved on to examine the second colony, which was again very calm just like the first. This was a slightly larger colony, spreading its brood over two boxes, and when I pulled out the first comb to scrape some wild comb off the end-wall of the hive, there was the (again unmarked) queen! She was also given the white dot treatment, so both queens will be much easier to spot in future manipulations.

The number of bees showing native tendency (the darker colouring referred to earlier) was lower in this colony than in the first, but it was still apparent. This native trait was exemplified additionally by the docility of the bees throughout. We looked at all the combs and there was no sign of disease, so again a good colony from which to breed. We then drew the day to a close and decided we should go to St Martin’s on the following day to compare the bees and look for differences or similarities. So Sunday morning dawning warm and bright once more, three of us departed on board “Voyager” to St Martin’s, a quiet island with just 1 road going from one end of the island to the other.

A short walk brought us to our destination, at which we had coffee and were joined by one of the 2 beekeepers on Tresco, the 2 other St Martin’s beekeepers – and the wife and teen-age children of the host beekeeper (a good sign for the future of beekeeping on the islands). After a re-cap on “Queen rearing”, we kitted up to examine the 1 hive available to us that day. Again, no smoke was used, the bees were calm and placid. There was no sign of defensiveness or stinging intent and I worked my way through all the combs looking for disease, stores – and the queen. This time she was marked, a light blue colour (which could have meant she was a 2010 queen, though she was only installed last year from another island’s colony). 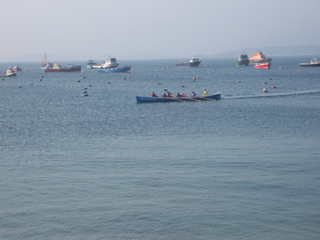 Once again, the bees showed the “native” colouring, the majority being quite dark (maybe Carniolan or Caucasian originally, who knows?), but I really would like to have some of these bees in my apiary – though I know they would likely not survive because of Varroa (there is no Varroa on any of the islands and the beekeepers maintain a very strict regime to prevent its being brought in by visitors). The colony was wall-to-wall brood, as on St Mary’s, very likely intending to swarm in the next 2 to 3 weeks, so instructions were given as to how best handle that, then back we went for the ferry home.

At the airport awaiting my flight home, one of the beekeepers from St Mary’s, whose hive we hadn’t been able to visit, came over and thanked me for the invigorating week-end. He told me that after leaving us on Saturday he had gone to look at his bees and found them even darker than those we had examined – this could necessitate another visit, I think! In the meantime, a wonderful and fascinating experience giving a real fillip to everybody’s beekeeping intent (mine included!). Genetic problems from in-breeding? I don’t think so, but the results of actions during this coming season will give a clearer indication.

In the meantime, like the beekeepers on the Isles of Scilly, keep an eye open for swarms, as the swarming season is just starting (down in Hayle, it’s already started – there was a swarm down there at the beginning of March!). Bees are still endangered and every swarm is important to the planet’s ecological balance. If swarms are not caught they will enter chimneys, roof spaces (attics), sheds, garages – in fact anywhere that is dry and with enough space to build a nest of combs. Better that they are caught by a beekeeper who can hive them and treat them for Varroa so that they do not die. Please contact me if you see one and I will arrange for its retrieval – this is normally free, unless the bees have entered a void and have started building a nest, which makes things a lot more protracted and complicated. Good swarm-spotting!