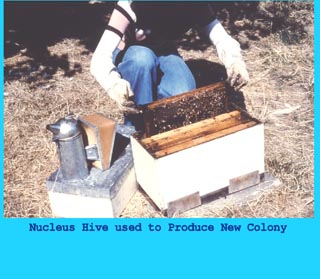 Well, I should have known Nature would not be so stupid as to allow rain and cold weather to continue for so long that the bees would die of starvation through lack of nectar and flying days! Indeed, She has proved yet again that She knows best, even if we do not understand Her reasoning. The past two weeks have seen a dramatic change in the weather conditions, such that, at last, the bees can leave the hive to forage and return loaded with nectar and pollen in abundance. Whilst this is obviously good news for the bees, it still does not do much for our own honey crop, as the bees are just making up depleted stores in their brood box to see them through the next difficult period.

Very little honey is coming upstairs into the honey supers (which are the boxes of honey surplus to the bees’ requirements) for me to take away. Additionally, now we have passed the summer solstice and days are getting shorter, the queen is reducing the size of her brood nest, which means there is even more room in the brood box to store honey for winter consumption – a double whammy for the beekeeper! However, we mustn’t complain. The bees are doing what they do best and even if we get no honey for ourselves, the bees at least are alive and thriving. 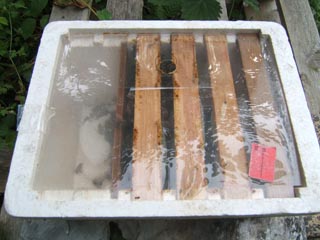 My splits (which I made earlier from strong colonies that might otherwise have swarmed) all now have mated queens and are building up into strong colonies ready to go into the winter. And do you remember the Jenter kit I referred to last month? The cell frame (which I also showed you last month, with the queen cells being looked after by the bees) was finally taken out of the cell “finisher” colony and the cells distributed before the queens hatched. Unfortunately, of the 16 larvae originally transferred to the cell frame, only 8 were drawn down into queen cells (no, I don’t know why, either!).

However, that turned out to be to my advantage, because I was able to utilise 6 queen cells in 2 Apidea mini-nucs and 4 Kirchain mini-nucs (which is all that I had anyway), using only a cupful of bees in each. This is far less wasteful of bees than using full-blown nucs, which require between one fifth and one third of a colony to establish. The last 2 queen cells were left in the “finisher” colony, but with a queen cage around each, to protect them from the bees (who would attack a strange queen in their colony if she were allowed to wander free and unprotected). The queen cells transferred to the min-nucs duly matured and the virgin queens emerged satisfactorily. 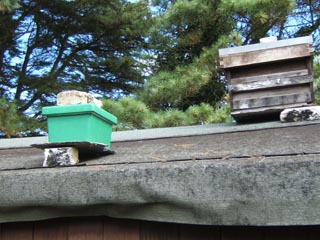 Since that time, we have had the occasional good day weather-wise, such that the 6 virgins were able to leave their hives to mate and have now started to lay and are building up their mini-nuc colonies quite nicely. Additionally, next time I opened the “finisher” hive with the queen cells in their queen cages, both queens had emerged, but one queen was dead (don’t ask me!) and the other was fine. I therefore introduced the survivor into a colony which had developed a drone-laying queen (which would have been doomed if no new queen were introduced) and was left to ponder as to why the other queen had died. The next step is to transfer the mini-nucs into standard sized nucs using British Standard frames. From that point they can grow on into full-blown colonies ready for next year, but with the advantage of having those desirable characteristics that I have referred to previously and for which I am willing to go to such extreme lengths! 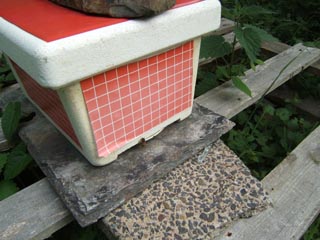 As for swarming, since colony sizes have reduced recently owing to the bad weather preventing foraging from taking place and so reducing the amount of food available to feed the brood, I suspect we might see a lot of late swarms this year. However, if the Jet Stream returns to its southerly position and brings back the cold and the wet, then the bees will probably just sit tight and hope that their beloved beekeeper will keep an eye on their food levels! So if the weather is hot and dry over a period of days, keep an eye out for the odd late swarm and get in touch. I will find someone to retrieve it so that we all do our bit in saving the species from extinction.