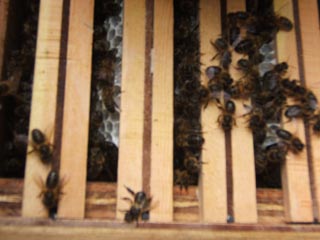 This past month has been hectic from a beekeeping point of view. There was the initial flurry at the start of the month when I did a split on a colony and then needed to set up nuclei to utilise the queen cells that were produced (I never like to see queen cells wasted!). Then there was the distributing of those nuclei to ensure that I obtained a varied mating of the virgin queens to avoid the risk of in-breeding. This meant journeys to my out-apiaries with the prepared nuclei and, in some cases, the return to my home apiary of nuclei produced at the out-apiary by taking queen-right nuclei from particularly populous colonies. 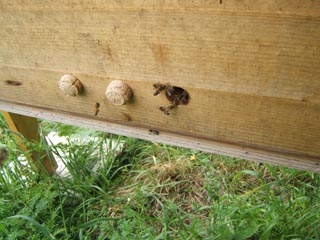 This gives a check to the growth of the colony, as the hatching bees from the brood area are not replaced with newly laid eggs, since there is no laying queen left in the hive. This provides a check on colony growth as well as a check on swarming and is a useful method of swarm control that I use quite often, especially with bees on oil-seed rape, when bees tend to want to swarm more readily. Some of those nuclei have successfully accepted their virgin queens and some of the latter have successfully mated, but others have not been so fortunate and the queen has been lost – presumably on her way back to the hive after a mating flight. She either got lost, became cold, or was eaten by a passing bird (why do I still encourage my swallows to nest in my garage?!). 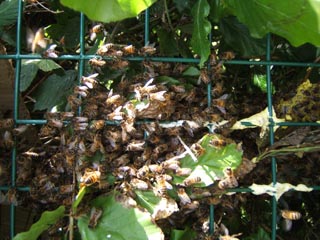 This period of nuclei development did not involve me in much work, other than ensuring there was enough food for the developing colonies. However, that freneticism has been replace during the past 10days or so with a barrage of phone calls regarding solitary bees, bumble bees – and swarms! I have collected swarms from as far afield as St Agnes (from a friend of mine who knows of my interest in bees and genetics), Carnon Downs, Truro and Tregony. If the queens from these swarms are not to my liking, I will replace them with my black queens to boost the number of Cornish black bees in my apiary, otherwise I will keep them for a season to see how they perform.

They might prove useful in varying the mix of drones in the locality for mating with my black virgins. Swarms are very fickle, or rather, the bees in them can be. One was on the outside face of a hedge, a second on a fence post, another on the face of a wall at first floor level, whilst another was a classic “bunch of grapes” hanging in a tree at about 10 feet high. This has meant that I have been able to stock my Warré hive, my Top Bar Hive (TBH), and also set up two separate nuclei. 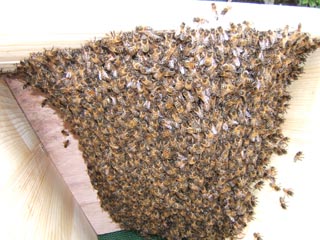 The Warré hive has needed a little more attention than the others as the swarm I used was a small caste with a virgin queen, so I decided to give them some sugar syrup whilst they were in need. This has enabled them to start building three beautiful, white combs of wax and they are now virtually self-sufficient in terms of nectar coming into the hive, so once they have eaten the sugar syrup they currently have I will remove the feeder. The TBH has not needed any help at all as they are a prime swarm with a mated queen and are working like Trojans to bring in enough nectar to generate the wax. They were hived on 10 top bars but I have reduced this to 6 , which is what they chose to start building on.

I shall increase the number available as the colony draws comb or as it grows in size, whichever comes first. The next swarm was at Treliske, a small caste, yet they had been in the hedge long enough to build a palm-size piece of comb – and there were eggs in it! This suggests to me a caste, with a virgin queen, who then mated whilst hanging in the swarm – most unusual. I included the small piece of comb in the nucleus when I hived them, as the pheromones associated with brood tend to “hold” colonies in their hives and deter them from absconding. The most recent swarm I’ve hived seems to be queen-less – and this is where my mini-nucs come in. If the swarm is indeed queen-less, I will unite it with one of my mini-nucs and produce a colony headed by another of my Cornish black queens. Very useful! 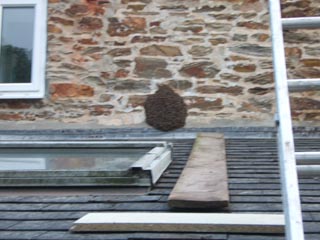 So, with weather such as we have had over the past couple of weeks it seems the swarming season is upon us! Keep your eyes skinned for more and contact me if you see one. I will either collect it and unite it with one of my smaller colonies or contact another beekeeper to collect it. Either way, it is important that the swarm is collected and treated for Varroa, so that it has a chance of surviving the winter ahead (have you noticed the shorter days already? No, nor have I, but I can’t believe we’ve passed the longest day already). I wonder what this month will bring?