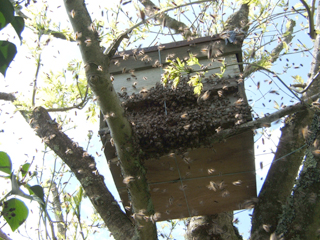 What a couple of months it’s been!  Swarms left, right and centre!  I think it’s fair to say that 2014 will go down as one of the swarmiest seasons for a year or two, mainly as the result of a long, mild winter.  The queen didn’t really stop laying, so once the warmer weather arrived many colonies were at bursting point, with thousands and thousands of bees with insufficient space for their babies or their food.

If we ran out of space in our homes, then we’d think about moving to a bigger property too, if we could afford it.   The bees don’t have the same financial restraints – they leave their hive and then look for a new home, after they’ve left the old one – hence the number of swarms found hanging in trees, taking up residence in flat rooves, finding holes in partition walls  which give them access to a warm, dry space – I even collected one swarm which had taken a fancy to a Wendy House, much to the chagrin of the little girls whose Wendy House it was! 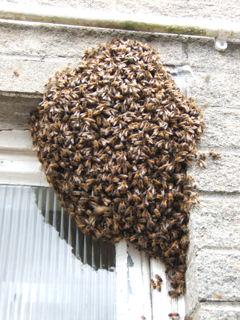 So, yes, it’s been a very busy time, not least because I’m also, now, the Swarm Coordinator for the whole of Cornwall, which means that, though I don’t have to actually collect the swarms myself (unless they’re really local), I am expected to be the person who knows who will be willing to, and this has meant spending a lot of time on the phone trying to find a willing body to respond at a moment’s notice.

Swarming is a way of propagating the species, so we don’t want the bees to stop swarming.  It even used to be a “holy grail” of beekeeping that we bred bees which did not want to swarm – but if we’d been successful then the bee population would be at greater risk of extinction than it already is.  No, I find swarming very useful.  It allows me to bring new blood into my apiaries to maintain genetic variation (up to a point) – for example, I recently collected one swarm which is of Caucasian or Carniolan origin (the queen is a distinctly grey colour) and I shall be using that to provide my drones for the next season.

I’ve also picked up more Italian bees (distinctly yellow/amber abdomen), so whilst I have just re-queened my existing colonies of Italian bees with Cornish black queens, I will have to raise some more Cornish blacks to replace these recent incomers.  The reason for this is that the Italians are used to long, hot summers and short, mild winters, so the short summers and longer winters of damp, misty weather we experience in Cornwall hardly suit their needs. 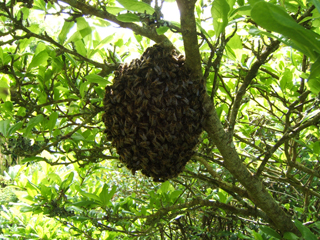 Also, the Cornish blacks are more abstemious than, say, Italians, and in periods of dearth will hold back on wasting energy and burning up calories, which need replenishing via honey stores, whilst the Italians say “Whey-hey!  Let’s party!” and eat up their stores in next to no time – and then we wonder why they starve to death!  No, definitely not a race to my liking (the bees, that is).

The first swarm I had was one from my home apiary (sshhh!  Don’t tell anyone!  I’m not supposed to have swarms from my colonies!).  I caught it in a bait hive set up in a tree in the apiary.  That night I took down the bait hive and placed it on its future site ready for transfer to a proper hive next morning. However, when I looked into the hive next day, the bees had gone! 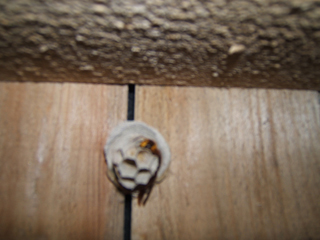 How ungrateful – but, on looking around, there they were, clustered in a tree about 5 metres from where the bait hive had been earlier.  I collected them and immediately put them into my Warré hive, then, once they were all in, placed a queen excluder under the bottom box so that the queen could not get out and abscond again.  Once the bees had drawn some comb and the queen had started laying again, I removed the queen excluder and the bees have flourished ever since (which reminds me, I need to provide another box for them so they don’t run out of space).

At the time I was collecting this swarm from the second tree, I heard the unmistakeable sound of another swarm and, on turning round, saw this cloud of bees flying – at ground level! – towards a clump of long grass in the apiary, where they settled.  I immediately placed a box over them so they thought they had found a new home and, once they were in, moved it into a hew hive.   But why fly at ground level – bees normally fly at about 12′ – and they very rarely settle on the ground – it’s not their natural nesting preference (think of tall, hollow tree trunks with a knot hole about 20′ off the ground).  Anyway, all done! 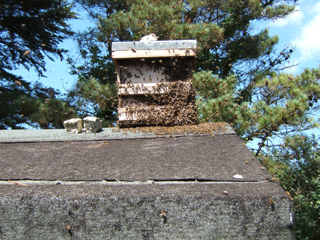 I’ve had some funnies, too.  Two colonies, both very strong, bringing in plenty of honey, laying plenty of brood – suddenly the queen disappears!  Then, two nuclei ie small colonies with few bees, with open queen cells and no queen!  To be fair, I think this was down to the heat, as these nuclei were in full sun – I have established a new “nursery” for nuclei since then under the partial shade of a tree (though the books say, never place hives under trees because of the rain falling off the leaves and disturbing the bees!  We’ll see.

Finally, queen rearing – I’ve tried twice to raise queen cells and neither attempt was successful, though I followed the same procedure I normally do.  I put this down to a heavy nectar flow and the bees not being interested in raising queens with so many other things to do.  So swarms have been quite useful this year. 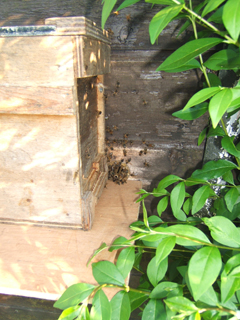 Not all calls I receive are about swarms – I had one recently regarding a “gigantic” bee making a nest in a horse shelter.  With the threat of the Asian Hornet imminently arriving in the UK from France, I went to have a look and found an indigenous, European queen hornet building its nest on the ceiling of the shelter.  Yes, it was massive and certainly frightening to see, but thankfully was not the more feared Asian Hornet, which is an avid bee predator, so we can breathe easy for a bit longer.

And it’s not over yet.  I expect to be called out to more swarms before the end of the season and to receive many more calls from around the county for passing on.  If you see a swarm, do please get in touch and I will either deal with it myself or pass it on to James or some other local beekeeper nearby to deal with.  It is important that every free hanging swarm is captured before it makes its home in a loft space or chimney stack, from which it is a lot more difficult to remove (unless, as in two cases recently, a swarm has just gone into a chimney stack and the owner has been able to light a fire and smoke the bees back out before they started building comb).  Apart from which, if we don’t treat the swarm for Varroa, it will die out within a year or so of finding a nesting site.

Looking forward to hearing from you!