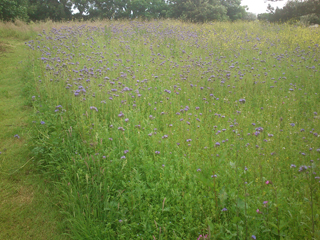 What a contrast in the weather compared to a month ago! The bees don’t know whether they’re coming or going! But at least they’re not going like they were last month – the swarming urge is waning and though there are the odd one or two around, it is nothing like last month when there were swarms on a virtually daily basis around the county.

The forecasters say that this summer is going to be a repeat of the one we had in 1976 – but not much chance of that based on the past couple of weeks or so. As usual, I am thinking “Oh my golly. We’ve only got July left and what if it isn’t nectar friendly weather? No honey harvest!”. So far, when I’ve thought that, Nature has come through and the bees were able to bring in a sizeable harvest, so I just need a little patience. – and some more good weather! 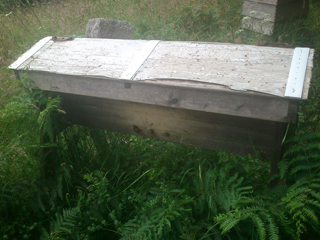 In the meantime, whilst at the Royal Cornwall Show, I was talking with some other beekeepers about hives and swarms (as you do), when I mentioned my newly acquired polystyrene Langstroth Jumbo hive that I am trying as an experiment (still flourishing, by the way). A fellow member of the Roseland Beekeeping Group said to me “Oh, I’ve got a Langstroth nucleus box I can’t use, because all my kit is of National dimensions – would you like it?”.

Silly question! In the event, he found not only the “Langstroth” nuc box and frames but also two brood boxes that he gave me – but when I collected them, I realised they were slightly smaller and were what are known as Commercial hives (because of their popularity amongst commercial beekeepers, being of a larger dimension – the hives, that is, not the beekeepers!). 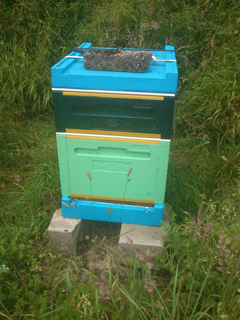 That suits me fine, and thank you very much, because the Langstroth hive is a single walled hive and too large to fit inside WBC (double walled) carcases (though I don’t need to do that with my poly version), whereas the Commercial hive has a footprint that does. I can therefore use this larger hive body inside my WBC carcases and get the two-fold benefit of a larger brood box and extra protection against the weather. I think it is a given nowadays that bees are becoming more prolific and the queens are producing larger colonies, to the extent that the traditional sized hives (dating back to just after WWII in terms of their specifications) are no longer adequate to support today’s bees in today’s climate.

Hence the general trend of increased amounts of swarming over the past few years, something I’ve noticed markedly in terms of my own beekeeping as well as generally across the county. So there we go – yet another hive type to add to my collection. I did have the benefit of a loan of a commercial hive about 4 years ago, and I found it suited the bees admirably, so I am delighted to have the opportunity again to enable me to give sensible comparative information to my beekeeping students about the different hive types. 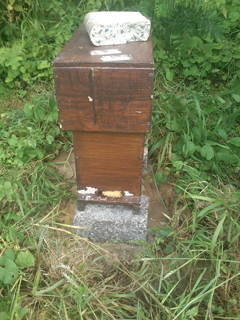 In fact, I was expecting a cast (secondary swarm) from my top bar hive last week, which indeed eventually arrived in my bait hive. I was able to transfer this to the Commercial nuc box as a precursor to moving it to a full size Commercial brood box later in the summer, so by the autumn will hopefully have some information to share. So far, the bees in it are doing well and seem happy with their new home.

So why, as a beekeeper, do I allow my bees to swarm? After all, it is surely our unwritten duty as beekeepers to prevent our bees from swarming, so that we do not lose them into the wild, where they might well die if untreated for Varroa, or worse, enter someone else’s property, from which they will then have to be retrieved. I have two colonies which I do absolutely nothing with – other than monitor for the need for, and provide, extra space. These are in the Warré hive and the top bar hive. 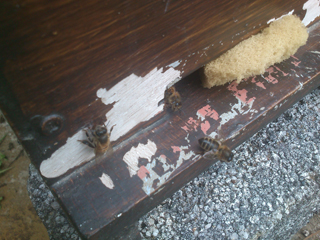 These are run along the lines of what is termed “natural beekeeping” where the bees are allowed to do what they would do in the wild. I don’t treat for Varroa (which they appear to control very well on their own), I let the bees build their own, unframed, comb – and inevitably they swarm. Because that is what bees do! They swarm to propagate the species. Admittedly, we as beekeepers can intervene and control how that swarming process is managed with the traditional hives that we use but the idea (or one of the ideas) of natural beekeeping is that we do not intervene.

However, we need to ensure that the bees are likely to stay in the apiary until caught and hived, which is why I do my daily walk-abouts and why I have my bait hives. Once caught and hived, the swarm will establish a new colony and the queen (who is the old queen from the swarming colony, unless it is a cast with a virgin) will hopefully be superseded in the autumn, ie she will be replaced by a single queen cell being raised (totally different from swarm cells) and nurtured through to emergence, mating and laying alongside her mother (the old queen). At some point the old queen will then be despatched by the bees and the new queen will be the mother of the colony from that point on. 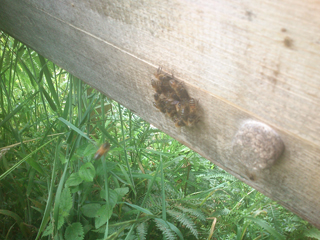 One more thing – my wild flower “meadow”. The phacelia has been flowering for over a week now and is alive with bees of all types – brilliant! There is, as yet, no sign of the 7,000 poppies whose seeds we spread at the same time as the phacelia, nor the borage, so maybe they’ve been crowded out by the other growths like grass and what is either rape or charlock. However, the bees like this as well, so they are enjoying a picnic on their door-step, so to speak, at a time when there is not so very much else around – what we beekeepers call the “June gap”.

So the message to everyone who wants to help the bees is to sow seeds of flowers and plants that flower in June, to fill this gap in mainline crops. At this time of year the bees are at their most numerous in the hive, so have plenty of mouths to feed apart from their developing brood. It is therefore a critical time for them and if the beekeeper has removed a “spring crop” of honey, it is essential to check that the bees don’t starve when the weather is as it is at the moment, cold-ish and wet.

Swarms will still be around until the end of the month, though fewer hopefully, so please continue to keep your eyes peeled – and thanks to those who have phoned to let me know of swarms they have seen or found. Keep up the good work!