Well, what a month August has been! Rain, high winds, sunshine – the bees don’t know whether they’re coming or going! They do appear to have finished their swarming season at last though!  I have actually run out of equipment to hive any new colonies, so that is just as well.

Click here to see movie …     Use < back one screen to exit.  I’ve now moved on to the point of removing the honey crop from some of my hives – but, as ever at honey removal time, I have to be careful not to remove any honey the bees might need.  There was a notification from the National Bee Unit (NBU) last week warning of potential starvation in colonies.  The bee inspectors have noticed whilst going around different apiaries that a lot of colonies were short of stores, so they sent out this notification.  There have been similar emails over the past few years but they normally come earlier.  I used to think it was to do with what is known as the “June gap”, a time of year when the Spring flowers have finished doing their thing and the Summer flowers have not yet started, but as the seasons appear to be moving I am leaning more towards climate change as being behind it now. 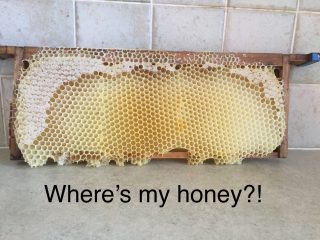 From what I have extracted so far it looks as if my honey crop will be about half of what it was last year.  The reason for this is seen quite clearly in the honey combs.  During the warm, sunny weather the combs were filled with honey, which the bees then capped to preserve.  But when the weather changed and the bees couldn’t collect nectar they ate the honey from the base of the combs upwards, since this honey was closest to their brood nest.  This left an arc of sealed honey across the top of the comb with emptied cells underneath.

When the weather improved again the bees filled the empty cells with nectar which was converted to honey.  But because of the mini-flow that occurred at the end of July/beginning of August they were too busy foraging to cap these lower cells, so my combs now have a combination of sealed and unsealed honey.  As long as the contents of the unsealed cells do not drip out when the comb is held horizontally and given a quick downwards shake, it is ripe for extraction – which is the case with mine.  Whilst I don’t like to think of what my honey crop might have been had the bees not needed to use it to survive, it does justify my move to later honey removal than usual.  It also explains the email from the NBU.  For smaller colonies in particular, removal of the honey supers can be tantamount to removing the bees’ only source of food and they will starve if it is not possible to get out to forage or if there is no forage to be gathered.  So, my poor honey crop is understandable – the bees have been having to eat their surplus stores to survive, which is fine by me as long as they do survive.

Talking of survival, you may recall that I am a nominated “Sentinel Apiary” in which I keep a look-out for evidence of exotic species such as Small Hive Beetle and a mite called Tropilaelaps Clareae, the latter being a little like Varroa in terms of its effect on the bees.  As part of this sentinel activity, I submit debris samples from my hive floors twice a year, in June and September.  In June, analysis of my hive debris showed “No evidence of Varroa” 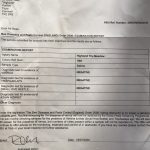 Wow!  What a letter to receive (I have had such a report once before) for somebody who does not treat his bees with chemicals!  My bees have been treatment-free for 11 years now, so it just goes to show that, given the opportunity, bees can actually look after themselves – as they have been doing for millennia anyway– and that they can co-exist with, or even control, Varroa if they are allowed to.

A lot of people say to me “It must have been a good year for the bees with all this hot weather we’ve had”.  Well, up to a point, yes it has been a good year for the bees,.  I have increased my number of colonies, so there are a lot more bees around, which is good ecologically, but the season has been rubbish as far as consistency of nectar production is concerned.  Plants can’t secrete nectar if there is no moisture in the soil, which means the bees have nothing to convert into honey, resulting in a poor honey crop, and this has been the case on and off throughout the summer.  As I’ve said before, the bees don’t know whether they’re coming or going.  One minute there is a nectar glut and the bees are feeling secure and confident enough to swarm, the next they are having to eat through their surplus stores in order to survive because they can’t get out to forage or there is no nectar being produced.  So, no, certainly where I live it has not been a good year for bees in terms of honey production, though I understand that in mid-Cornwall and up in North Cornwall beekeepers have fared better – but I’d much rather live where I do and put up with the inconsistencies of climate change! 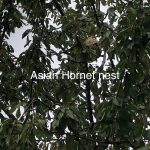 From Monday 7 September to Sunday 13 September is Asian Hornet Week, hopefully not a week for the Asian Hornets to be having a party but rather to raise or heighten awareness amongst the public of the impending presence of this exotic pest.  Asian Hornets (Vespa velutina) make primary nests at a fairly low level, say in a bush or inside a building, followed by a secondary nest at extremely great height, normally in heavily-leaved or evergreen trees, so are difficult to spot. 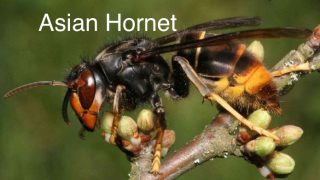 But now is the time of year when anything up to 500 new queens are produced in the secondary nests and these will mate before going off to hibernate for the winter, emerging in the new year to establish ever more colonies.   They may be seen on flowering ivy and fallen fruit but also hawking honey bees outside their hives.  As at the end of June 2020, there have been no confirmed sightings in the UK whilst four were seen in 2019 and their associated nests found and destroyed.  But it is only a matter of time or indolence on our part before they could become as established here as they are in the Channel Islands, France, Spain, Portugal, Belgium, Italy and Germany.  The Asian Hornet is about twice the size of a honey bee, has an orange face and a dark abdomen with a thin, yellow fourth segment.  Its thorax is entirely dark brown or black and velvety, whilst its legs are bright yellow. 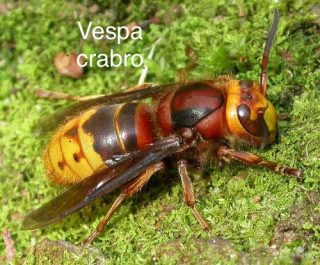 If you are on Facebook, you will have doubtless seen the article from Cornwall Live talking about the Asian Hornet and showing a photograph of a European Hornet!  Do not confuse the two.  The European Hornet (Vespa crabro) looks like a large wasp in colour, viz yellow banded abdomen with brown legs and generally is a lot less aggressive towards both man and bees than the Asian Hornet. 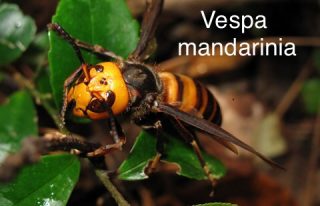 You may also have read reports or heard about the so-called “Murder Hornet” (good headline material, what?) which is the Asian Giant Hornet (Vespa mandarinia) and is neither related nor present in the UK nor Europe.

There were two sightings of the Asian Giant Hornet in North America in 2019, in British Columbia and Washington State.  They are about 3 or 4 times the size of a honey bee and have an orange head, dark thorax and an abdomen which is banded yellow, black and brown.

So there we are.  Another month nearer Christmas (should I not have said that?!) and coming to the autumn of the beekeeping season.  Still lots to be done in readiness for winter and hopefully some sunny weather to enable that.  Please keep an eye open for the Asian Hornet though and either let me know in the first instance or contact the Non-native Species Directorate with a photograph at alertnonnative@ceh.ac.uk so that appropriate action can be taken.

Enjoy the rest of the summer – and keep safe.