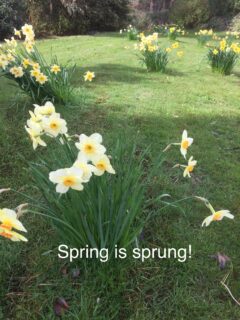 As I look out of the window today, the sun is shining and it looks like a beautiful Spring day.  In reality, there is a cold wind blowing and this is stopping my bees from getting out to bring home the early pollen from the likes of pussy willow, aconites, snowdrops and gorse.  However, they have had lots of opportunity in the past month to get out on the sunny days and all colonies appear to be thriving and expanding at a phenomenal pace.  Obviously, I won’t be able to confirm that until the weather warms up to what we call “shirt sleeve” weather, otherwise there is a serious risk of killing a lot of developing brood by exposing them to the cold and possibly even causing the demise of the queen.  The bees have not been disturbed all winter (and this winter has seemed particularly long), so to open up the hive now risks panicking the bees into clustering round their queen to protect her.  The outcome of this is generally that she then dies from over-heating.  I had this happen to me once, many, many years ago, when I decided to change the floor of a particular hive during March, when the weather had been quite sunny and warm.  Unfortunately, it was too early from the bees’ point of view and they duly rushed to protect the queen and ended up killing her.  I now will not contemplate changing a hive floor until well into April at the earliest because by this point the bees have been flying long enough and in sufficient numbers for them to be used to not being “locked up”, so any intervention is better tolerated

The purpose behind changing a hive floor is basically one of apiary hygiene.  During winter, the bees will have been uncapping stores and letting the cappings drop to the floor.  Whereas during the season the bees are very tidy and house-proud, during the winter it is too cold or wet for them to get out of the hive to dispose of this rubbish, so it stays on the floor. This is also true of any bees that have died of old age in the hive.  They have just fallen from the winter cluster and remain on the floor until it is warm enough for the undertakers to carry the corpses out and away from the hive for disposal.  This is work which diverts the bees from the important job of gathering nectar, pollen or water, so if we beekeepers can help the bees in their house-work by changing the floor for a clean one, it both saves the bees having to do unproductive work and lowers the risk of disease developing from any decaying detritus. 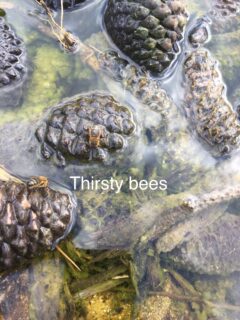 I mention water. Water is very important for bees on two fronts.  The first is for maintaining the correct humidity in the hive.  Humidity is very important in the development of brood and, of course, queen cells and the bees maintain the correct humidity by evaporating water within the hive and moving it around by fanning.  This is one of the reasons it is so disruptive to examine a hive by removing frames from the brood box during a hive inspection.  However, that is something that a beekeeper might need to do in order to be able to assess the state of the colony and its queen, to be able to check for disease and to check for adequate stores.  But it is very disruptive to the bees and their ability to maintain ideal conditions for colony development, so should always be done considerately and as rapidly as possible (without rushing!).  It can take a colony anything in the region of 48 to 72 hours to re-establish the ideal brood nest conditions required after beekeeper intervention.

The second reason water is important – and the main reason at this time of year – is that the bees need to dilute the honey stores, which will be mainly ivy honey.  Ivy nectar granulates in the comb and can become as hard as concrete sometimes, so the bees need plenty of water to dilute it back to a state that can be used to feed the developing larvae.  Whilst the bees generally use their saliva to dilute their stores, this is very wearing on them, so they can be seen on my bird bath on sunny days, drinking up the vital fluid to save their salivary glands from being over-worked.

In the second week of March, I was doing my normal walk-about in the apiary at about midday, when I heard the unmistakable sound of a swarm!  It wasn’t particularly loud but was definitely identifiable.  Then I saw it!

Bees covering the front surface of one of my hives and a very small cluster settled (more or less) on the trunk of a tree next to the hive, with lots of bees flying in a swarm-like manner in front of the hive and the tree. 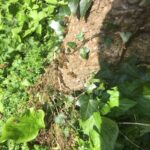 I parted the small cluster with my fingers to see if I could see a queen but she wasn’t there, so I left them to it and went back later to check the situation.  One hour later, all was back to normal, so I just shrugged my shoulders, thinking, well, the bees are a law unto themselves, maybe there were so many of them in the hive that they just wanted some fresh air outside on this particularly warm, sunny day.  When I went out to check the next day, though, there was that sound again, but this time the bees had clustered on a breeze-block on a stand adjacent to their hive. 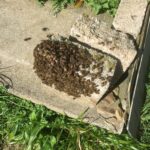 Again, I parted the cluster with my fingers and lo and behold, there she was – the queen!  I went to my bee-shed and retrieved a poly nuc box, after placing some partly drawn combs inside, and took it back to the apiary.  I then set the nuc box on the breeze-block, with the entrance to the nuc right by the swarm – and waited. 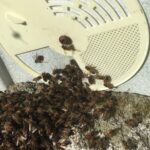 Yes, one or two bees were showing some interest at the entrance but weren’t going inside and weren’t fanning, so the queen wasn’t in there.  The bees were showing a lot of interest in the roof of the nuc, though, so I removed this and turned it over so that the bees on the roof were now more easily able to access the combs inside.  Again, I waited, then turned the roof over again – and there was madam!  I immediately place her in a queen cage, placed the cage on the floor of the nuc, replaced the roof, and again left them to it.  When I returned later, there were no bees outside – they had gone inside to look after their queen, so job done!  Almost!

Later that afternoon I went back to check things out and nothing had changed, so I opened up the nuc, removed the queen cage (which was by now covered in bees trying to reach the queen), opened it up and let the queen emerge onto the top bars.  I replaced the roof and closed the entrance to a queen excluder setting to prevent the queen (and therefore the swarm) from leaving and again left them to it.  The following day, on my return, there were lots of bees congregated around the entrance, some of whom were doing waggle dances. 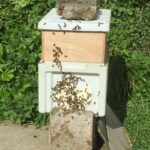 The waggle dance is used by the bees to indicate the location of a forage crop or, as in this case, the location of a site for a swarm to occupy – they still wanted to go! – which was why I had set the entrance to the queen excluder setting, just in case.

I then turned my attention to the hive from which the swarm had emerged.  There were no flying bees, which was worrying.  I opened it up and not a bee to be seen, nor brood, nor queen cells – nor stores!  It was a starvation swarm, despite there being fondant over the crown board for them.  I immediately placed another block of fondant on the feed-hole of the nuc but unfortunately I think this colony is doomed.  There are not enough bees to support the queen and to look after any brood she might lay since most of them are old, over-wintered bees, whose nurturing glands have atrophied.  I could possibly help the situation by placing a frame of emerging brood and some young bees from a strong colony in the nuc, but at this time of year I am unwilling to risk losing another colony by messing around with their brood nest and either causing balling of the queen or chilling the brood.

So, we’ll wait and see.  If the weather warms up it might be possible to do something to help.  Otherwise, I’ll just chalk it up to my winter losses which in beekeeping generally can vary from 10% to 30 or 40%, so losing one colony is pretty good going – but winter’s not over yet by a long chalk! 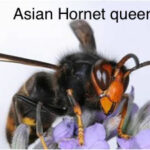 The over-wintered queens are now coming out of hibernation and will be looking to establish new nests for the coming season.  Please keep your eyes peeled for the distinctive colouring of what might casually be taken for a queen wasp 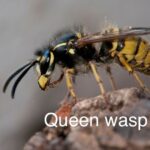 (of which many are also coming out of hibernation now and also looking to build new nests) and get in touch if you see one (Asian Hornet, that is).  Otherwise, send an email to alertnonnative@ceh.ac.uk

Until next month then, as ever, keep your eye out for swarms and please get in touch if you see one.