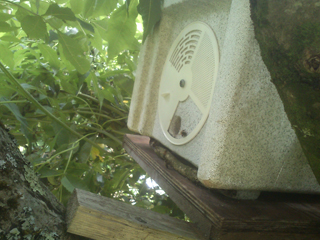 Well, it’s been another pretty hectic month! The first 10 days or so we had to be away in Wales for a family funeral and to provide support after the event, so before wee left I went round all my hives and checked that they had sufficient room for the queen to lay and plenty of space for nectar storage prior to its conversion to honey. That way, I felt, the likelihood of swarming would be nil, as I didn’t want a swarm escaping my notice and potentially causing problems to others in my absence.

However, on our return, whilst checking the apiary to make sure all was as it should be, I found a swarm had occupied one of the bait hives in the apiary. This just shows the importance of having a bait hive or two in your actual apiary where they can be easily checked on a daily basis and any home swarms will find them first before starting to look for chimneys and the like.

Going through the bait hive brood box the next day, it was apparent that the swarm had only issued the previous day or maybe the day before that, as there was only a small amount of new, drawn comb to be found. When captured, a swarm can draw new comb very quickly, even drawing an amount about the size of one’s hand overnight, as they are extremely eager to have space for the queen to lay and to store the honey and pollen they have brought with them after their departure from home. 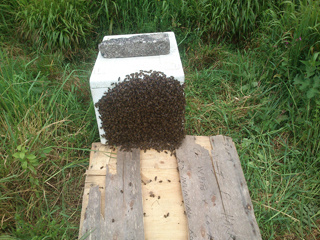 My 10 day absence meant that the 8 days it takes for a fertilised egg to be made into an embryo queen in a sealed queen cell was well within the bees’ capability to achieve without my knowing since I was away – they can be quite devious sometimes! As is my practice, I immediately transferred the bees onto fresh starter strips in a polystyrene nucleus box and replaced it in the tree in its original position. This has allowed the bees to draw full frames of comb and they are prospering in their well-insulated abode. I will shortly move them into a full-sized brood box and transfer them to one of my out-apiaries, where they will be able to build up in plenty of time to a full-sized colony with plenty of winter stores capable of being amassed during autumn before the winter proper descends.

I used another of my poly nucs to make a nuc of bees with a new queen earlier in the season (about 6 weeks back) and they are now hanging in a beard outside the entrance because the weather has been so hot and their queen has laid so much brood that the hatched bees have insufficient space in the half-sized box. This happened last year with a nuc I was preparing for an ex-student of mine. Once she had located the nuc in her apiary, the bees promptly threw a swarm!

I was concerned the same thing was going to happen again, so I checked the colony and found bees not only hanging outside the entrance but also hanging below the open-mesh floor! They must have been really cramped – but no sign of queen cells! They were obviously happy enough in their insulated home and weren’t going anywhere. Well, unknown to them they were – I transferred them to a full-sized brood box to give them space and they have settled in very happily – and there is no hanging around outside the entrance in large clusters any more, so I can relax a little on this one. 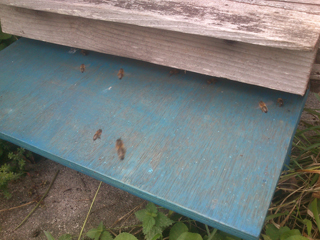 I have been taking honey supers off my hives during July, though not all of them full, as bees are not so defensive of their honey stores when there is a nectar flow in full swing. If I wait until the nectar flow stops, sometime during August usually, then I can expect a warm welcome from my charges should I venture to remove their precious stores within a week or so of the flow coming to an end! I’m delighted to say that there is enough honey for me to claim that I have a 2017 honey harvest – and there is still more to come.

It’s interesting, however, to see how the hives vary from one to another – they are all in the same (home) apiary, they have the same treatment, the same micro-climate, the same access to forage, and yet they still vary considerably. Why? It is really down to the queen. How old is she? How prolific is she in her egg-laying? Who did she mate with – my black drones or someone else’s?

There are so many factors which make beekeeping exactly what it is, a fascinating, non-repetitive activity, wholly unpredictable in its outcome (mainly because “bees do nothing invariably”!) and so totally absorbing and compulsive. Yes, it would be nice to have each of my hives producing 100lb of honey each season but wouldn’t that be boring and predictable?

I was talking yesterday to a fellow beekeeping teacher who lives in the Bodmin area who has hives in out-apiaries just like I do, and they vary considerably in the honey yield from location to location just like mine. Whilst he is talking about yields of 40lb per hive – and even more in some of his out-apiaries – he told me that the Bodmin Beekeepers’ Group Apiary did an inspection last week to see what honey they might be extracting – and all the hives were virtually devoid of surplus honey! 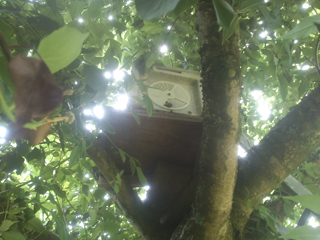 And yet he keeps bees in the same general area as the Group Apiary. Fascinating! Of course, it doesn’t help in my case that most of my hives are more or less on the coast, so they have half the area available to them to forage compared with inland sites.. I’ve said this before, but it isn’t an issue with me as I can’t think of a better place to live than on on the Roseland Peninsula coast – even at the cost of reduced honey yields!

The swarming period is now coming to an end, though there still might be be the odd one or two “late-comers”, so please do continue to keep your eyes peeled for the odd swarm hanging in a tree or shrub in your garden. Let me know and I’ll arrange for it to be removed by a beekeeper near you and we’ll all be doing out bit to preserve the life-blood of the human race.