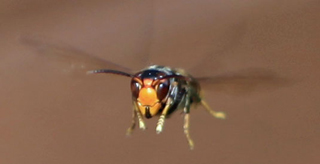 So here we are at the end of July – the month that offers the honeybees their main opportunity for a honey harvest. Unlike last year, the weather has not only been hot and sunny but there has been a reasonable amount of moisture in the soil, allowing plants to produce nectar. So, whereas a couple of months ago I was telling everyone that this year was going to be another poor honey harvest because of swarming and weather that was too hot and dry, I have ended up with, not only a large increase in my colony numbers, but also a honey harvest unlike any I’ve had for a couple of years!

When bees swarm, they not only divide the colony in two (approximately) but also fill up on honey before leaving, as they don’t know when they will next have a home in which such stores can be retrieved. The bees that are left behind are generally so depleted in numbers that there aren’t enough foragers to gather a surplus honey crop and even if there were enough of them, any nectar gathered would be placed in the brood box to replace what had been taken by the swarm. This means a poor, if not non-existent, honey harvest for the beekeeper and a weaker colony having to prepare for the winter months ahead with fewer bees. 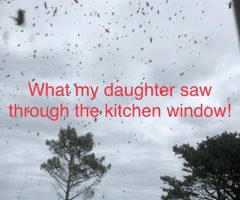 This year, however, the swarming took place so early on in the season that colonies were able to make up the shortfall in bees and stores in plenty of time to catch what we call the “main flow”, in July. As a result, as I said earlier, not only do I have more colonies from swarms around the Roseland and from my colony splits (I also caught all my own swarms at home in bait hives or by spotting them hanging in a cluster, waiting for their scouts to find a new home) but I have had a decent honey harvest to boot. What a happy fellow I am!

I tend to take off my honey whilst the flow is still on, which means the forager (adult) bees are out in the field gathering nectar and so not at home to defend the colony from robbing beekeepers! Last Sunday was a warm, sunny day with bees flying as if collecting nectar before the weather was forecast to close in on the Monday, so I decided to take a super off one of my hives so that I would have something to do during the wet weather viz extract the honey. Well, if I did! Either I was totally wrong about what the flying bees were doing, and they weren’t out foraging after all, or they had an idea that thunder was on the way (which they do not like and which winds them up no end!). 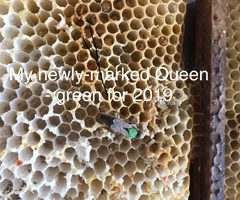 Whatever it was, they absolutely covered me – from head to toe! – making it quite clear what they thought about my raiding their hive. I was stung countless times on the back, on my legs and on my arms – all through the bee-suit that I was wearing (although, in fairness, I only had shorts and T-shirt underneath so that when I perspired in the heat the bee-suit stuck to me, making me an easy target!). I quickly beat a hasty retreat, replacing the supers I had removed apart from one, which I took, with all its frames, back towards the house.

By the time I reached the house, the flying bees had left the super and gone home, leaving just the young bees behind who cannot sting, so I was able to clear the combs of these bees and take the cleared combs into the house. But what a palaver! I have only had this happen to me once before in my beekeeping career and that was about 15 years ago. Anyway, I had my super of honey and once I have finished writing this I will be extracting it. But it just emphasises the point that, once the flow has stopped, we need to give the bees a week or so to get used to being idle. After all, they have been working like billy-o for the past few months and the enforced idleness means they are looking for something to do – like pounce on unsuspecting beekeepers! 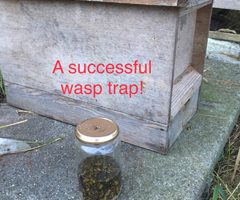 Wasps have been a big problem again this year, as they were last year, and they are a lot earlier than usual – because of the hot weather, I guess. They have been attacking two of my weaker colonies (basically, small nucs), to the extent that, despite wasp traps being placed around the apiary and attracting many wasps to their deaths, the bees were becoming totally demoralised and not fighting back. I therefore did a colony switch on both of them, placing a strong colony on the site of the nuc and placing the nuc where the strong colony was.

This has the effect of evening out bee numbers, in that flying bees will always return to their original site, in this case boosting the number of bees in the moved nucs and giving them a better chance of defending themselves. Although, in general, bees are hive-specific, as long as a bee that is seeking entrance to a strange hive has a useful payload (nectar or pollen), it will be welcomed in and may or may not become part of that colony. In this case, the incoming bees will remain with the new colony, since that is where their satnavs are programmed to. 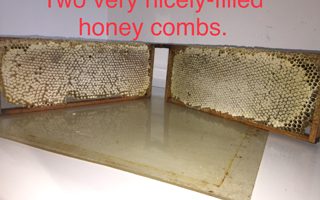 Whilst my daughter and husband were staying with us at the beginning of the month, she came into the house one day and said “There’s a lot of bees flying around outside”. That normally means just one thing to a beekeeper and, sure enough, it looked like a swarm was trying to get into the void above our bay window in the living room.

How embarrassing would that be for a beekeeper?! So off I go, up onto the flat roof, hammering down the lead flashing to make sure the bees couldn’t get under it and blocking off the gaps behind the guttering to stop them from finding a way in. I then placed my swarm box on the flat roof and (whilst I was out, of course!) the swarm arrived and fortunately chose my box rather than the roof void. Phew!

So that’s my excitement ration for this month – multiple stings and a swarm trying to get into my roof! These bees have certainly got a cheek! 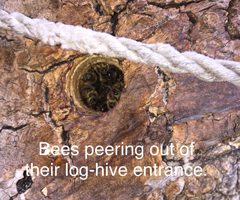 Whilst the swarming season is officially over that doesn’t mean there won’t be any more – bees do nothing invariably, remember! So keep your eyes open for those “bunch of grape” clusters hanging in trees or bushes and give me a call if you see one. Similarly, watch out for the Asian Hornet – one was spotted and confirmed in early July in Hampshire, so they are still trying to establish a foot-hold over here. The National Bee Unit is currently doing a detailed search of the area, looking for the nest, as now is the time of year when the hornets are most active, hawking in front of beehives and attacking returning foragers, whilst back in the hornet nest next year’s queens will shortly be being created, something we definitely do not want.