Well, yet another manic month!  The bees have loved it and whilst mine have been behaving as they should there has been a lot of activity swarm-wise away from my home apiary.

You may remember last month I said that, after replacing my bait hive on my friend’s shed roof, there had been bees sniffing around the entrance shortly after.  Well, you might not be surprised to hear that, yes, another swarm did arrive in the next couple of days.  That was the fourth swarm in that bait hive this year.  They are now happy in a nucleus hive.

I was asked “Why do you want another swarm?”.  Well, to be honest, I don’t, as I have expanded my apiary with splits and nucs sufficient for my needs, but if I don’t pick up these passing swarms then they could end up in someone’s chimney or roof space and I would still get a call to come and remove them, something which is not always possible.  I also like to have fresh genetic material in my apiary each year, especially if they are black bees.

So there you go, another swarm brought home and transferred to a proper hive and the bait hive returned to the shed roof.  Even as I was replacing it there were two bees flying around the entrance as I was setting it up, so there are obviously bees in the vicinity, whether wild or “domesticated”.  Two of the four swarms have been quite black in colour, so I am hopeful that these are from wild colonies. 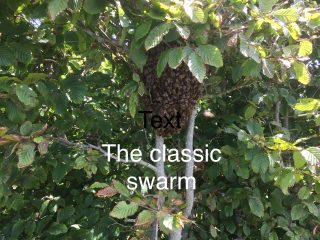 It was now getting rather crowded in my apiary, so I phoned the two farmers where I have my out apiaries to check that they were happy for me to bring more bees over.  Yes, they were, and I asked one of them whether any swarms had occupied the empty hives that I had left there over winter after the bees had died out.  He said he’d check and was back to me almost immediately to say there were definitely bees in one of the two hives and possibly bees in the other, so I arranged to go over that afternoon to check things out.  Then, just before lunch, another call to a swarm in a garden hedge. 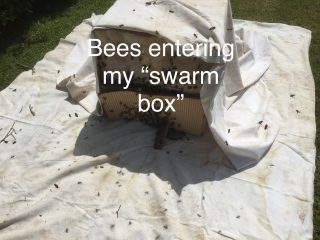 I arranged to collect that on the way to the farm in the afternoon and duly did so.  It was a caste, or secondary swarm, but still worth having – it would have a new queen (unmated as yet) so wouldn’t have the problems that might result from having an old queen who was perhaps getting past her prime – and she could mate with some of my black drones!

Then on to the farm, where I found, yes indeed, a very active colony in the first hive and a similarly active colony in the second one as well.  I did a quick check on the first one – they needed a super, so all was well – I would take one over the following day.   Then on to the second colony – but I couldn’t lift the roof off it was so heavy!   I realised that the bees had most likely entered the roof space and built comb in the roof, which was why it was so heavy, so very carefully tried again to lift the roof straight up before turning it over – and there was a sight!  Thousands and thousands of bees all tending to what looked like at least five pristine, white combs – I couldn’t really tell at this stage as there were so many bees!  Beautiful! 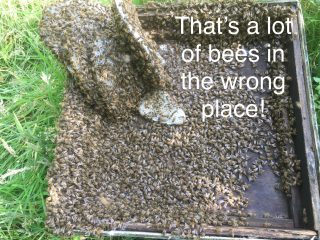 I hadn’t expected this, so had no honey buckets nor empty frames with me into which I could put the combs. Nonetheless, something had to be done, so I cut the combs away from the roof and placed them on a crown-board that I had with me to take them home.  Odd though, because there was no brood, only honey, in the combs – the brood must have been in the brood box and with no super they must have decided to make the cavity under the roof into their honey store.  Once the combs were all removed, I tipped the bees back into the brood box and closed the hive up, thinking that on my return the following day a super would be needed on this hive as w

I was really pleased!  Two more colonies created by passing swarms and I didn’t have to do any bait hive transfers or inter-apiary hive swaps.  So the following day I returned to the farm with one of my home colonies, set that up, then put the first super on the first hive, no problem.  I then approached the second hive but only saw three or four bees flying in, out or around the hive.  How strange!  On opening up the hive I realised why – the colony had de-camped, absconded!  Ah well, nothing I could do about it. I placed the super on the hive anyway and closed it up, somewhat disappointed.  Never mind, from every negative there is a positive to be found and on this occasion the positive was that I could use the empty hive to house one of my growing nucs.

However, on returning home I found another swarm in my tree bait hive, so I resolved to close that up that night, place it in the garage, and take it over to the farm the following day instead of using a nuc.  This I did, but as I approached the empty hive at the farm with my bait hive swarm, I could see scores of bees flying in and out of the “empty” hive!  The bees had obviously spent the night outdoors and decided that perhaps the hive they’d abandoned was a better bet and had returned! 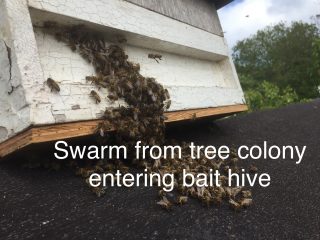 This is not unusual, as the same thing happened to me last year with my log hive.  Both times it was because the colony had been headed by a virgin queen and such ladies can be very fickle and fussy!  I knew in this case we were talking about a caste with a virgin queen again as once I had transported the cut-out combs home the previous day, I confirmed there was only honey and no brood in them and on examining the brood box found there was neither brood nor stores present.

Back home with the bait hive and its occupants – still locked in, poor things and having to
put up with two car journeys unnecessarily.  They wouldn’t be very happy!  But they were
fine.  I put them into a nuc box (it was only a small swarm) and they were relieved as
opposed to angry, I would say.  Phew! What a kerfuffle!

But it wasn’t all over yet!  The next day I had a call from the farm to say there was a swarm in the stables!!  Not from one of my three colonies there, hopefully, but we’ll see.  They were flying in and out of a knot-hole at the back of the stable and were obviously inside the cavity wall (luckily a wooden stable with wooden internal cladding).  I set up a one-way valve/bee-escape over the hole on the outside, then drilled a hole through the inside cladding  – and smoked for all I was worth!  The roar that resulted had to be heard to be believed but they duly came out and flew around the valve trying to get back in.

There were quite a few bees there, so I set up a nuc box on a plank going from the neighbouring shed roof to a pipe just below the knot-hole in the stable.  I had some combs in there from a nuc that had developed into laying workers and so had some sealed brood in it – and the bees poured in immediately, which surprised me, never having used such combs before. 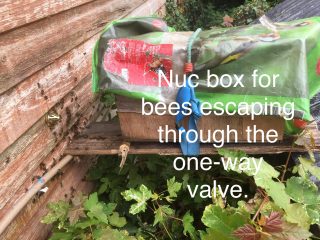 I left them overnight and returned the following day to find lots of bees flying around the one-way valve but still roaring bees inside when I smoked them.  Perhaps the queen couldn’t get out through the valve.  So I removed the valve and smoked again but though a lot more bees came out there was no sign of the queen.  I replaced the valve and left them to it again hoping that the bees in the nuc box would entice the queen to join them – after all, the swarm had now found a very desirable home in the nuc box! 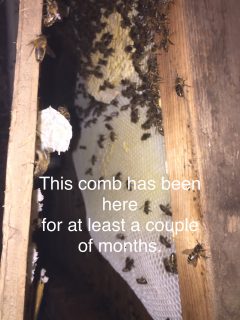 A few days later (I do have a life to lead, apart from beekeeping – though Lin is not so sure!) and I returned to find bees everywhere – inside the stable, around the nuc box, around the valve.  Nothing for it but to remove the internal cladding.  Crow bars, metal pole, brute force and plenty of ignorance finally removed it to the point where I could see the bees – and sheets of comb!

This wasn’t a swarm it was an established colony!  It must have been there for about two or three months!  Change of tack.  I moved my nuc box from the outside of the stable and balanced it on the panel edge and purlin of the stable wall – and smoked.

I cut out the comb (two feet long by fifteen inches across) and tied it into empty frames and placed these inside the nuc box (I was pleased to see brood in these combs, as this would attract the bees into the nuc box).  Smoke and cut, smoke and cut.  Eventually all the comb was removed and placed in the nuc box – which was obviously now too small for the colony. 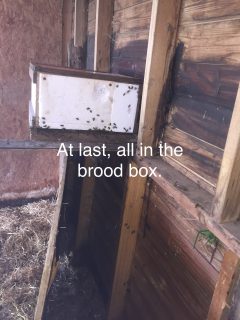 I left them overnight, some in, some outside the nuc box and returned the next day with a full-size brood-box.  I transferred the combs from nuc to brood-box and the bees that were outside unable to enter the nuc overnight poured into the larger box.  Job done!

I returned that evening and all the bees were inside, so I wrapped it up, brought it home and
it is now in my home apiary enjoying the new surroundings.  Throughout all my smoking and hammering and comb-cutting the bees had behaved admirably – no indication of a wish to sting, just flying around wondering what was going on.  It could have been vastly different!

So, an exhausting month when in fact things should be slowing down.  I’m bee’ed out!  But I do have some lovely black bees and some pretty large colonies getting ready for winter, so I am well-pleased.  Now perhaps I can get back to the part of my life!

If you see a swarm (and it’s still not too late in the season for the odd one here or there), do contact me (yes, seriously!) and I will arrange for it to be collected.  Similarly, if you see a strange looking wasp-like creature (possibly an Asian Hornet?  See earlier Beeman-ia blogs for details), don’t ignore it, get in touch and we’ll see if the sighting should be taken further.