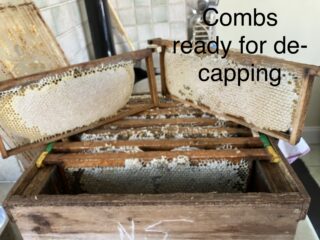 At last , Summer has arrived! A bit late but never mind, it’s here now.  The only problem is, of course, that with the very hot weather the grand dries out and the flowers stop producing nectar.  This means the bees have sting to collect to make their honey and a lot more of the foragers stay home (because there’s nothing to bring in from the flowers).

This means that the hive can sometimes become over-heated and we find clumps of bees “bearding” outside the hive to give a little air to those inside. 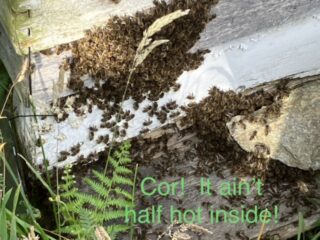 More importantly, though, without an inflow of nectar and pollen, there is nothing to feed the developing brood, so the bees stop the queen from laying.  This can give the appearance that a hive is queenless and I get a number of calls and emails at such times about “queenless” colonies – “What shall I do?”.  “Do you have a queen I could buy?”.  Invariably, once the flow restarts everything gets back to normal, but I have had to feed a couple of my smaller colonies to get them through this dearth.

With the start of the hot weather, before the ground started to dry out, the bees were foraging for nectar as if there was no tomorrow.  This has resulted in my having to add additional supers to my hives to accommodate not only the honey the bees made but also the nectar they were bringing in to convert to honey.  Nectar is a very dilute sugar solution made up of 80% water and 20% complex sugars (sucrose mainly).  Honey, on the other hand, is only 18% water with the remaining 82% comprising of fructose and glucose amongst other things.  This means the bees need a lot of space to store the nectar prior to conversion (a factor of three to one), which is where a lot of new beekeepers underestimate the amount of space required.  Not only that, but the bees will also sometimes use empty cells in the brood box to store their nectar, filling cells which are then not available for the queen to lay in.  This is even more likely to result in swarming.  So the rule is to always ensure there is plenty of space, both for the queen to lay her eggs in and for the bees to store their nectar and honey.  If enough space is not given in plenty of time, the bees will likely swarm, as they think they need a bigger cavity in which to live.  As I say to my students, “Read the bees!”. 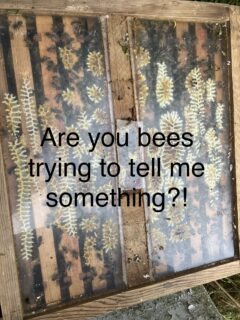 Over the past week or so, I have either been adding supers to those colonies that needed the extra space or I’ve been harvesting honey from those colonies that had full supers, replacing the full combs with empty ones.  There are different approaches available for removing honey from hives.  One approach is to place a crown-board equipped with bee-escapes (basically one-way valves) underneath the top super to be removed.  Overnight, the bees in the artificially isolated super will crawl down through the bee-escapes into the lower boxes, where the scent of the queen is.  After 24/48 hours the top super should be empty of bees and can be removed in its entirety.  One drawback to this approach is that if there is uncapped honey in the super then the bees will tend to hang on in there until the job is done, so it is not a guaranteed method of removing bees.  Whilst I used this method in my early beekeeping days, I now prefer to remove the full combs one by one, shaking or brushing the bees off the face of the comb back into the open hive, and placing the removed comb into an empty super on my hive barrow.  The super sits on a crown-board and has another crown-board on top, to prevent bees chasing their honey.  It means I don’t have to lift a very heavy super off the hive, at an awkward height and with my arms outstretched, possibly resulting in damage to my back.  “Beekeepers’ back” is a common ailment among the beekeeping community!  The space in the super on the hive is then filled with an empty combs or frames with starter strips for the bees to either fill with more honey or to draw out into comb. 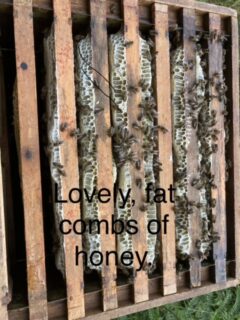 Some beekeepers complain that their bees get nasty when the honey is removed, but as long as there is a nectar flow on, ie the flowers are producing nectar, the bees are so busy gathering all that they can that there is nobody left in the hive capable of defending the honey loss.  Also, everyone is busy, either gathering nectar in the fields, storing it in the comb, fanning to reduce the water content, or sealing the now-converted honey, that there are too many things going on to find time to see off a thieving beekeeper!  If the flow has finished, then the foraging bees have nothing to do and are hanging around the hive, looking for trouble!  You are then having to deal with not only frustrated foragers (who have got the developed sting glands!) but also a much larger colony “at home”. 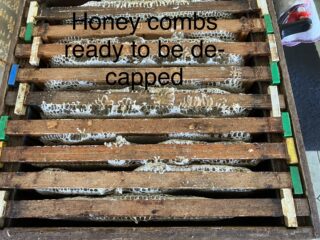 Having retrieved the honey supers from the hives, the next step is to get them back to the house and into a closed, bee-proof room.  The weight of a full super can be anything up to 30lb, so not an easy lift – but a very satisfying one!  It is better to extract the honey as soon as possible – whilst it is still at hive temperature is ideal but invariably I will not be able to extract straight away.  When I am ready, I will bring the super into the kitchen the night before (Lin just loves that!) and place it near the cooker so it warms up to room temperature and extracts more easily.

I have a stainless steel roasting dish (for my use only!) with a wooden bar resting across two opposite sides and whilst balancing the end of the full comb on the wooden bar, slice upwards just under the surface of the comb with a scalloped bread knife, cutting away the wax cappings from the comb so that they fall into the roasting dish below. 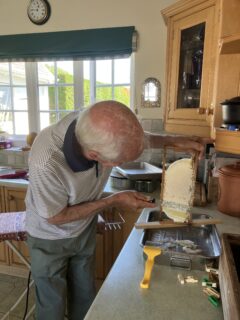 Once de-capped, the comb of exposed honey is then placed in a cage in my honey extractor, with all such combs sitting in the cage like spokes of a wheel.  Once the extractor has its full complement of combs, I switch on the motor which spins the cage so that the honey is thrown out of the combs onto the inside wall of the extractor.   The honey then slides down the wall and collects at the bottom, where a valve can be opened to drain it off.  I use a coarse strainer to remove any loose cappings that were left on the comb and store the extracted honey in 30lb buckets until I’m ready to fill my jars.  This allows the enzymes in the honey to carry on working until they are spent which also means the honey keeps better. 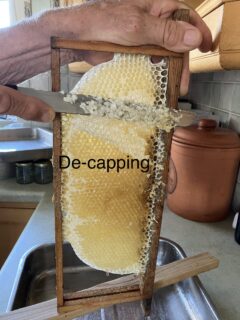 Whilst the weather is so warm and the flowers are producing a nectar flow, the bees generally are not thinking about swarming (except as I mentioned earlier where they are denied enough space), so things have been very quiet on the swarming front this month.  Thank Goodness!, say some!  But it doesn’t mean the swarming season is over.  I expect to be called out to at least one if not two swarms in the next couple of weeks or so, so keep your eyes peeled for anything “out of the ordinary”.  It might be a honey bee swarm or it might be Asian Hornets.  Contact me if you see either and I’ll get it sorted.

In the meantime, enjoy the glorious weather – a long time coming but here for a while yet, by the look of things.