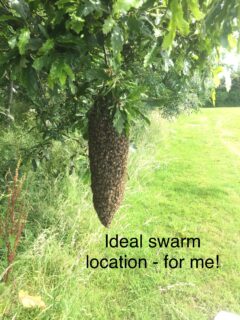 What a month July has been!  I said to Lin at the beginning of the month, “Looks like swarming season is over, I can get back to doing non-beekeeping things now”.  So what happens?  I find three (related?) swarms in a pine tree in my apiary

and I get a call from St Mawes saying there is a swarm in a sun parasol, what should they do about it?!  So here I go again, packing all my kit into the car, when the phone rings yet again.  There’s a swarm of wasps in the village and there is concern they might attack people.  Unlikely to be wasps, more like honey bees, I said, so on my way out of the village I check it out.  Yes, as I suspected, it’s a swarm of honey bees!  Mine, perhaps?  I wasn’t expecting a swarm so I wasn’t sure.  But they’re hanging on a branch right over a brook that runs through the village – not an easy retrieve.  I’ll have a look when I get back. 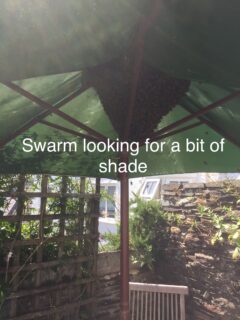 When I finally arrive at St  Mawes, I find exactly what was described – a swarm of honey bees seeking shelter from the hot sun by gathering under this table parasol!.

Could be an easy or a very difficult retrieval, as the bees are clustered round the spokes that hold the shade up, so brushing them down into a box might be a problem and I certainly couldn’t place a box above them.

So first things first. I lift the parasol out of the hole in the table and I notice the cluster is very loose (because it’s such a hot day).  This prompts me to try a sudden shake down into my box, so I place the parasol to one side, bees still in cluster, cover the table with my sheet and place the swarm box, open side up, on the sheet.  I then take the parasol and holding  it with the cluster as close to the box as I can, I give the whole thing a sharp jerk downwards, whereon most of the bees fell from the cluster into the box.  The rest fell onto the sheet, so I turned the box upside down, wedged a stone under one side to make an entrance for the bees to use, and left them to it.  The bees were fanning their Nasonov glands, so the queen was inside and it would only be a matter of time before all the other bees went in and were treating my swarm box as their new home.  I would return at dusk, when all the flying bees had returned and gone inside, and take the bees away to their forever home in my apiary. 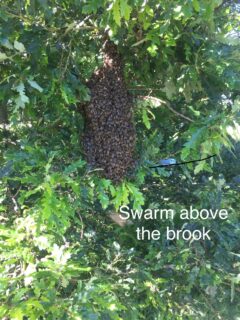 Back to my village swarm. I borrowed a ladder to place in the brook to give me access to the swarm up in the tree and as I was taking a photo of them I realised they were breaking cluster and starting to fly off – they had found a new home!  This saved me the problem of their inaccessible location but where would they end up?  In a chimney or roof space – even more inaccessible!  However, they appeared to be flying towards my garden, in the general direction of one of my bait hives, so perhaps this would be an easy retrieval after all.  I followed them and eventually found them in a blackthorn bush at the top of the lane to our house about 15 yards from my bait hive.  Not wishing to risk them flying off somewhere else, I shook and cut them out of the blackthorn bush into a box, covered the box with a sheet to keep it cooler in the hot sun and again left them to it.  Unfortunately, when I went to retrieve them later in the day they had decamped and they haven’t been seen since..  This is quite usual for a cast (secondary) swarm headed by a virgin queen, as such queens are quite flighty and skittish, so another chalked up to experience.  They’ll turn up one day – somewhere!

A few days later I was informed that yet another swarm had occupied the bait hive on my friend’s shed roof!  We didn’t l know how long they’d been there, so I said I’d leave them until I had chance to check whether the queen was mated or a virgin.  I didn’t want to bring the bees home until I was sure the queen had, or was, mated as moving her unmated might contuse her with regard to the hive location and she might get lost on returning from a mating flight.  In the event, the weather started to turn and high winds were forecast, so I had to bring them home the evening before the storm and take pot luck.  Luckily I did because one of my bait hives at home was blown completely off the roof of my bee shed and was in pieces in front of, in, and some distance away from our compost bins, with small clusters of bees on broken combs, inside the roof and in the compost bin.  When I discovered this in the morning, I gathered up all the pieces and re-built the hive on the roof, carefully placing the rescued bees inside the brood box.  Though shocked and cold, by the afternoon they were flying as normal, so it’s highly likely the queen is safe and sound.

Talking of which, I read an interesting piece the other day about using honey bees to detect Corona-virus. Start-up company InsectSense and Wageningen Bioveterinary Research in the Netherlands have trained bees to extend their tongues when they smell the corona-virus (this has already been done using bees to detect explosives, so it’s a proven technique).  The corona-virus, like other diseases, causes metabolic changes in the body that causes a smell.  Bees can be trained within minutes to recognise the scent of samples infected with SARS-CoV-2.

Bees can detect volatiles with a sensitivity of parts per trillion.  For example, they can find a flower a few kilometres away and bees, like dogs, can learn to detect volatiles and odours with just a few minutes training.

The bees were trained to detect SARS-CoV-2 infected samples in a Pavlovian conditioning method.  Each time the bees were exposed to the scent from an infected sample, they received a sugar water solution reward.  The bees extended their tongues to collect the sugar water solution.  By repeating this action several times, the bees associated the sugar reward with the scent as the stimulus and with this repeated conditioning, soon enough bees started extending their tongues for the scent alone, with no reward offered as a follow-up.  A trained bee can detect an infected sample within a few seconds.

This research was conducted with more than 150 bees at the Biosafety laboratory of Wageningen Bioveterinary Research with different training setups to determine the most optimum training protocol.  The samples used in the first experiments were collected from healthy and SARS-CoV-2 infected minks.  In the experiments with the mink-samples, several bees indicated very good results and were able to distinguish the infected samples and those from healthy animals with very low numbers of false positives and false negatives.  Similar great results were also achieved in later experiments with human samples as well.

The next step is to work on the scalability of this approach.  Bees are globally accessible, so the only thing people need is a machine to be able to train bees.  InsectSense already has developed the prototypes of a machine that can automatically train multiple bees simultaneously and a biosensor that deploys the trained bees for diagnosis.  This technology, ‘BeeSense’, can be a very effective diagnostic system for low-income countries that face challenges in accessing infrastructure and high-tech technologies.

Let’s hope the funding continues to fruition of this amazing project.

So, back to swarming.  A leading light in the bee world said earlier this month “It’s official!  Boris Johnson has announced an extension to the swarming season”!   Whilst the source of the comment is in doubt, there is no doubt that this year the seasons have been later, at least a month compared to a “normal” year (whatever that might be!).  My experiences this month show this to be the case, so please continue to keep a look out for swarms.and get in touch with me or look on the internet at bbka.org.uk/swarm to find your nearest beekeeper by putting in your post-code.  Remember, if a swarm is not captured by a beekeeper it may end up in your chimney or your roof space and may prove impossible to remove.

Perhaps next month I’ll have something other than swarms to talk about – I hope so, anyway!