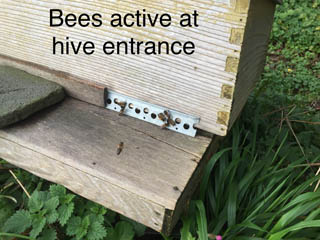 Well, it’s still raining! One wonders if it will ever stop or whether the heavens will eventually dry out. It’s fair to say that our well has plenty of water to keep us going for a while and the reservoirs are being topped up, so there is an up-side to all of this.

I don’t think the bees see it that way, though. They are staying firmly inside their hives most of the time, yet it’s so mild that once the rain stops for a few minutes they are out, flying around, looking for what, I do not know. Voiding their faeces, hopefully, as bees are so hygienic they very rarely defecate inside the hive. Instead, they will fly out and away from the hive so that they do not create vectors for disease within the colony. They will do this even on cold days and as long as they can keep flying and get back to the hive without losing too much body heat they are generally fine.

Mind you, there’s not actually any great rush for them to empty their bowels, as during the winter months the bee’s bowel can expand to occupy virtually the whole of the abdomen. There’s no point in maintaining the honey stomach inside the abdomen during winter, as there’s nothing for the bees to forage on, so it is put to more practical use. The only time the system fails is if the bees become infested with Nosema, a spore-forming protozoan that basically results in dysentery in the bees. 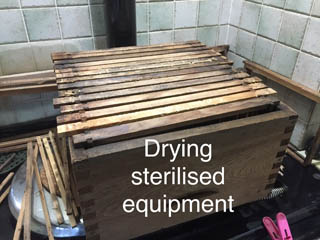 It is something that cannot be treated (other than with proprietary products that claim to resolve the issue but often don’t). Since prevention is better than cure, the answer generally is basic apiary hygiene and adequate ventilation in the hive. This is one of the advantages of open-mesh floors, as these not only off-load fallen Varroa mites but also provide the so-important ventilation. Just think for a moment.

If a group of humans was locked inside a closed room, with no ventilation or fresh-air supply, we would very quickly go down with some kind of a cold or cough as a result of being in such close proximity to others. These symptoms would rapidly spread and worsen and we’d end up with a room-full of very unwell people. It’s the same with the bees, when they are forced to stay in their hive for long periods of time by the weather, if the hive is unventilated they succumb to the pathogens that remain dormant within them for most of the time, but come to the surface once they get stressed or conditions are not favourable. Having the chance to get out of the hive from time to time is therefore of great benefit to the bees’ well-being during the winter months.

A few weeks back Lin and I went shopping – for Wellington boots! Exciting, what?! On our way home we were about to pass one of my out-apiaries, so I said I’d like to pop in and see how the bees were. As this was unplanned, I had no protective gear with me but as I wasn’t planning to do anything other than see that the bees were flying, that was fine. For the first time in ages I was now able to cross the farmyard and along the rutted, waterway of a farm track without getting a Wellington boot full of cow manure mixed with water! Luxury! 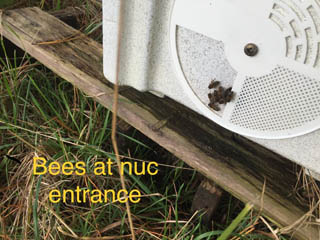 However, when I reached the hives there were no bees flying at all. I took the crown board off the first hive and saw beautiful combs in the brood box (the hive had been occupied by a swarm in the summer), with honey in them, but no bees – they had died out (I had suspected a failed queen a while back but hadn’t had time (or boots!) to check. Sadly, the other one looked as if it had died out too.

This hive had supers on it, as it had been a strong colony, so I removed the crown board to take off the supers and take them home. The first super was empty – but it was as if it was stuck down with super-glue! I couldn’t shift it. Having no hive tools or equipment with me, I therefore just held down the lower super and brood box with one hand and gave the top super a tremendous whack with my other hand – and guess what. The hive had not died out at all – it was full of bees! Not very happy bees at that by now, having had their winter cuddles disturbed rather rudely by some external predator (me!).

Do you remember the Tom and Jerry cartoons, with Tom invariably running away from angry bees which followed him in a comet-like trail, forcing him to jump into a pond and breathe through a reed poked above the surface until the bees went away? If so, you have a very good idea of the scene that day at my apiary (except I didn’t need to jump into a pond, luckily! I just had time to get the crown board back onto the lower super to keep the heat in but had to leave the hive unroofed and without its external covers whilst I beat a very hasty retreat! I stopped some distance away to see if the bees would go back inside so that I could rebuild their hive before leaving, but they didn’t. 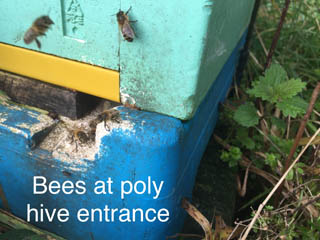 Ah well! A return visit later that day with protective gear would be necessary. When I did return later, the bees were all indoors and I was able to remove the remaining super (full of honey!) with very little trouble from the occupants – though they made it clear they would have preferred me not to have taken their last super away! However, I now had protective gear on and they and I were fine. Moral of the tale? Never go anywhere without your hive tool and bee-suit!

Do you remember last year when I told you about a lesser-spotted woodpecker making my log hive into its winter quarters? Well, walking towards my field apiary the other week, I heard the familiar “tap, tap, tap, tap, tap” that I had heard last year and I thought “here we go again – my log hive being made into a bird-box”! However, when I reached the gate and could see the log-hive, there was no sign of the woodpecker – but now I could tell where the sound was coming from – one of my other bait hives, a Langstroth brood box in a tree behind the beehives! 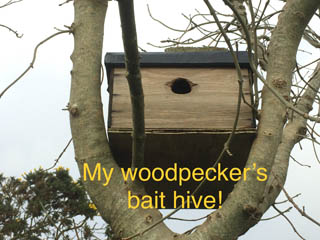 The small entrance-hole I had made for bees to use was now being enlarged by the woodpecker to use for the winter! She was hanging onto the side of the box and giving the entrance a right old hammering and continued to do so as I watched from the gate. Since the bait hives do not have a purpose during the winter months, I felt it was only right that the woodpecker be allowed to make use of the empty residence until the Spring, when I will reduce the hole again, clean out the insides and place bait comb in it. Nature is so wonderful and diverse – I love it!

What an inordinate amount of water has been descending upon us in recent months. As this is not conducive to working outdoors, as I said last month, I have been cleaning and sterilising old brood boxes and combs. This is a time-consuming activity but nonetheless very important from a hygiene point of view for the bees. Having removed all vestiges of old comb and propolis from the boxes and the frames, I then place them into our dishwasher (when I say hygiene, by the way, I am only concerned about the bees’ hygiene!!). 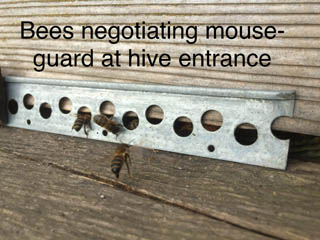 I then run this on a 70° cycle using caustic soda. To avoid wax and propolis clogging drains, I feed the dishwasher outlet into a bucket which I empty onto my compost heap twice during the wash. It works a treat, both on the woodwork and the internals of the dishwasher, giving the latter a good clear-out! Come the Spring, I should be ready to accommodate more swarms and splits and hopefully grow my over-wintered nucs into full colonies. I can hardly wait!

I hope you have a good Christmas and I’ll be back in 2020. A Happy New Year to you all.