Nearly February already as I write this! How many days until Christmas? The bees don’t care – they are working towards Spring. Every fine day, even with low temperatures, they are out and about, with some of the hives looking as if they could do with some more space! This is not how it should be. The bees should be clustered inside the hive, conserving their stores until the first Spring flowers start to bloom and it is warm enough to go and collect their pollen.

As it is, the queen is obviously laying at a faster rate than is usual for this time of year, producing brood and young bees in number. This is apparent on a sunny, warm(-ish) day as many hives have scores of bees orientating outside the hive, setting their GPS systems so that whenever they need to leave the hive they can find their way back. This augurs well for the colonies for the season ahead – if we don’t get a “Beast from the East” again. On the other hand, it could be just like our early blooming plants which, having flowered early, get cut right back by any late winter onslaught. 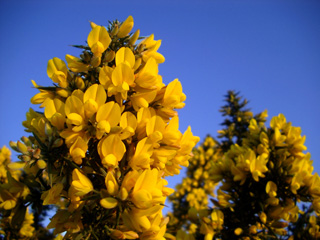 If we do get a rapid drop in temperature over several days, the bees will not be able to sustain the amount of brood in the hive and some brood will die. However, this is Nature. There’s not much we can do about it, other than hope. I have, however, thought about what I would do in such a case. If I have sufficient warning, I will bring my smaller colonies and nuclei into the garage for the duration of any exceptional cold spell, having closed off their entrances first. They will be fine, closed up for a few days indoors, and once the cold spell is over they can go back outside again and carry on as normal.

It should be a healthier environment for our bees this year as well.   MEPs have voted overwhelmingly in favour of greater pollinator protection by backing measures for further reduction in pesticide use. The problem with banning neonicotinoids is that the agricultural industry will be forced (they think!) to look for alternatives and these are not necessarily any better than those substances banned. France, for example, a year or so back, introduced the use of two new pesticides containing sulfoxaflor which are just as dangerous to pollinators in general as are the neonics. 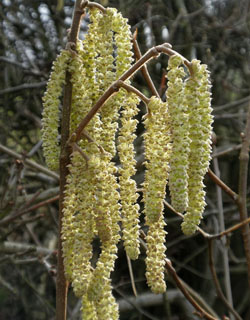 Currently, though, legal action has been brought by an environmental organisation which has succeeded in the temporary suspension of the marketing authorisation for these products. However, whilst this is good news in the short term, it will not be the end of the uphill battle we face against such chemicals. What never gets debated is the effects of these chemicals on us once the chemicals get into the soil, let alone what the effects will be on the pollinators. We must remain vigilant and not allow our food to be contaminated by the drugs companies looking for easy profits.

So what about the bees? Yes, they are out and about on the warmer days, but what are they doing? Well, apart from voiding their faeces away from the hive and collecting water to bring back to the hive to dilute their stores so that they can eat them, the bees will be keeping an eye out for any early Spring flowering plants that will provide them with pollen. Pollen is the protein part of the bees’ diet and enables the newly hatched bees to develop their glands so that they can function as intended. 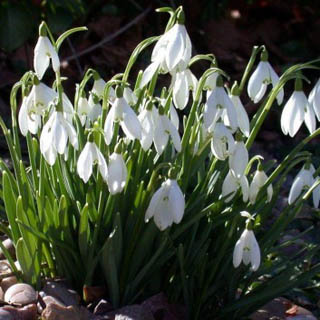 For example, the bees have glands that produce brood food (to supplement the larval diet), Royal Jelly (to feed the queen, and developing queen larvae), wax (to build their comb), enzymes (to convert nectar to honey), sting venom, and a homing pheromone that tells foraging bees which colony they should be returning to. So pollen is used by the adult bees to nourish their bodies. It’s like us eating carbohydrates and protein to maintain a balanced diet – the bees have to do the same, with their carbohydrate coming from nectar and honey.

Whilst I’m glad to say that we generally have gorse flowering all year round where we live (“when the gorse is not in bloom, kissing is out of fashion”), the bees are equally delighted because gorse provides them with very early pollen (and even a little nectar, though this is not significant). Additionally, snowdrops, crocuses and hazel catkins are equally good providers of pollen, so we can help our bees by planting these in our gardens. You can bet your life you will find honey bees nosing their way into these flowers once they are established!

I am continuing to add fondant to my hives this month, as shortly the bees will be devouring this so rapidly that I will need to replenish it at least twice or three times before the weather is consistently good enough for the bees to become “self-sufficient”. People (especially my students!) often ask why we need to feed bees. Well, we don’t always have to. 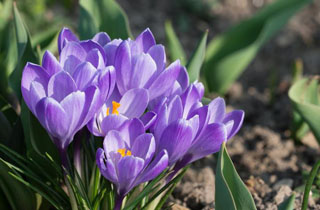 I leave enough food in the hive (their autumn honey, in the main) so that they could survive without my donations but even if the bees have plenty of stores they generally prefer to take the fondant I give them. I think it is because fondant is pure carbohydrate, whereas the honey stores they have (mainly from ivy) contain other substances that the bees cannot digest and must be voided at a time of year when they may be confined to the hive for long periods. Anyway, in my view it is an insurance policy against the bees being either short of stores or being unable to reach their stores because of cold weather, since fondant is placed directly above the cluster so that they do not have to move to reach it. 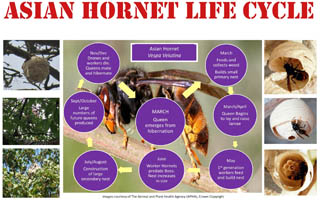 This is also the time of year when hibernating queens (wasps, bumblebees, hornets) are starting to emerge from their winter sleep. We need to keep our eyes peeled for the early signs of primary nests being built by Asian Hornets. These could be found under eaves, in a shed or in a loft area. It is imperative we prevent this exotic pest from establishing in the UK, so please do keep a look-out for these early signs and get in touch straight away so that we can eradicate the nest before it starts to get much bigger and difficult to access.

With that, I will draw to a close, in the knowledge that the month ahead will see the start of our new beekeeping season and I won’t have a minute to myself again! Can’t wait!