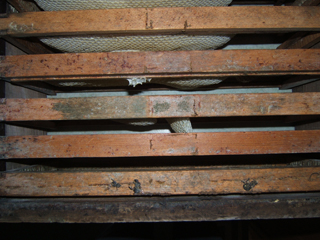 This has been an unusual winter so far (though the real winter is yet to come, I suspect). The temperatures have been so mild that the bees have been flying almost continuously and as there is very little, if anything, in the way of nectar available for them to collect, they must rely on their previously gathered winter stores to sustain themselves. This could mean that they will be running short of stores (ie honey) a lot sooner than normal.

Today, whilst some bees were flying (so they were not in their tight winter cluster), I removed the last of my autumn supers from those hives that still had them. They were all virtually empty, with just one or two having the remnants of the ivy crop they had brought home and been using since the late autumn. This suggests to me that they are needing (or wanting) to supplement their store of booty down in the brood box and judging by the number of young, orientating bees that were flying in front of the hive on Boxing Day.

The queen has not stopped laying eggs as yet, so the bees are using what would be their winter stores for feeding their young. I shall therefore be giving all my colonies some sugar candy over the feeding holes in the hive crown boards during the next few days, more as an insurance than anything else (I can’t take the brood frames out at this time of year to check if there are sufficient stores, as the bees will chill and possibly die as a result, so they’re best left alone). If the bees don’t want the candy, they will just ignore it, but if they do need it, then it could possibly be literally a lifesaver for them. 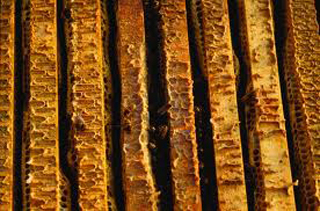 I have previously placed extra weights on the roofs of my hives to prevent the wind blowing them away and so far there have been no problems. However, some of the mouse-guards have been displaced by the wind from time to time, so I have put these back in place and hope that I spotted the problem before the mice did! Other than that, there is little else to do in the apiary at this time of year, though there is plenty to do inside.

One of my colonies had been given the customary “starter strips” during the autumn ivy flow so that they could build their own comb if they wanted to for storing nectar. This particular colony had the strips facing north to south. As I have found on occasions in such an orientation, the bees started to draw comb in line with the strips but then had tried to change its direction to more of an east-west orientation (the direction that some books say the bees prefer for their comb).

The result was therefore some combs “winding their way” across adjacent frame top bars, thus joining them together. If this was allowed to continue, the resulting hotchpotch of combs would be impossible for me to manipulate or use in a honey extractor, so one of my winter tasks will be to cut the offending comb away and re-attach it (with melted wax) in the straight orientation dictated by the strip. The bees will then continue building the comb in the spring in the proper manner and I will avoid the problems that would otherwise ensue. 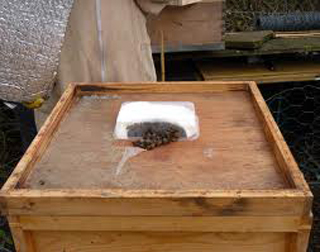 Another task that has taken up a considerable amount of my time recently has been as the result of a fellow beekeeper’s death (he was in his 80’s, so had had a reasonably good crack at the whip, with a long involvement in beekeeping – I’m aiming for the ton and trusting that beekeeping will aid me in attaining that objective!). His daughter phoned me, very worried that his bees might be starving and could I help – she didn’t know what to do. When I inspected the colonies, they were fine, with plenty of stores (good man!) and his daughter then asked me if I could find a good home for them – “her dad would have appreciated that”. Also, she said, what about all his beekeeping “stuff” – she didn’t know what it was or what to do with it (apart from dumping it).

So I ended up taking his bees away as well as identifying and removing all his beekeeping paraphernalia. My wife, Lin, always thought that I had a lot of storage for my beekeeping equipment but this beekeeper’s storage put mine in the shade! There were about six sheds or outbuildings, all of which contained varying amounts of equipment, some easily identifiable, some mixed up with DIY-type odds and sods, and it took four car-loads, packed to the gunwales, and about two whole days to remove everything (though |I’m sure there are one or two things I’ve missed because having sorted it all out at home, there are some obvious bits “missing”). 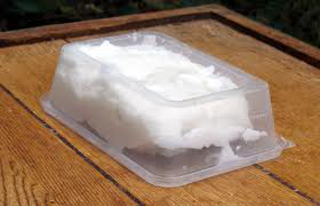 The hives with bees I was able to sell for the daughter straight away and the remaining equipment is gradually being advertised and sold, providing new beekeepers with an opportunity to acquire equipment somewhat more cheaply than they might if bought new through the trade.

So while the daughter is relieved that I have taken a burden from her shoulders, perhaps more importantly, it has been a “wake-up” call for me, as I now realise what will happen if I pop my clogs first and Lin is left with the task this beekeeper’s daughter has faced – my involvement has been an investment in the future, in the hope that someone will do the same with my bees and equipment when my turn comes, and also a reminder to try and consolidate everything into identifiable groups and areas to make the task simpler. Time will tell if I ever achieve this!