I hope you all had a great, if unseasonable weatherwise, Christmas. The bees did! They have been out and about in the spells of dry weather because it’s been so warm they think it’s Spring, some of them only now kicking out their drones, as you can see on the alighting board.

I have found three queen wasps emerged from hibernation in the bedroom so far this winter, so that’s three wasp nests less to worry about next year! Apart from that, there’s not much to report this month, other than to say I’ve removed another two supers of ivy honey from the last two hives at home. That will see my customers – and me! – right for ivy honey until next winter now. 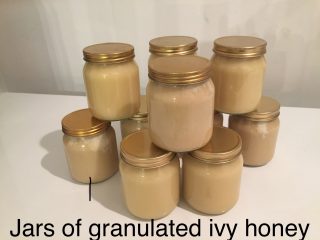 I will also be putting fondant on all hives over the next week or so, as a fall-back for the bees just in case they need it, as they are getting through their stores a lot more quickly than they usually do in winter. However, I am sure the cold weather will eventually arrive and still take us by surprise!

In anticipation of my annual demands, Lin made some honey fudge as part of her Christmas preparations this year. I thought you would be interested in her recipe, the results of which are absolutely delicious!

Grease a 7” square tin. Put the sugar, butter, milk and honey in a heavy-based saucepan and heat gently until the butter has melted and the sugar dissolved. Bring to the boil, then boil steadily to 240°F (soft ball), stirring occasionally. Remove the pan from the heat and place on a cool surface, then beat until the mixture becomes thick and creamy and it “grains”, ie until minute crystals form. Pour immediately into the tin, leaving it until it is almost cold when it should be marked into squares with a sharp knife. Once firm, it can be cut into squares.
Good luck – and I hope you don’t fudge it! 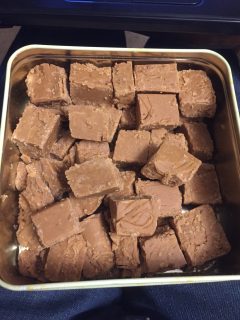 Whilst on the subject of honey, I thought you might like to know that British beekeepers are calling for a requirement on supermarkets and other retailers to label cheap honey imports, from China and other nations, with the country of origin after claims that part of the global supply is bulked out with sugar syrup.
The UK is the world’s biggest importer of Chinese honey, which can be one sixth of the price of the honey produced by bees in Britain. Supermarket own-label honey from China can be bought for as little as 69p a jar and while supermarkets say every jar of honey is “100% pure” and can be traced back to the beekeeper, there is no requirement to identify the countries of origin of honey blended from more than one country. The European Union is now considering new rules to improve consumer information for honey and ensure the country of origin is clearly identified on the jar.
Lynne Ingram, chair of the Honey Authenticity Network UK, a group of beekeepers campaigning for better information for shoppers, said the government should implement its own tough new rules to ensure better transparency.
“The consumer needs to be able to make an informed choice about what they are buying, and it’s impossible for them at the moment,” said Ingram, who is also the master beekeeper at Wesley Cottage Bees, near Bridgewater in Somerset. “The current labelling rules are hiding what people are eating.”
Sales of honey rose to a record high last year and it has overtaken jam in recent years to become the UK’s most popular spread. Consumers bought 30,000 tonnes of honey in 2020 worth £130m, according to figures from the data and research company Kantar.

About a third of the UK’s honey imports come from China, but it almost never appears on the label of supermarket jars as the country of origin. The UK also imports significant amounts of cheap honey from India, Ukraine and Vietnam.
Sainsbury’s So Organic Clear Honey (340g) costs £3.15, but the supermarket did not respond to questions on the country of origin last week. It said its honey “can be traced back to the beekeeper”. The label says the product is a “blend of non-EU honeys”.

These foreign-produced honeys are the cheapest on the supermarket shelves. While a jar of Tesco Stockwell clear honey (340g) costs just 69p, a jar of Tesco Finest English Set Honey costs £4.50. Supermarket sources said last week the Stockwell honey was a blend of honeys from China and Vietnam.

Asda said its Runny Honey (340g) costing £1.49 was also a blend of Chinese and Vietnamese honey and was “fully traceable back to the beekeeper”.
Chinese honey dominates the global market but is controversial because beekeepers in other countries say laboratory tests suggest some of the global supply is targeted by fraudsters who dilute it with cheaper sugar syrup. In China, the authorities have been warned of the threat. The Institute of Apicultural Research in Beijing stated in a research paper in March last year: “In order to seek higher profits, high-quality honey is subjected to sugar adulteration through the addition of cheaper sweeteners.” Factories in China actually advertise sugar syrup for sale to be mixed with honey, which it is claimed in marketing material can beat the most common tests used by food safety watchdogs!

There has been legal action in the United States over claims that imports of cheap adulterated honey are pushing beekeepers to financial collapse. Last year, Mitchell Weinberg, a New York-based food fraud investigator, commissioned QSI, a leading German laboratory, to test nine jars of UK supermarket own-brand honey. Eight of the nine samples tested indicated adulteration, but the Food Standards Agency (FSA) says more work is required to ensure that such tests can be relied on. It advises trading standards officers to adopt a “weight of evidence” approach in which they also consider supply chain audits and records as well as test results.

Dale Gibson, co-founder of Bermondsey Street Bees in London, which has beehives in and around the capital, including Lambeth Palace and rooftops near Tower Hill, said the FSA and trading standards officers needed to take more effective action against the threat from the food fraudsters. “They have failed to properly police the regulations,” he said.
Sian Edmunds, a partner at the legal firm Burges Salmon, provides regulatory advice on the food supply chain. She said that any new changes in European food labelling laws would not automatically apply in the UK, which would need to introduce its own regulations. Any measure to improve transparency in the food chain would be welcomed, but would need to be assessed in consultation with food firms on how easily it could be implemented. She added: “Anything that improves the authenticity and traceability of food has to be a good thing, but you have to balance it with practicality. The industry may argue that a new labelling law might be tricky for blended honey from several different countries.”

Rick Mumford, head of science, evidence and research at the FSA, said the food watchdog was working with other government bodies and industry experts to address some of the complexities around honey authenticity testing. He said: “Our work is seeking to put in place the most effective enforcement tools and guidance for detecting honey fraud so that consumers can have trust in the honey they buy.”

A government spokesperson said: “It is essential consumers have trust in the food they eat, and food labelling should be accurate and not misleading in any way. We are working with partners to understand the emerging scientific evidence on honey testing to ensure all honey can be fairly and accurately tested for contents and origin.”

So the advice is: Bee aware: do you know what is in that cheap jar of honey? There is no comparison with the real thing, bought from your local beekeeper who can tell you what chemicals (if any) are used in the hives that produced the honey and can assure you that there are no additives to corrupt the product that the bees have worked so hard to produce. Did yo know that a worker bee can only produce 1/12 of a teaspoon of honey during her entire lifetime? This partly explains why pure honey is that much more expensive than what can be found on the supermarket shelves, though I still only charge £6.50 per lb for my own honey. 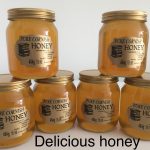 A Happy and Healthy New Year to you all and I look forward to further reporting on my bees next year.