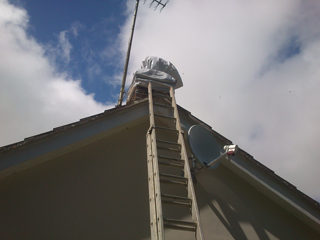 I’m pleased to report that it’s not only my bees that swarm – the past month has become somewhat manic, with telephone calls from all over Cornwall from members of the public wanting help with swarm removal. Most of them I was able to pass on to beekeepers who lived close by, but local ones I have dealt with myself. The most interesting one was a swarm that arrived from nowhere and entered a cob-built cavity wall through a small hole about an inch in diameter.

How do bees find these small openings amongst all the properties that exist in the vicinity, rather than, say, an empty beehive or a roof space? Their vision is not the same as ours and is very much based on movement rather than form, so there must be something else that explains it – perhaps the cavity had been occupied previously by bees, who, having died out, left their comb and its associated smell inside. Who knows?

Anyway, I set up a one-way valve on the hole and placed a nucleus box alongside, so that bees emerging from the cavity could not get back inside but instead were offered the chance of going into a chamber with frames and wax, where they could set up home – or they could fly off and find somewhere else to establish. As ever, they chose the former option and within 24hrs all the bees were flying in and out of the nucleus box, totally ignoring the hole with the one-way valve. 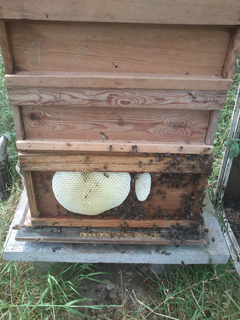 I left the hive in place and said I would check again in about a week, as I wanted to make sure I had the queen and that she had chance to mate before I moved it away. If I had moved the hive before she had finished her mating flights, she might have become dis-oriented and not been able to find her way back to the hive in a new location. A week later and there was no evidence of brood being present in the hive, as there was no pollen being collected – always a sure sign of the presence of brood.

Then, after another week, I had a phone call, saying another swarm had just arrived and settled on the hive! I thought about this for a moment and realised it was actually more likely to be a mating swarm, where the bees leave the hive when the queen goes off on one of her mating flights but return in advance of her so they can be ready to welcome her back with a pheromone signal.

Sure enough, within the hour another phone call told me the bees had all gone in and things had settled down again. I will check again this week, but I expect to see pollen going into the hive and to find eggs and larvae inside the combs. I will then remove the hive and bees and bring it home or take it to one of my out-apiaries, where it will be helped to develop into a full colony in time to bring in enough nectar and pollen to see it through the winter. 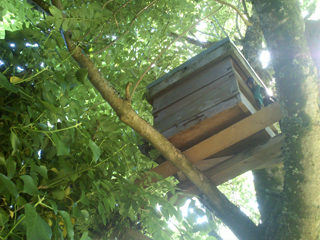 Another interesting one was a swarm in a chimney (luckily on a single storey building, so it was easy enough to access fairly safely). I was called almost as it was settling in, so there would have been no comb built yet. I therefore placed my “Swarm Box” (a fancy name for my dedicated cardboard box!) over the chimney, just lifting one edge slightly to provide an entrance/exit and left them to it.

That evening I returned at dusk and gently lifted the box upwards off the chimney, with most of the bees attached to the upper surface of the box, building comb but dangling in a long tail back into the chimney. The “tail”, unfortunately, wiped itself off onto the side-wall of the chimney – but I felt sure I had the queen, so took the box away and hived the bees the next day. Their behaviour told me that the queen was indeed there, so that was good.

I then went back to the chimney and found lots of bees flying around somewhat aimlessly, looking for their queen. I placed a flat board, within which I had mounted another one-way valve, across the top of the chimney, so that bees inside the chimney could come out but not get back. On top of this I then place an inverted cardboard box and, because of the weather forecast, covered the whole lot with a large plastic bag to keep it dry. Next day, I removed the box, board and plastic bag, took the bees to the hive where their queen was and united the two lots. 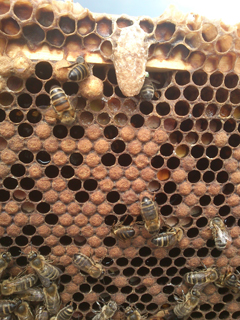 There were about a dozen bees left in the depths of the chimney but they will find their way home or enter another hive, so they will be gone in a day or two. So the end result was a saved swarm of bees, happy in their new environment and able to be treated for Varroa, ensuring their survival – and, of course, a happy member of the public.

Finally, a strange one – I noticed bees investigating one of my bait hives at home but no indication of any colony wanting to swarm. After about 4 days I saw that a swarm had arrived and was settled in. Whether it was one of mine or from elsewhere I do not yet know but that’s what the bait hives are for, I guess – to catch swarms, whether mine or anybody else’s looking for a new home.

Once I reposition the bait hive at an out-apiary (it is currently in a tree!) I will check to see if it has a marked queen, as all my queens are marked. I will then know whether I need to tighten up my beekeeping practices or that there are more bees around the neighbourhood than I realised.

So why do bees swarm? Apart from the natural instinct to propagate the species, it is often a reaction to a shortage of space – for nectar and pollen or for the queen to lay. I found one colony of mine building extra comb in the gap between the inner and outer boxes of the hive last week Luckily, I spotted it before it became a swarming issue and gave them the extra space they wanted.. 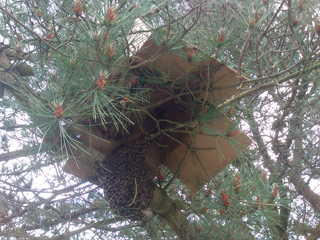 Another reason is the age or condition of the queen. If she is too old, they will often swarm, thereby allowing the amount of pheromone she produces to be sufficient for half the colony. Better still is when they realise she is getting old and plan to replace her in an orderly way by building a supercedure cell – literally just one, or maybe two – from which will emerge a virgin queen. The virgin, after mating, will start to lay whilst her mother is still present in the hive and laying, but when the bees are happy she has proved she is up to the job, they will kick out their old queen and the new one will remain the sole queen in the hive.

I had this with one of my hives last week as well – it is a desirable trait to have in one’s bees as they are the ones who know best and it is good that they are controlling their own destiny, rather than succumbing to one imposed by the beekeeper.

My other bees, meanwhile, are holding their own – there’s not a lot of honey on my colonies at home in Portloe, though those at Portscatho seem to be doing a lot better. However, since the real honey-making month is July, I shall try to be patient – last year was such a successful year all through I guess my expectations have been skewed!

Finally, it’s still swarming time, so keep your eyes peeled for swarms looking for a new home and if you let me know, I will arrange for their removal.