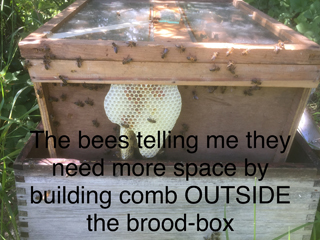 What a crazy month June has been this year! What happened to “flaming June”? Not only has it not been flaming but it has caused no end of mayhem amongst the bees who already find it a hard month anyway because of what beekeepers call “the June gap”. This is the month when the Spring flowers have finished and the Summer flowers are yet to make an appearance.

It is a time when bee colonies – which are expanding at their fastest at this time – can often starve through lack of nectar to replenish their stores. We beekeepers are aware of and are ready for this, and will check our colonies to ensure they have enough food to keep them going until the Summer flowers.

Except that this year (on the day last month that I submitted my Roseland Online BeeMania blog, in fact, so I couldn’t tell you about it), a swarm arrived at my log hive – totally unexpected and again, as with one or two other swarms, no idea from whence it came. The bees all went in and, with the honey reserves they had fed up on before leaving their old home, had enough resources to make three lovely combs. Then three days later the weather closed down, with wind and rain and cold – like mid-winter in many respects.

I should have thought about it, but didn’t. The colony perished through lack of nectar (they of course had none stored as they used up all they had to make their new home, building accommodation for the queen and the foragers. Well, I did actually think about it and was able to insert a block of candy through the base of the log hive, but unfortunately the bees could not reach it without breaking out of their cluster. If they had broken cluster and their body temperatures dropped below 7°C they would die. If they didn’t break cluster and starved – they would die! Damned if they did, damned if they didn’t! 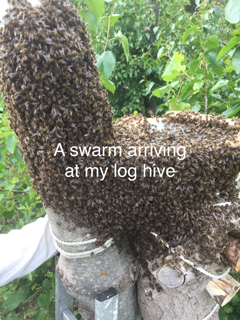 Once the weather improved a little, I was able to go out and modify the log hive to take a top feeder, which would allow the bees to feed without breaking their cluster, but though there were a few bees flying around the entrance of the hive, the queen herself had perished and so the remaining bees did too. Very sad – and I felt guilty for days afterwards for not having thought of the possibility. But who would have expected the kind of weather we have had over the past month – in June!

Once I cleaned out the hive of dead bees and had modified the roof for the feeder, I re-assembled everything, together with a swarm lure and the comb the bees had built. Within an hour or so there were inquisitive bees flying around the hive again, so I was fairly optimistic I’d get another swarm in there before Summer was out.

And I did! In fact, what happened was that, on a very windy day, I saw a lot of scout bees checking out the log hive and also another of my bait hives – so many, in fact that I was convinced a swarm would arrive in one of them imminently. Then, at about 5 o’clock, everything quietened down, so I decided to go walk-about and see what was going on – if anything! Having checked my hives and the apiary, I was on my way out when I spotted a swarm hanging quite low in a blackthorn bush. That was where the scouts had come from!

But what to do now? If I left them, they might take flight in the morning and disappear over the horizon (a friend of mine who also runs log hives had exactly this dilemma. He left the swarm hanging. It flew off!). I therefore decided to catch the swarm in my swarm box. I then put it in a large plastic bag and tied the open mouth of the bag to the opened base of the log hive. It was hot, so I covered the box with a white sheet, but I had to remove this when rain started and the wind made the air-temperature quite low. 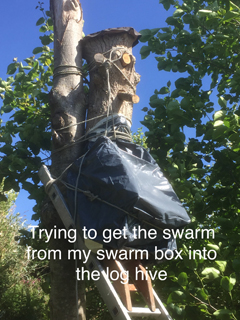 The following day, there were a few bees who had climbed through the log hive from the box below and were now flying around the entrance – but the majority of bees were still in the box! What’s the matter with these bees – I thought they were supposed to be intelligent! Get upstairs into the log hive! The next day was cold, wet and windy – and though the box felt quite empty there were no bees in the log hive and only a few flying around the entrance.

They must have gone up from the box, into the log hive – and flown off, but I didn’t want to open up the box to check because it was so cold! How ungrateful! Ah well – we always say we are not beekeepers, we are beehusbanders. We can’t make bees do what they instinctively don’t want to do and they obviously didn’t want to stay in my log hive! Sooo frustrating! Never mind. Onwards and upwards.

The following day, whilst showing some friends round our garden who had not been able to attend the Portloe Open Gardens event the previous day, Lin called to me saying the bees were making a lot of noise – and yes, she was right (there’s always a first time for everything!)! There was a swarm covering my log hive! Was it the same swarm that had refused to stay the previous day? I will never know – nor really care, as I now have a populated log hive which I can feed should the need arise and so hopefully see how they cope in their pseudo-natural hive compared with the man-made hives most beekeepers use.

Talking of which, the bees do tell us things if we care to notice. An eminent beekeeper named Storch wrote a very interesting book called “At the Hive Entrance” in which he explains how much information can be gleaned about a colony by noting what is happening at the front of the hive without the need to open it up. 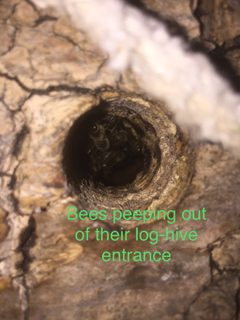 I was checking my colonies for space this month (not by opening them up but by looking through the Perspex crown-board) when I found there were a lot of bees between the outer lifts and the brood-box when I took the roof off – unusual to say the least. On removing the top two lifts I found out why – they had found they were short of space and had drawn some comb between the brood box and the lifts! There was no brood in the comb, so the queen hadn’t ventured outside the brood-box, so I was able to cut the comb away and immediately give the hive an extra super – which they occupied gladly.

Another incident occurred when Lin and I decided to go food shopping on what was a particularly wet day. We couldn’t do much in the garden and the bees were not going to swarm when it was wet, so off we went. When we arrived home, I went for my usual walk-about in the apiary – and what did I find hanging from the central pine but a very sad-looking, bedraggled swarm of bees! I collected them in my swarm box and hived them that evening and they are now somewhat drier and happier. There is a saying that “bees do nothing invariably”. This is illustrated time and again by the behaviour of bees when they do things that don’t make sense (to us!) but obviously make eminent sense to the bees.

That’s enough for this month. No reports as yet of Asian Hornet in the UK but keep your eyes peeled. Also swarming season is not yet over, so keep a look-out for any clusters hanging in bushes or trees as well. Let me know on both points or for Asian hornets contact alertnonnative@ceh.ac.uk with a photo and email.