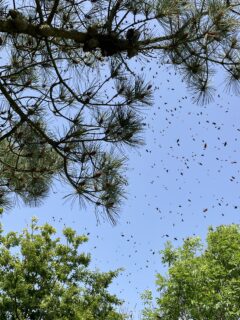 So what happened to “flaming June”?  Well, it flamed on a few days with extremely high temperatures, so high it was quite uncomfortable doing anything, let alone beekeeping in a beekeeping suit.  But then, on other days, it has been like we were in the depths of winter!

It has been very difficult to do hive inspections under these conditions, because if it is too hot the combs are virtually dripping wax and falling away from the top bars of the frames and if it is too cold then hive inspections are off the agenda completely.  I have had three instances where, whilst examining the combs (in my nucs, prior to sale), the comb has come away totally from the top bar.  This was mainly because of the softness of the wax in the extreme heat and partly due to the fact that the bees had not drawn the comb out sufficiently to attach it to the sides and bottom of the frames.  It was therefore “swinging”on the narrow length of wax attaching it to the top bar – until it fell!  The comb then had to be tied back in to the frame with elastic bands and string to allow the bees to re-attach it, which they did within 24 hours.  They are very tidy in their habits! 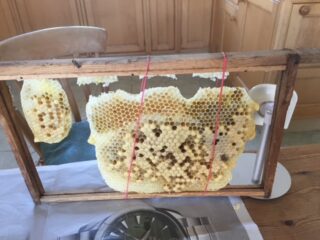 The heat has also caused the inside temperatures of some hives with large populations to become over-heated.  The result here is that some of the bees will come out and cover the front of the hive, a situation that can look as if the bees are planning to swarm. 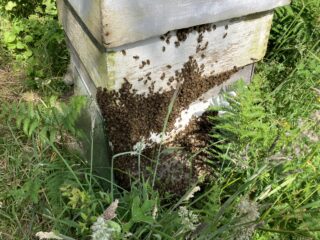 The purpose of this is two-fold.  Firstly, to allow some of the bees to cool off a little, and secondly to allow for better ventilation inside the hive in order for the bees to be able to control the temperature and humidity of the brood nest.  If this congestion is not alleviated sufficiently by the “bearding” of the bees on the front of the hive, or by the beekeeper through addition of extra space by adding another super, then the bees will be tempted to make swarming preparations, as they believe they need a bigger space to house their colony.

As you can imagine, these hot weather conditions have inevitably resulted in swarming – I’ve had two swarms from my bait hive on my friend’s shed roof and two more at home during June and all were completely different.  The first bait hive swarm I brought home and left for a few days before transferring it to a nuc hive, and, though only a relatively small swarm, it is progressing steadily.  A week later I was called to be told another swarm had arrived!  When I went to take it down from the shed roof I could barely lift it – it was a massive swarm!  I brought that home and the following day transferred all the combs (which is what they were by now, having only starter strips of foundation at the beginning!) into a full-sized hive.  They, needless to say, are going great guns.

Coming to the swarms at my home apiary, the first was a swarm that I spotted in a pine tree sheltering some of my hives (so presumably had come from one of them).  I duly retrieved my extension ladder, climbed up with my swarm box in one hand and bee-brush in the other (who needs two hands to hold onto a swaying extension ladder leaning against a slender tree branch?!), held the box under the cluster of bees and swept them off the branch into the box. 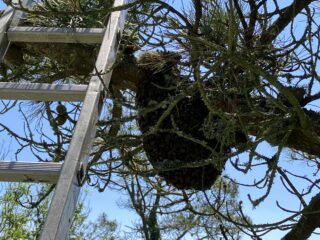 I scurried down the ladder with my box of bees and inverted it over the previously laid-out white sheet on the ground, lifted a corner with a stone and was going to leave them to it.

They appeared to be fanning their Nasanovv glands to tell any stray bees where they were, but then I saw that the bees were coming out of the box and returning to the tree branch where they had previously settled!  I had obviously (or presumably) not captured the queen, so the bees were going back to find her.  So, once they had settled, up the ladder I go and repeat the process.  This time I presumably caught the queen as well, as the bees stayed in the box this time.  That evening I laid a board covered in a white sheet (we get through a lot of sheets in our house!!) in front of the entrance to one of my poly nucs and emptied the box of bees onto the sloping board.  Most of the bees went in and just before it went dark, I closed the entrance disc to the queen excluder mode, even though there were still a few bees outside.

Doing this would not prevent the bees from absconding but if they tried they would return to the hive immediately, as the queen would not be able to get out through the excluder.  I don’t normally bother to do this but I just had that feeling…..

The following morning I went to the nuc to check all was well – not a bee in sight!  How had they gone when I had the queen excluder in place?  Then I saw the odd bee flying unde the nuc entrance to go underneath.  On further examination, I saw a cluster of bees underneath the floor of the nuc!   They had presumably not taken to the nuc hive I had given them and decided to “hang out” underneath the hive in what could be deemed a Taranov swarm. 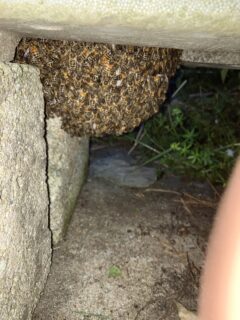 So, either the queen was a virgin who had crept out through the queen excluder to join the throng underneath or she had never been in the hive in the first place.  I grabbed an ice cream carton, scooped the bees into it from their cluster and dropped them back into the hive.  Finally, they were all in the hive – again with the queen excluder over the entrance! 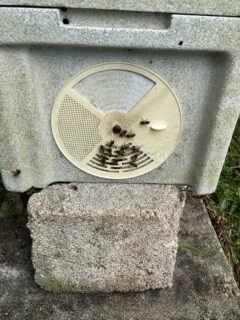 Over the next two days the bees were flying as I would have expected and were hanging on the starter strips in the hive, drawing comb in readiness for the queen to lay, so I decided I should open its entrance to allow easier access for the bees.  I then went to check another nuc alongside this one.  Just as I was finishing my inspection, I suddenly became aware of a lot of  buzzing around me.  The bees were streaming out of the poly nuc and going back to the tree!  Oh, the joys of beekeeping!   You never read about these instances in the books!

I immediately started “tanging”, an old folklore tradition in beekeeping, where the beekeeper hits a metal object (I used my hive tool against an empty feeder I had just removed from the nuc) in the belief it will encourage the bees to settle rather than fly away.  Well, settle they did and once the kerfuffle was over, up the ladder I went again with my trusty swarm box, brushed them back into the box and, having brushed them all in this time, left it inverted on the white sheet whilst I went in for some lunch.

When I returned from my lunch break, I checked the box – not a bee in sight!  They had had enough!  As had I!  It obviously was a cast or secondary swarm, whose virgin queens are quite fickle and will decamp at the slightest opportunity.  There is only so much help you can give bees and this lot had had their fair share, so on to the next swarm!

This second swarm had also decided it liked this particular tree.  It was a big swarm but I was able to repeat the capturing process and hived them that evening without any problem whatsoever. 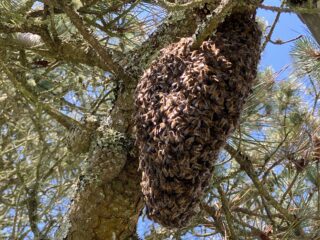 I am pleased to report that this swarm LOVED its new accommodation and has been busy ever since I hived them with no thought of going elsewhere!

So back to beekeeping!  The nuc that I had been preparing for a fellow beekeeper where I lost the queen in the grass has got itself into quite a pickle.  It made several queen cells, almost in panic judging by the randomness of them.  I think the swarm with the virgin queen that I had such problems with might have come from this colony, so I transferred the combs into a poly nuc to give them easier control over their internal conditions and put another nuc into the hive that this first lot were in.  Both hives are flying normally but initial inspections didn’t reveal evidence of a queen in either, so time will tell – next warm day.  The trouble is, we’ve had what is called the “June gap” this year, when the Spring flowers are over and there is nothing yet to replace them.  During this time of dearth, queens can go off-lay, as the bees reduce their feed in order to conserve resources.  It’s pointless letting the queen lay lots of eggs if there is not enough food to feed the hatching larvae.  Fingers crossed on this one!

As you’ve no doubt gathered, it’s still swarming season, so keep your eyes peeled.  Also, keep your eyes open for Asian Hornet nests and please report either sighting to me in the first instance, preferably by phone so that no time is lost.  Thank you.