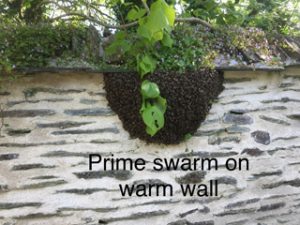 What a busy month this has been! Swarms by the bucketful – and not mine (so far!). Two chimneys, one roof, two clustered very conveniently on walls and one adopting an empty hive all by itself. I gave advice on the first three and retrieved the two clustered swarms, which are now doing very nicely in my home apiary. They were swept from their walls into my swarm box without any annoyance on their part and hived the same evening.

The first was quite a large, prime swarm i.e. with the old, original queen, which I tipped into my top-bar hive where they are drawing comb quite rapidly, as you can see in the photo I took along the inside of the TBH. 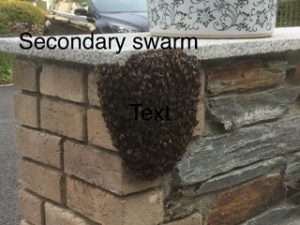 The second was a little smaller in size and turned out to be a cast, or secondary, swarm, with a virgin queen. As a precaution (because virgin queens are very fickle and can sometimes abscond from their new abode), I hived them into a poly nucleus hive and set the entrance to queen-excluder mode, so that, should the cast try to abscond, they would not be able to take the queen with them, and so would return.

After 48 hours I went to open the entrance in case the virgin wanted to come out and make her mating flight, and amazingly, as I turned the disc from queen-excluder to unrestricted open mode, the first bee out was the queen! 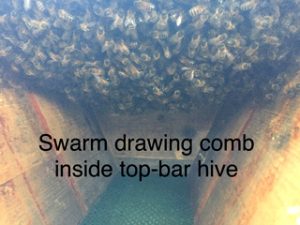 I then held my phone near the entrance and took several photos every 15 seconds or so, hoping to catch her returning – and I did! You can see her as the upper of the two bees at the entrance.

Have I told you about one of my apiaries that was wiped out from the “Beast from the East” last year? I had left the hives in place, partly through being busy and partly in the hope that a swarm might occupy them in the season. In the event, a swarm finally did arrive in one of them and is progressing very nicely. Well done girls! 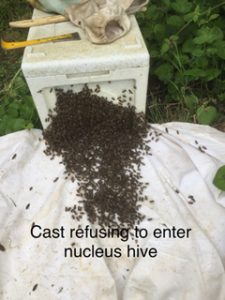 Interestingly, I was checking them last week and, having given them an extra super for their honey (which they were bringing in very nicely), went to collect one of the empty hives left there, in order to clean it and re-populate it – but there were bees flying in and out where the roof sits on the outer carcass! I gently lifted the roof (wearing no protective gear at the time!) and found that another swarm had taken up residence and attached five combs to the roof of the empty hive! Brilliant!

The easiest way to catch swarms! The next day I returned with a brood box and empty frames, planning to cut the comb from the roof and tie it into the fames.

In the event, having cut the comb away from the roof, it was so soft because of the heat that it just collapsed in my hand, so I was unable to do what I planned. 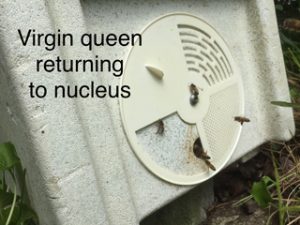 The combs contained honey, though no brood (so it was a secondary swarm with a virgin queen), so I just placed them at the end of the brood box on the floor for the bees to clean up (I resisted the temptation to take it home and eat it – the bees needed that honey to make new combs in the frames!).

I then tipped, shook or brushed the bees from the combs, the roof and the outer carcass into the brood box, where they immediately attached themselves to the starter strips at the top of the empty frames and started to draw new combs – in the right place this time! 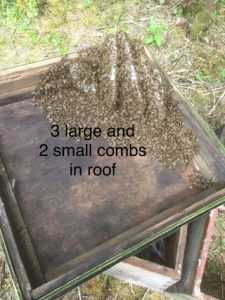 What a joy to behold! Two days later, I returned again to feed them and remove the empty combs from the floor, but they were still working on the emptying process so I just placed an Ashforth feeder on top of the brood box filled it with sugar-syrup and left them to it.

I’ll check again in about a week as the Ashforth feeder holds about a gallon of feed, so they will be fine with that until then. Point of information, Ashforth (the inventor of this particular feeder) was President of the Cornwall Beekeepers’ Association earlier last century and was a Cornishman! His innovative design allows beekeepers to feed their out-apiary hives without the need for multiple repeat visits. ‘Ansome! I have also now installed a flower-pot bait hive in a tree adjacent to the apiary – let’s see what happens there!

The hive which I split (last month’s blog) has been a bit feisty ever since, yet still bringing in lots of honey. When I took off one of the full supers last week, I found drone brood on two of the combs! There were no eggs or larvae, just sealed pupal cells. Since there was no queen in the hive at that point (remember, I had taken away a queen-right nuc previously because of the queen cups I had found, indicating possible preparations for swarming?), it could only be a laying worker that had laid those drone eggs. 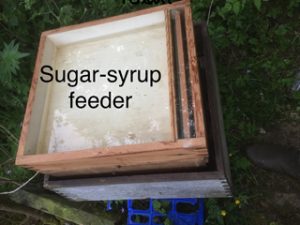 Her ovaries had kicked back into life in the absence of brood pheromones and queen substance and she had laid unfertilised drone eggs as a result. Once the new queen had emerged and there was queen pheromone back in the hive, the worker’s ovaries reverted to their dormant state and no further eggs were laid. Bees are fascinating aren’t they? But without the theoretical knowledge of how the honey bee colony functions, such a finding could have sent me on a wild-goose chase, looking for damage or distortion in the queen excluder, or a queen that had squeezed through the excluder to get into the super.

Instead, recognising the likely cause of the anomaly, I just used my uncapping fork to dig out the developing pupae, was able to do a Varroa assessment and was happy that this was a one-off down to pheromones. If you look at the photo of the drone brood, 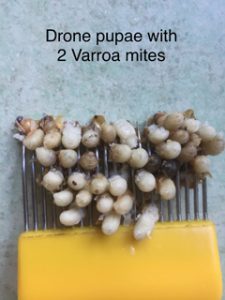 you will see two mites on the pupae – they look like little brown dots on the white pupal body. For the number of drone pupae examined, this is an acceptable mite load (to me, at any rate!).

Finally, some more good news! I have honey! It’s really thick – and delicious (I should think!!). Let’s hope this is the start of that bumper season we’ve been waiting such a long time for.

Finally finally, if you see any swarms or Asian Hornets, let me know and I’ll point you in the right direction. Otherwise, there is appropriate information in previous Roseland Online blogs if you prefer.