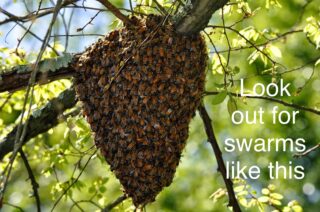 Well, it finally looks as if Spring might be on the way at last!   After having two bait hives blown to the ground at home, the bait hive being blown off my friend’s shed roof and me being blown off a ladder whilst re-instating said hive, the winds appear to have gone, the rain is no longer the incessant “wet” rain that we seem to have been having for months – and the sun is actually shining and giving us some balmy weather!  That is, until today!  I’m sticking with the “Spring is here at last” scenario, however – always positive – as the bees are going mad on our cotoneaster!

At the beginning of the month I had a call from a fellow beekeeper asking for my thoughts on a situation he had found.  His bees in one hive were not flying and when he investigated further he found hundreds of dead bees on the floor of the hive with some bees still moving but with great difficulty.  His other hive was behaving normally.  This potentially ruled out poisoning from spraying in fields or gardens, so apart from a disease vectored by Varroa it appeared to me it was starvation.  Reports are coming in from many parts of the UK of bees short of stores and being on the brink of starvation – hardly surprising when you think of the seemingly endless days of cold and wet weather May dished out to us.  I suggested spraying the bees on the combs and on the floor with a 1:1 sugar solution so that they could assimilate this immediately, following up with a feed and asked him to let me know the result.  The dilute solution would both provide the bees with immediate access to food if needed and also, if poisoning was the case, help to dilute the poison in the bees’ guts.

A week later, I noticed one of my hives was not flying, when all the others were, and also that there was a pile of dead bees outside the entrance. 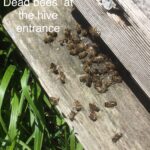 “Ah!”, I thought.  “Dead bees on the floor (normal winter losses) blocking the entrance so that, having brought out some of their dead, they were now locked inside by the remaining dead bees”.  I broke off a twig and pushed it into the entrance to scrape out any blockage.  There were dozens of them!!  This was looking serious, so I lifted the brood box and super off the hive floor (it was a strong colony) and gasped at what I saw – thousands of dead bees on the floor, with some half dead and barely moving!  I was gutted! 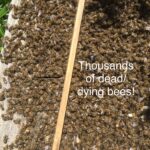 They had started to starve (there were still a lot of active bees in the hive still), just like my friend’s bees the previous week.  I cleared off the bees from the floor and put them on a flat board and sprayed them with 1:1, and after spraying the bees on the combs, I re-assembled the hive and fed them.  Within hours they were back to normal – foraging, active in the hive, bringing out the dead bees still in the combs, whilst some of the sprayed bees from the floor had taken to the air and returned to the hive.  I think I managed to save the colony by the skin of my teeth!

Another colony, meanwhile, looked as if it was planning to swarm, so I made a mental note to keep an eye on that. 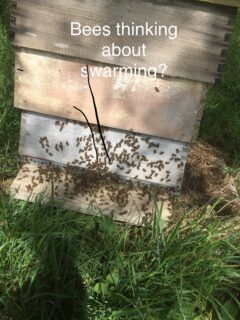 A couple of days later, I noticed the number of bees in that hive had diminished dramatically.  It had been a very prosperous colony so the contrast was quite marked.  I looked everywhere for evidence of a swarm hanging in a tree or bush or having occupied a bait hive – but found nothing!  I chalked it up to a lost colony and expected a call from the village to say there was a swarm in a chimney or loft or wherever, but again nothing.  The weather was pretty awful – wet, cold, typical May weather! – so I just shrugged it off as a loss.  Three nights later, I went to the apiary at dusk to feed the starving colony and finished off with a casual walk-about to check rooves were in place and all was in order.  Something then caught my eye and there it was – my swarm (or a swarm!) hanging in a blackthorn bush two hives away from the swarmed hive!  I approached the swarm to take a photo when suddenly several bees broke away from the cluster and flew at my head.  I quickly stepped back, but my apiary (like Cornwall!) is on a hill, so there was no ground under my retreating foot and I fell, heels over head, rolling down the slope, with my iPhone flying through the air (luckily not switched to video!).  I didn’t get stung and was able to find my phone.  But it was getting dark now, so I rushed back to the house to don my bee suit and collect my swarm box and returned to the apiary in what were by now pretty dark conditions. These bees had been hanging there for a few days now and were hungry, which was why they reacted like they did.  I gave them a quick spray of 1:1 sugar syrup to keep them going and shook them into my swarm box without any reaction whatsoever.  They obviously appreciated “coming in from the cold”. 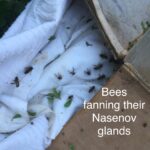 Next day, I hived them and fed them and they have been as good as gold since, still scoffing the feed I’m giving them. 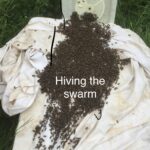 The hive they came from was virtually empty of bees so I reckoned the swarm from it had been another starvation swarm, which is basically an abscond of the whole colony.  However, the following day I noticed a lot of flying bees around the entrance to this now empty hive (bear in mind, the bees had left about four days previously, there would have been no stores or brood inside, so the bees at the entrance weren’t robbers). 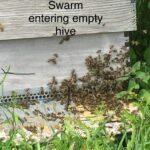 This continued all day, so it looked as if a new swarm had occupied the hive without first of all forming the traditional swarm cluster.  Don’t bees read the books?  They even ignored the other empty hive that I had set up as a bait hive, preferring this one!

Later in the day, whilst feeding those colonies that needed it and checking my apiary again, I walked into rather a lot of flying bees behind my hives – a swarm was settling higher up in another blackthorn bush! 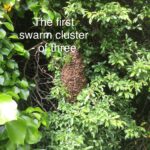 Usual routine – shook them off the bush into my swarm box and placed it on the ground on a white sheet underneath where they were gathering.  I then noticed another two small clusters just above where this one had been hanging – offshoots of the same swarm, no doubt, so I shook them down as well.  But they wouldn’t go into the box where the bees were fanning their Nasenov glands – they flew back to the branch where they had settled.  In the end, I had to cut the branches with the adhering bees and place them at the entrance to the swarm box, at which they all trooped in.

Next day, I hived them and they went in like a dream and, having been given a feed, are settling in quite nicely.. 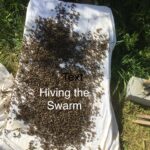 So, job done.  Hopefully things will quieten down now we have a mizzly day in contrast with the close and warm day when the bees decided that was their chance!

Well, as you might have gathered, it’s swarming time again!   So please keep an eye out for swarms and let me know if you see one so I can arrange for its removal by either myself or another beekeeper.  If we don’t capture swarms and hive them, there is the possibility they will end up in a chimney or attic, at which point it is costly and sometimes even impossible to remove them.

And don’t forget the Asian Hornet.  We’re still on alert for any new sightings.  All has been quiet so far this year but we mustn’t let our guard drop, otherwise the future of beekeeping in the UK could be in jeopardy.