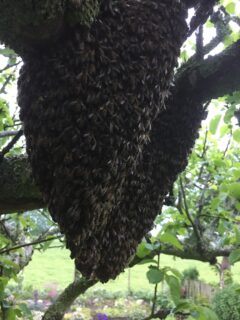 Yay!  At long last, the beekeeping season appears to have started!  Up until this past week, the weather has been so unpredictable, with sun shining but cold winds or warm weather and rain, that I have found it impossible to do anything with my bees.  However, things are starting to move at last.

I have been called out to three swarms already, one from the bait hive that I now annually place on my friend’s shed roof, one that came from a chimney colony and the third from a roof colony. 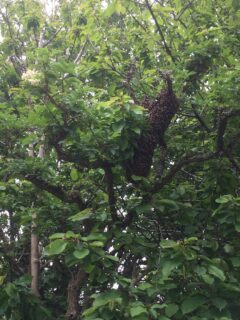 The swarm from the roof colony was (I thought) not a particularly large one, 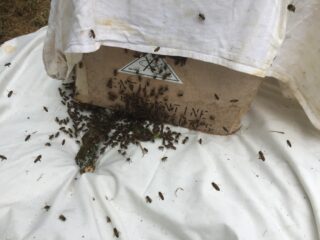 so to help them along I only placed a few frames in the hive that they were to occupy at home.  When I checked them the following week, I found, on removing the crown-board that it felt quite heavy.  Yes, you’ve guessed it!  The bees had drawn out all the frames I had given them – and decided that wasn’t enough!  They had therefore built two combs attached to the crown-board to extend their nest! 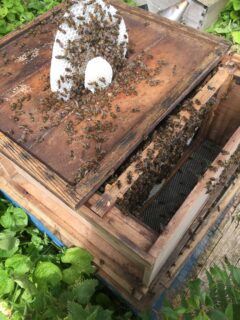 So I took the crown-board and combs back to the house, carefully cut the combs off and tied them into two empty frames. 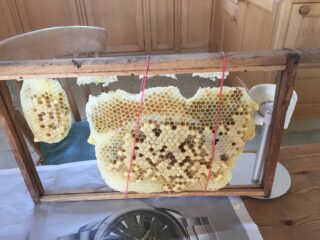 The bees are now busily extending their brood nest to fill the whole of the brood box!

Other than that, things at home have been very quiet, with no swarms so far – apart from a strange occurrence about a week ago.  I had been checking my hives in the field apiary at home and was walking back to the house along the path behind the hives, when I heard the unmistakable sound of a swarm in the air.  I looked up through the blackthorn hedge, but couldn’t see anything.  I then climbed the fence into the field behind and walked around the perimeter, checking all the hedges, but again drew a blank.  None of my hives have swarmed yet and haven’t even been making swarming preparations, so I am mystified!  My season here is a lot later than usual, with very few drones about and only small amounts of drone brood in the hives, so the bees must know something we don’t!

This hiatus in beekeeping activity though has given me the chance to prepare some nucleus colonies for sale to new beekeepers.  They have brought their empty brood boxes and nuc boxes to me and I have been able to transfer the nucs from my hives to theirs, finding the queens and marking them – though the latter has been a lot easier to say than do! With two nucs in particular, there were so many bees I could not find the queens, despite spending half a day searching.  There were eggs present, so I knew there was a queen and the behaviour of the bees indicated the same.  Then – in the first nuc, I saw her!  Scampering across the comb, a lovely black beauty!  I took out my queen cage and tried to inveigle her to enter, which she did but then rapidly turned around and came out!  I tried again.  In she went again, turned around and came out, again quite rapidly.  She then decided to jump across the comb and fell into the grass!!  Disaster!!  Could I find her?   Sadly, no, I could not, so if you ever see a beekeeper kneeling in grass and moving each blade from side to side you will know what they are doing!  Two days later there were charged queen cells on the combs, so they will re-queen and will be fine as a colony, though they will be late in the season.  At least they will be unlikely to want to swarm.

I adopted a different approach with the second nuc.  I separated the combs into pairs with gaps between each pair.  This provided a limited number of dark places for the queen to hide. Then, after about 20 minutes, I took out a comb from the first pair – no queen.  Then the second comb from that pair – again nothing.  It wasn’t until the last comb, hanging against the hive wall, that I eventually found her, again, a lovely black queen.  I guess some black queens just don’t want to be seen!  This time, keeping the comb over the open top of the hive, I successfully enticed the queen into my queen cage, took her into the house and marked her.  She is now back in her colony ready to be found a lot more easily by the new owner 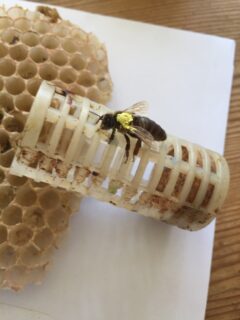 What a kerfuffle!  But it reminded me of what I tell my beekeeping students – when examining combs of brood, always hold the comb over the open top of the brood box, so that if the queen does fall off she will fall back into the hive.  Lesson learned!

My other colonies appear to be struggling at the moment.  Some of them are developing very slowly, not even covering seven or eight combs, so not ready for a super, yet others have already needed supering.  All very strange.  I guess, once the weather decides what it is going to do then the bees will also decide what they are going to do.  We’ll see!

One benefit from the colder weather though is that the Oriental hornet, Vespa orientalis, is unlikely to want to emigrate from France, where it is becoming as big a problem as the Asian Hornet, as it needs warmer climes in which to flourish. 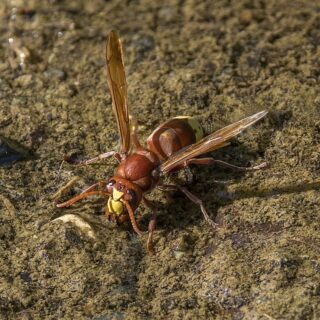 It has only recently been found in France and inhabits cavities or holes in the ground, very much like our European hornet, Vespa crabro.  Whereas the Asian hornet likes warm, damp climates, the Oriental hornet needs hot, dry conditions, so we might get away without having to cope with yet another threat to our honey bees, of which it is a voracious predator.

Finally, why is honey so cheap in the supermarkets, selling for prices like 69p for a 12oz jar, when beekeepers have to charge £7, £8 or even more for the same?  The answer is that what you are buying in the supermarket might not be pure honey but rather is adulterated honey, ie honey that has been impregnated with foreign matter to “bulk it out”.  Honey adulteration is nothing new, it’s been happening for centuries and was actually first recorded in 700BC!  However, since the days when adulteration comprised of adding things like sulphur, sand, flour and the like to honey, it has since become a very sophisticated business, using substances like high-fructose corn syrup and synthetic products that you don’t really want to know about.  It is very easy to recognise on an international scale as export volumes far outstrip actual production.   This is particularly true for Manuka honey, where production is set at 1,700 tonnes per annum.  However, the UK consumes 1,800 tonnes per annum out of a total 10,000 tonnes globally!  Do the maths!

Similarly, in some Asian countries, exports of honey are growing at a greater rate than the hive count for those countries.  China, for example, had a 888% increase in honey exports between 2000-2014 but only a 21% increase in hive count during that time.  Yet, because we don’t produce enough honey for our needs in the UK, we still import over 50, 000 tonnes (yes, tonnes!) of mainly Chinese honey every year.  Because such honey is labeled “a blend of non-EU (or EU) honey”, we have no way of telling where that jar of honey has come from.  Countries such as Spain, Italy and others always state country of origin of all the honey in blends.  We need to do that in the UK too, something that British beekeepers have been petitioning for on many occasions over the years.  Currently, the Honey Authenticity Network has been set up by British beekeepers to address the problem and has recently petitioned the Government to review the Honey Regulations to ensure honey authenticity.

In the meantime, buy local is the key phrase.  We have a rich agricultural heritage and we should be taking advantage of this by “Buying British”.  Do we really need strawberries in January, apples in February, lamb imported from the other side of the world, honey impregnated with sugar syrup?  Until the buying public become more selective and discerning in what they include in their weekly shop, nothing will change – but beekeepers are going to try to make their case.

Keep your eyes open for swarms and for Asian hornet nests.  Contact me in the first instance and I will respond, but please telephone me in either case as an email might not be read until it is too late to do anything.  Thank you.