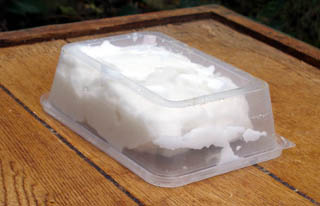 Much the same situation with the bees this month as last – flying on the warmer, calmer days, but confined to barracks most of the time. However, the sugar candy/fondant I have been placing over the hole in the crown-boards (the hive “ceiling”) is disappearing at a rapid rate of knots! Some colonies are on to their third helping, whilst one or two colonies are still making inroads into their first. This gives me a good idea as to what I will find when I finally get to the point of being able to open the hives for the first inspection.

Those who are devouring their candy rapidly will inevitably be the fittest and more active of my colonies and so their queens will be developing larger brood nests, resulting in a rapid expansion of colony numbers. These are the hives that I will have to watch carefully for swarm preparations. I have just completed teaching about swarming and how to avoid it to my class students – it can look very confusing when seen for the first time. However, it is quite simple, really. Just separate any two of the three elements brood, queen and flying bees from the third and the bees are forced into a situation that they would face if they had swarmed – lacking at least one element of the three that makes up a colony. 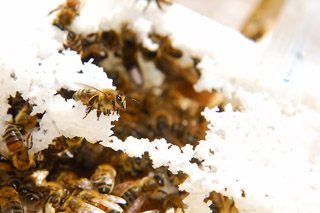 The way I generally do this, especially at out-apiaries, is to take what is called a “queen-right nuc” from the colony, normally some time in May. This is a sub-set of the colony, containing the queen, perhaps two combs of sealed brood (ie brood that is almost ready to hatch) and two combs of stores. If I intend leaving the nuc in the same apiary, I will also add some young bees to the nuc to replace the flying bees who will return home to their original location.

That way, a check is put on the original colony whilst it builds queen cells to replace the removed queen, the numbers of emerging bees from the sealed brood reduces as more and more hatch out leaving less and less brood to be cared for, and the flying bees gradually increase in number to maintain a large foraging force which continues to bring in nectar and pollen whilst waiting for their new queen to hatch. Meanwhile, the queen-right nuc develops into a full colony over the next few weeks but never gets to the size of needing to swarm. 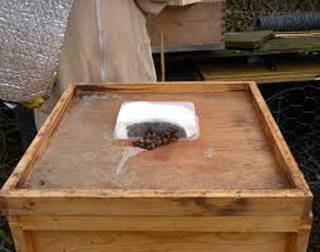 I’m not at that point yet but what I am doing is preparing my nuc boxes and frames so that when the time arrives everything is ready. I am also building a frame to receive what are called “cell punches” as part of my queen rearing programme. This will be the first time I have used cell punches so it will be interesting to see how the method compares with other methods that I will also employ. Cell punches are produced by using a cylindrical, metal punch which is placed over a cell containing an appropriately-aged larva and is pushed right through the comb.

The cylinder is removed with the cell captured at one end and a wooden dowel is inserted to push the cell with its larva to the other end of the cylinder. This is then suspended in a specially adapted frame to mimic queen cell disposition, ie with the cell in a vertical plane. The bees – in a strong, queenless colony – will then draw queen cells down around these larvae, feed them royal jelly, and are able to support anything between eight and ten queen cells for harvesting and distribution around queenless nuclei made up to receive them. Once mated, the queens can be transferred to replace older queens in existing colonies, thus maintaining the vigour of the colonies thus re-queened. I’m getting really excited about this new method of queen rearing and am totally optimistic about its likely success rate (as a beekeeper you have to be optimistic to be able to continue!). I’ll keep you posted once the process is under way.

A week ago I attended a meeting of the Bee Improvement for Cornwall group, where we discussed techniques for queen rearing and colony improvement – always a stimulating event at this time of year, filling us all with ideas and enthusiasm for the season ahead. It’s good to know there are a lot of beekeepers in Cornwall who are like-minded in wanting to re-introduce the Cornish Black Bee to the County – it’s a bit like the re-introduction of the Cornish chough and hopefully we will be as successful in our endeavours.

The week prior to that we held the Asian Hornet Day, an event that brought beekeepers and members of the public up-to-date on the ingress of this exotic pest into the UK. During the afternoon a demonstration was given as to how to make a simple monitoring device to capture the newly emerging queens and I include the instructions for those who are as worried as we beekeepers are about its inevitable arrival in Cornwall. The detailed instructions can be found at here but I include a summary with my own modifications noted.

Reports from France suggest that in areas where spring trapping has been used, subsequent numbers of Asian hornet nests are reduced by as much as 97{c8c3b3d140ed11cb7662417ff7b2dc686ffa9c2daf0848ac14f76e68f36d0c20} (2 or 3 nests in trapping areas versus >70 nests where no traps have been hung). All that is required is a couple of soft-drinks bottles, a bit of plastic coated garden wire and a 100mm square off-cut of epoxy coated wire Varroa floor mesh (though I have used greenhouse shading mesh for the one I’ve made). 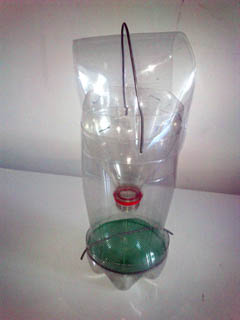 Look for bottles which have ridged sides with the bottom section marginally wider than the middle (I used a Coke bottle). Make an incision with a sharp knife and cut each side of the lower ridge with scissors – this will give a sleeve effect with the middle of the bottle free to slide into the bottom part. Then, cut around the neck of the bottle just above the bottom of the shoulder – this will make a funnel when inverted and can be fixed into place with a few staples. Cut a circle of card (again, I used a piece of coat-hanger wire for mine) which fits snugly inside the lower section of the bottle to support the mesh.

With the middle section of the bottle held firmly onto the mesh tray make a hole at each side through the overlapping layers of plastic with a small hot nail (I used a small drill bit). Push a 140mm length of garden wire right through – this will hold the two sections firmly in place. Now make two more opposite holes with a larger nail or drill bit (a 4 inch nail will give holes about 5mm diameter). Gently separate the bottle sections and twist by about 1.5 cm and push the small heated nail back through the hole in the outer bottle section so that there is now a second retaining hole in the inner section. When the holding wire is in this position the two larger holes are off-set, closing the 5mm ‘escape’ holes (to prevent smaller insects using these as alternative entrance holes). 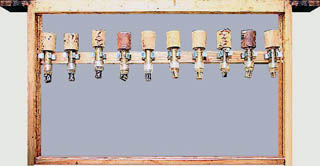 Obviously, like me, you can improvise in non-critical parts of the trap – it just needs to offer the chance of luring newly-emerged queens into the trap for monitoring, not for killing. It is important that any beneficial insect (such as the European hornet) trapped is able to be released if you are 100{c8c3b3d140ed11cb7662417ff7b2dc686ffa9c2daf0848ac14f76e68f36d0c20} sure t is not an Asian Hornet.

The best bait to use in the trap can range from a mixture of dark beer (not Guinness) and sugar (the French use this) to sweet mixtures of wine, sugar, cassis and water. You could also use the proprietary brands of hornet bait obtainable in garden centres and the like. Later in the season, once the hornets are established, a bait of protein (such as mashed prawns, cat food, etc) will attract the hornet workers themselves but really we want to stop the newly emerging queens for establishing nests, so early trap setting is crucial.

Wow! That was a long one! Sorry! Hope you don’t see any Asian Hornets but if you do give me a call – the same with swarms, though it is really a little early for these yet.