Sunshine again today!  Hooray!  We might be coming out of winter at long last, albeit very slowly.  All my hives had flying bees on the last sunny day we had before the most recent cold snap and they are all out flying (albeit in smaller numbers) again today at 10°C but there is quite a cold wind still.  Pollen is being brought in to all hives, so that generally means that there is a laying queen inside.  The pollen is needed to feed young larvae which have hatched from the eggs laid by the queen, so it is a positive sign of the well-being of the colony.  Also, when I checked the hives for food stores last week the bees were all looking very numerous at the glass-covered feed-hole in the crown-board, so I am hopeful I will have some really strong colonies in the Spring to maybe catch an early nectar flow. 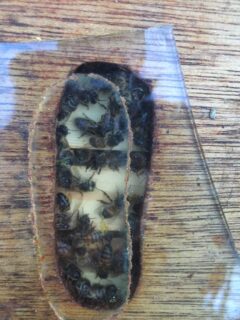 However, like chickens and eggs, I won’t depend on this until at least another month or so has passed and the blackthorn starts to flower.  I’m feeling optimistic though!

Mind you, anything can happen between now and the point at which I can relax and say “my bees have made it through the winter”.  Take one of my out-apiaries as an example.  You may remember I reported in a previous article that one of my hives had blown over and the bees were exposed to the elements, yet were still alive.  Well, it has blown over again – at least, I’m assuming it is a wind problem and not livestock getting in where they shouldn’t!!  The spot where the hives are located is quite exposed with vast stretches of open, flat countryside, over which the wind gets up quite a strength.  I don’t know how bad the situation was at the time of blowing over as I only realised on my last visit that it had happened at all.  The hive entrance had been turned through 90°, the brood box was not sitting properly on its floor, and the crown-board was not sitting properly on the brood box, so something major had happened!  I took the crown-board off and there were the bees, clustered tightly on their frames, not reacting in the least to my rude intrusion.  They were, however, “shivering” slightly.  This is not a sign that bees are cold but rather that they are on the point of starvation (which brings me back to the point of my visit – to feed them).

So knowing they were still alive, I reset the floor to its correct orientation, placed the brood box and crown-board back where they were supposed to be, and placed a block of fondant over the feed-hole, replacing the empty container that they had devoured from my previous visit.   I knew, though, that they were unlikely to be able to break cluster to get to the fondant because the weather was particularly cold (it was during the Beast from the Baltic blast we had for a week at the beginning of the month).  I had forgotten (though had intended) to bring my 1:1 sugar feed spray with me, just in case I needed it.  Now that I did need it, I had to go back home and collect it and return to spray the bees so that they had some immediately available sustenance to revive them.  Before leaving home though, I put the spray in the microwave and heated it up.  After all, how would you like to be sprayed with a cold solution in the bitter weather we were having at that time?  My bees wouldn’t like it either.  On my return to the out-apiary, I bumped into the farmer and, of course, it had been he who had found the hive askew on its base and had done his best to re-assemble it.  Its interesting how this man feels a personal responsibility for my bees on his farm and has always been most helpful and considerate.  He has always kept a watchful eye on my hives and for this I am extremely grateful.  He obviously loves the bees – almost as much as he loves the honey I give him every year!

Eventually having sprayed the clustered bees with the still warm sugar syrup solution, I replaced the crown-board and added the fondant, which I also sprayed with some warm 1:1 solution to attract the bees and make it easier for them to process.   Lets hope this will be enough to save them – at least the weather is warming up so they can get out and forage for nectar and pollen without need for my intervention.  I have also set the hive on a new base which is more robust than the previous one, so it is a lot more stable and should better be able to withstand the winds to which the apiary is exposed – or the livestock!.

As a rider to the tipped hive situation, I went back yesterday to see if they were flying, as it was a lovely sunny day with barely any wind – and they were out flying as if nothing had happened!

The fondant container over the feed-hole was full of bees eating away to their hearts’ content, so I placed another fondant block on the second feed-hole and left them to it.

These bees are obviously survivors and since, again, they took no notice of my intrusion, they are now categorised as “keepers”!

So what else have I been up to during this seemingly incessant winter of rain and wind?  Making batches of fondant every two weeks or so – the bees are guzzling it down this year!  Maintenance of hive components has been a big part of the winter activities too, though –  glueing and filling gaps in brood boxes and lifts, building framed crown-boards and new nucleus hive boxes and supers for those I already have seems to have been the main occupation, 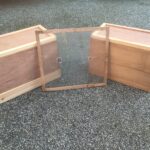 As if the derogation of thiamethoxam isn’t enough to spread gloom and despondency among beekeepers, a recent scientific study has shown that, compared with a study from1952, there have been big shifts in the wildflowers available to bees.  In the 1950s, honeybees mainly gathered nectar and pollen from white clover. 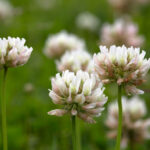 Today, unfortunately, there is not so much of this plant about and bees are having to seek alternatives in the form of oilseed rape and Himalayan balsam, and there are fears that honeybees and other vital pollinators are running out of food supplies as wildflowers disappear from our hedgerows and fields.  The study found that the agricultural systems of today don’t have enough nectar for pollinators, with much of their habitat being grasslands, which are basically a green desert.  Whilst clover is still important, it is being used a lot less than in the 1950s and is becoming more scarce.  Instead, honeybees are switching to bramble, oil-seed rape and Himalayan balsam, the latter being an invasive plant that has been spreading rapidly across the countryside and into our water courses.

The recommendations from the study research suggest providing more flower-filled hedgerows (a lot of these were wiped out as agriculture moved to bigger and bigger fields to maximimise the efficiency of the new machinery being introduced), with bramble margins and grasslands rich in wildflowers. 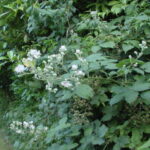 It is also suggested that changes be made to the grasslands currently dominated by a small number of grass species with few flowers to sustain pollinators.  Bringing back wildflower meadows and introducing a greater variety of nectar/pollen yielding flowers into the grasslands might go some way to alleviating the problems we are building for ourselves in our lust for “greater efficiency” in farming. 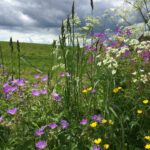 Finally, a word about the Asian Hornet.  A queen hornet has been captured on Jersey in the Channel Islands, presumably an over-wintered queen who was hoping to establish a new nest for the coming season.  This shows how imperative it is that we all make ourselves familiar with identifying this exotic pest, which has had such a devastating effect on bee-keeping in many other parts of Europe.  It is at this time of year that such over-wintered queens emerge from hibernation to start their nest building, so keep a look-out for an insect which is unusual in colouration and unlike either honey bees, wasps or European hornets. 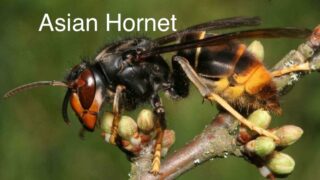 If possible, also, put out some Asian Hornet traps to capture any potential invaders and, once captured, notify myself, any other beekeeper or the Non-native Species Directorate at alertnonnative@ceh.ac.uk, or use the downloadable App on your mobile phone.