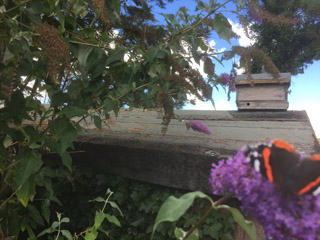 I mentioned last month about my missing pictures and video from the previous month’s blog. Well, it turns out there wasn’t room in the Newsletter for all my words and pictures. I can’t believe I talk too much!! I’ll try to keep my blogs shorter from now on.

This past month has been a month of change – cool, damp weather, followed by baking hot temperatures over the Easter weekend, then back to chill winds and cold afterwards. It’s made beekeeping quite difficult, because we need the hot weather to enable us to open hives for inspection without chilling the brood in the brood-nest.

You may remember the problem I found in my poly hive that I reported last month. Well, after the comb of brood I had swapped for the drone-laid comb had been in the hive for four days, I had to open up the hive to check that the bees hadn’t built any queen cells on larvae that were too old. The bees do this sometimes as a kind of panic reaction to not having a queen, mistakenly thinking that they will get a new queen sooner by doing so.

The queens that result from being built on older larvae, however, are inferior – what we call “scrub” queens – as they haven’t been fed on royal jelly for the whole of their time as larvae and so don’t develop properly. The day was chilly but I had no choice but to open the hive quickly, remove the comb with brood on and check. Lo! and behold! there were three queen cells, two unsealed but one (as partly expected) sealed. 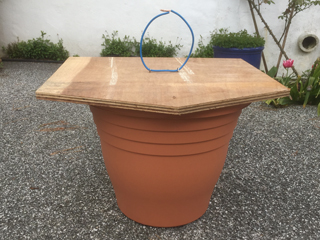 I destroyed this one, replaced the comb and closed up the hive. The next stage was to wait until just before the remaining two queen cells hatched and remove one of them to a separate nucleus hive I intended to create. If I left them both, the queens would emerge and fight each other to the death – a waste of one queen and possibly resulting in damage to the other.

As it happened, the weather was still cold but three days before the queens were due to emerge I took out the comb, placed the queen cells in queen cages which I suspended between two brood combs (where they could each continue to develop safely from the other queen) and closed up the hive. The weather continued cold and wet but four days after the queens were due to emerge I went in again, only to find one queen cell not hatched and the queen in the other queen cage emerged but dead!

What a disappointment – but, in the event, the dead queen was very small and would not have been a satisfactory one. So I retrieved another comb of brood from a prosperous hive and inserted it alongside the previously inserted comb (as there were still unhatched larvae on the comb).

Four days later, on a warmer day, I was able to re-open the hive to check for the presence of early-sealed queen cells again – but found no queen cells at all! Surprising, and indicative of the presence of a queen in the hive, though I was not expecting one. Then, on the same comb where there should have been queen cells, I saw a queen – quite small, so obviously a newly-hatched virgin. 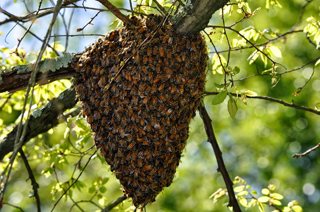 Where had she come from? Well, I can only surmise the bees had removed an egg from the first inserted comb of brood and placed it in a cell on another comb, which I had not bothered checking as I was not expecting to see any queen cells developing elsewhere. Having seen the queen, I therefore closed up the hive and left them to it.

Easter then arrived, with its glorious weather, and I went about preparing and cleaning my bait hives – a little late, but the weather and the state of my colonies told me that was fine. I found the bees’ favourite bait hive had been shelter for a bird (robin or wren, I guess) over the winter months, as there was a thick carpet of moss and dry grass over the whole of the floor.

So I cleaned that out, cleaned up the combs and frames, smeared some home-made swarm-attractant over the woodwork and re-sited the hive. I then retrieved one of my large flower-pot bait hives from my bee-shed, cleaned it, primed it and placed it in a tree about 12/15 metres from the favoured bait hive.

The following lunchtime I was doing my daily checks and saw several scout bees already sniffing around my flower-pot hive – but then heard the unmistakeable sound of a swarm! Moving to the favourite bait hive, there it was, a swarm, newly arrived and with the bees queuing to get in to their new home! That was a close call! Less than 24 hours from preparing the bait hive to the point it was occupied!

I then had to find which colony had swarmed! The obvious candidate had not! Plenty of bees, some empty queen cups, but no queen cells – and a heavy super of honey (I hope I can retrieve this, once it’s ready, before the bees take it down into their brood box!). The adjacent hive, perhaps? 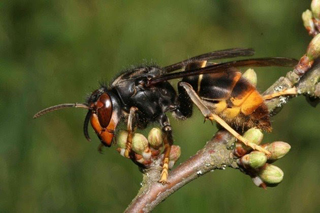 No – but they were low on stores and needed feeding to allow them to build new comb on some empty frames. Finally, one other candidate, but again not that one. Plenty of bees, so I did a split. That is, I took half the combs and bees and placed them in another brood box on a different site. I haven’t been able to get in yet to see which half had the queen, so I am trusting to luck – whichever half it was that didn’t have one – that they haven’t been too keen to raise a replacement queen cell on an older larva. We’ll see.

No sign of an after-swarm up until now (it should have emerged today if it was going to), so I am wondering (as ever!) whether the swarm that occupied my bait hive was actually from one of my colonies or was it from another beekeeper’s apiary – or better still, from a wild colony that I don’t know about! Interesting. If I find out, I’ll let you know.

As ever, keep your eyes peeled for honey bee swarms and the Asian Hornet. Contact as in previous posts.