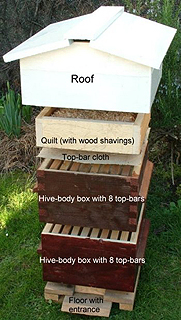 Up until last week, the weather has been mild enough and dry enough for the bees to be able to continue their quest for ivy nectar – and very successful they have been too. The flowering ivy in my garden and home apiaries has filled the air with its scent, which has then been echoed in the closer vicinity of the hives, where the bees have been evaporating off its excess moisture.. The bees are expecting a long, hard winter, methinks!

Whilst this means there is little for me to do amongst the bees – though I have been checking for sufficient storage space to ensure I can maximise the crop where this is likely – it does not mean that I am idle in regard to other bee matters! I am currently in the process of building a new type of hive (for me) known as a Warré hive. This is regaining popularity amongst the Nnatural¨ beekeeping fraternity, so with my sustainability credentials I felt it necessary to try it for myself. It is designed to simulate the bees’ nest as built in the wild, before man Ndomesticated¨ honeybees and placed them in hives which were designed for our convenience. 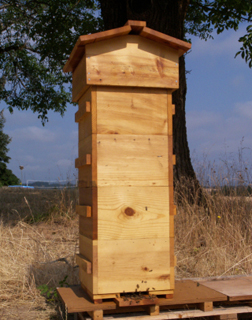 The cross-section of the Warré hive is a lot smaller than normal, being about 12N square as opposed to about 18¨ square, and as a consequence the hive needs to be taller to accommodate the natural nest the bees would build in the wild. Additionally, when bees in the wild occupy for example the dead trunk of a tree, they build their nests downwards, whereas when we give the bees more space in our British Standard hives, we force them to build upwards! This means that one of the differences in the management of Warré hives is that we must add extra space underneath the colony, rather than above as we do in our current practise.

Also, with Warré, we don’t provide the bees with wax foundation – we just give them something to which they can attach their wax combs and let them draw these naturally. There is likely to be a cost associated with all this (for a start, it takes 8lbs of honey to make 1lb of wax) so I suspect this is will be reflected in the amount of honey the bees are able to gather and store for my benefit, but if it enables them to develop a colony with (as is claimed) better control over disease and Varroa, then it will make for a healthier and stronger breed of bee – from which I can breed new queens which are likely to also have these characteristics. Anyway, it’s worth a try, and afterwards I will at least be able to speak more authoritatively on the merits of the approach. 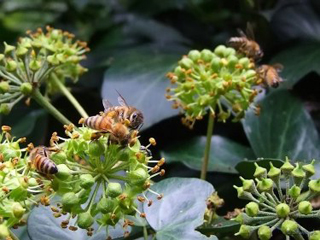 Since this has been possibly the worst season for the bees (and beekeepers!) for many a year, the media have suddenly realised there might be a story to be gleaned from this. As a result, I was interviewed on Radio Cornwall at the beginning of the month to give my views on the past season and what it means to the environment, let alone the beekeepers. This was broadcast on the day of the Callington Honey Fair, which is the only Honey Fair still celebrated in Cornwall, so was very timely. I attended the Fair in my capacity as President of the Cornwall Beekeepers’ Association and was greatly impressed by the standard of entries in all the Classes. These ranged from the Light, Medium, Dark, Granulated, Comb and Chunk Honeys, through to the Photography Section, the Art Section, the Wine Section and the Cookery Section. When the time for the Prize Giving arrived, I was privileged to announce the winners with the Portreeve (the current Chairman of the Town Council), with the Portreeve handing over the appropriate silverware. 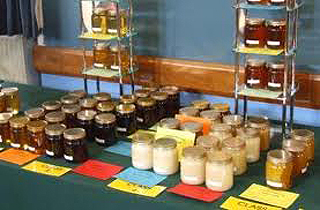 On the same day that Radio Cornwall recorded their interview, BBC Spotlight South West contacted me to record an item for their programme. I suggested the day after Callington for the recording, as the weather promised to be the best of the week (it rained all day at Callington!), to which they readily agreed. The day was one of the warmest of the month, with plenty of bee activity to and from the hives. This was a very professionally presented item, Eleanor Parkinson having done her homework before arriving and having prepared her format in detail for the piece. 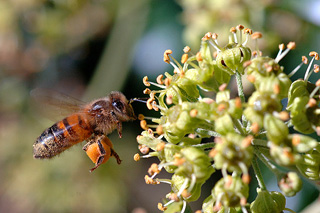 The filming was excellent, showing the bees involved in their various activities at really close quarters (I had kitted out the camera-man with a bee-suit before we started, just as a precaution, but the bees were on their best behaviour so there was no need!). This enabled me to illustrate the problems faced by beekeepers across the UK this year. All in all, excellent publicity for the plight of the bees and the planet – rounded off the following week by a half-page article in the West Briton featuring our Roseland Group Chairman. We couldn’t have obtained better coverage if we’d asked for it!

Back to more mundane matters. Last week, the weather gave us a taste of what we might be in for this winter – very cold, with chilling winds to boot! It didn’t stop the bees, though – they were all flying by late morning each day, still bringing in nectar and bright yellow ivy pollen – and the plants themselves were smelling even more strongly than ever. Ivy flows can continue into December in a favourable year, so we can but live in hope of a late honey harvest.