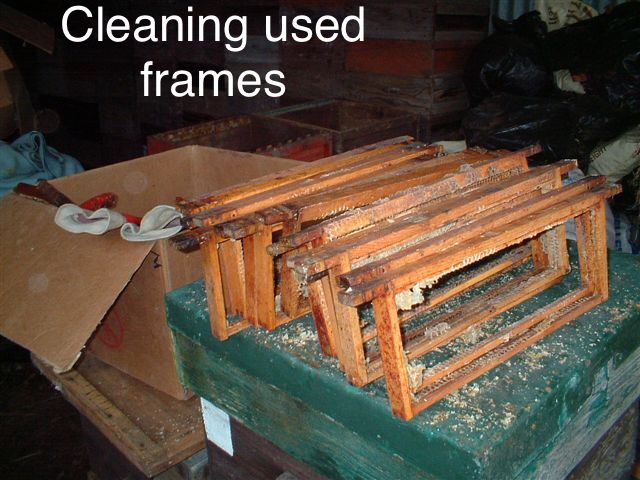 Well, the Autumn is really here now – dark at tea-time, constant rain, flooding. Or maybe we should just call it Winter and be done with it! So, as you can imagine, there’s not much beekeeping going on at the moment. What I tend to do during the winter months therefore is concentrate on cleaning used frames from the hive boxes that have been taken out of service, making them ready for the new season next Spring. A by-product of this is the wax that can be retrieved from the old combs, which I melt down and strain of cocoons and other detritus.

The resulting, cleaned wax is then made into candles or blocks, the latter being useful for those who want to make their own polish or soaps. Over the past couple of years, I have built up a small collection of moulds (which can be quite expensive to buy) and now have a Christmas/Wedding cake mould and a Christmas scene, adding to the skep and pillar candle moulds and hexagon and block moulds I already had. I gave a talk on bees to a local WI last week and sold so many wax products I am virtually out of stock! They are a very popular adjunct to my honey – which also sold well on that occasion, as ever. 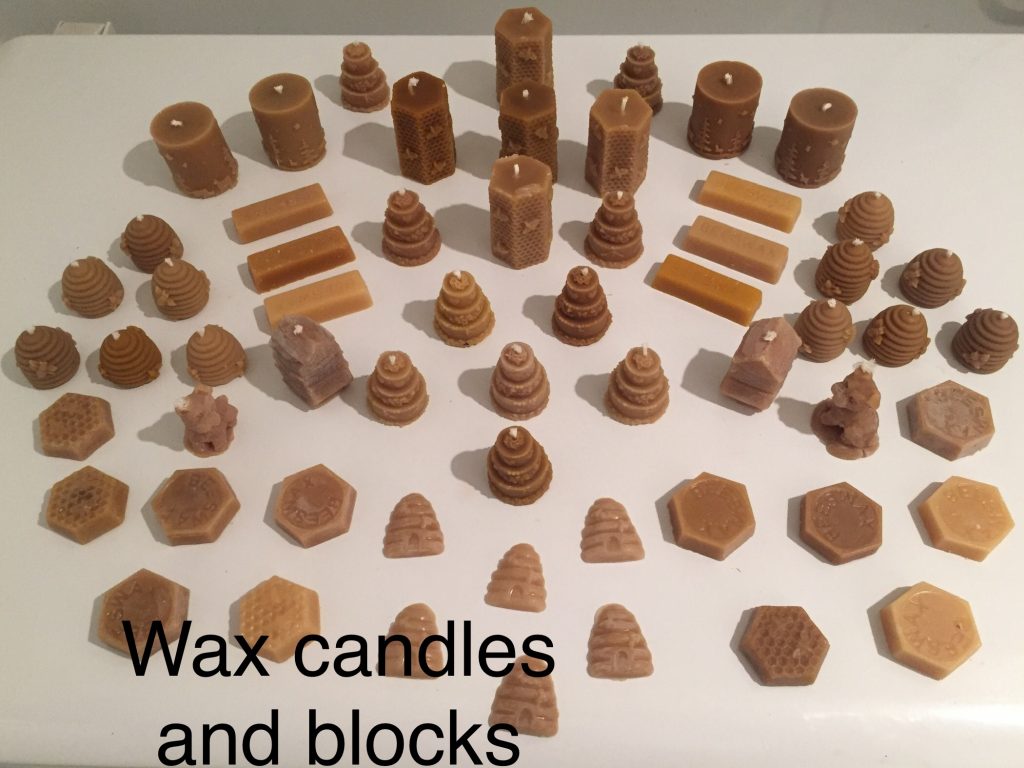 On an almost unrelated topic, an ambitious new plan for helping our bees, butterflies, hover flies and other pollinating insects has recently been launched by Buglife, University of Exeter and Cornwall Council. Called Cornwall B-Lines, this will create rivers of wildflowers across the countryside connecting the county’s best wildlife sites from coast to coast, and from our towns to the countryside. These organisations have worked with partners to map out a network of potential wildflower habitat B-Lines, and are now inviting farmers, landowners and the public to get involved in creating new pollinator habitat, and practically restoring wildflower-rich areas.

This initiative is a welcome move for the County, as bees and other pollinators are disappearing from our countryside because of a lack of wildflower-rich habitats. Three million hectares – 97% – of the UK’s wildflower-rich grasslands have been lost since the 1930s! Creating B-Lines will help wildlife move across our countryside, saving threatened species and making sure that there are plenty of pollinators out there to help us grow productive crops and pollinate wild flowers. 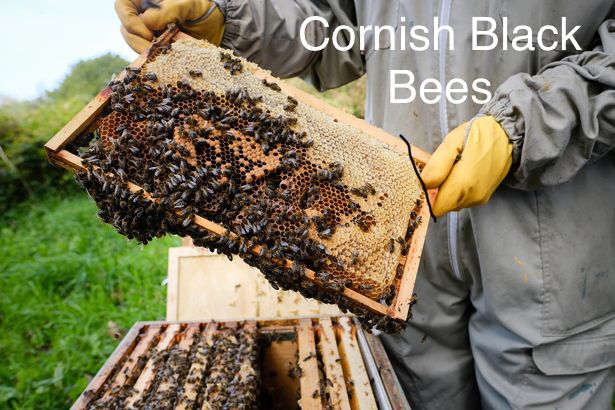 Pollinator populations are fragile and if not cared for they can become damaged, depleted and cease to function. But we now have an opportunity to turn the tide by putting wild flowers back into our Cornish countryside and towns, by creating B-Lines and putting the buzz back into both. With the B-Lines map we have the chance to make a big difference to wildlife.

If you have land which you are interested in restoring to wildflower-rich grassland, or if you would like to get involved in other ways, then do contact any of the above organisations for more information. Otherwise, just do what Lin and I have done, that is, Google it and sow your own wild-flower mix – we have sown all we can for this autumn, as the ground is now too wet to work, so we will continue either in the Spring or maybe even wait until next Autumn before completing our plan. I can’t wait to see the effect it will have on my bees adjacent to it. 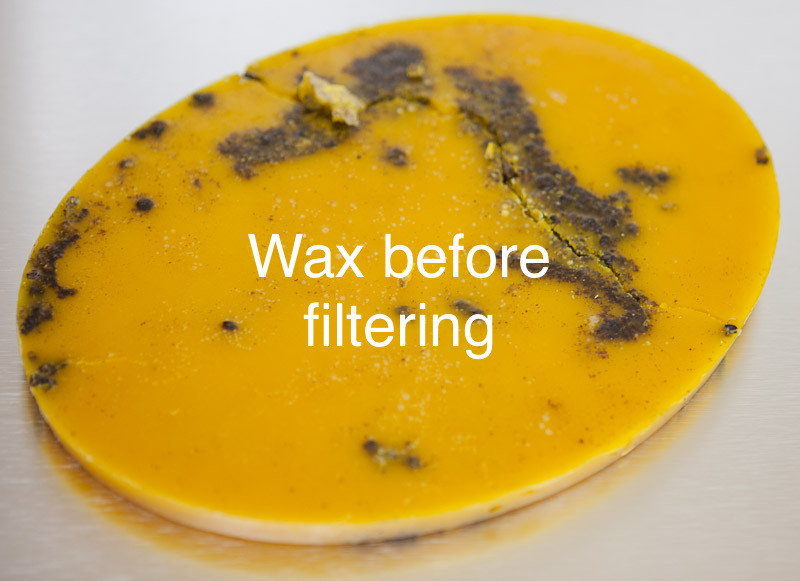 As you may recall, I am a strong advocate of the Cornish Black or Native Cornish Bee. This has now gone from near extinction to helping save the world, as the survival of the honey bee is essential to the survival of the planet. It plays a huge role in conserving the biodiversity of our countryside and food supply. The Native Cornish Bee (Apis mellifera mellifera or Amm) has fought back from near extinction to play a vital role in global research with beekeepers in Cornwall being an essential part of a huge success story.

One of the places where the Cornish bees are thriving is Godolphin House, near Helston. It is the very first National Trust property in the UK to be named as a natural haven for native bees, with 20 hives each containing 40-50,000 bees. The man behind the Godolphin project was a Flying Lizard before he was a beekeeper. Bob Black was a member of the post-punk music scene in London, working with everyone from all-female band The Slits to Madness, before moving to Cornwall, forming popular band Falmouth Soul Sensation and becoming a beekeeper. 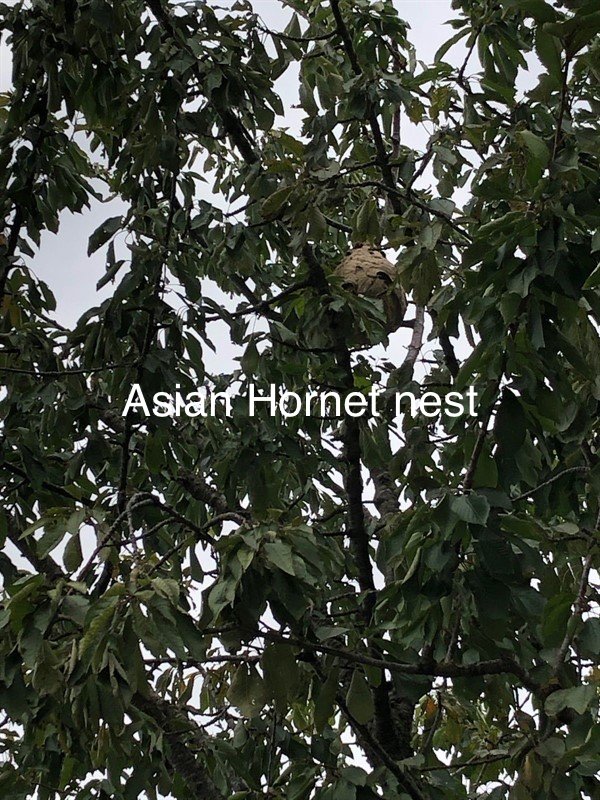 He is now a member of B4, a Community Interest Company representing beekeepers, which works to conserve, protect and increase the population of these bees. Bees are under threat, as everyone knows, and what we are hoping to do is create enough bee havens across the country so that native bees become commonplace both for beekeepers and in the wild.

This groundswell really started in Cornwall, with people like Rodger Dewhurst and Jo Widdicombe identifying the native bee in Cornwall and creating an environment where big things are happening on a national and international basis. Not only are we saving our Cornish bees on a very local basis, we are encouraging beekeepers in Cornwall to take part in our native bee programme and not import foreign bees and queens, which can be aggressive and introduce potentially fatal diseases and exotic pests. Cornwall has thus now become a centre for world research in native stocks from across the globe.

Beekeepers across the planet can maintain biodiversity by keeping their own stocks in their own native areas. That’s the perfect scenario for maintaining the health of honey bees.

In the 1920s experts were convinced that Isle of Wight Disease had wiped out all the European dark bees across the country and into Northern Europe. But twenty to thirty years ago people suddenly found little pockets of surviving native bees at sites across Cornwall including the Eden Project, Heligan, Mount Edgecombe and Paradise Park. It is these sites that have formed the foundation for the re-introduction of the Cornish Black Bee. In fact, the Eden Project has just celebrated becoming a protected native Cornish bee reserve by unveiling a new observation hive which will enable visitors to see how the fascinating creatures live.

The Great Hive Mind is a striking installation made from reclaimed scaffolding poles. It contains an observation hive which is home to a colony of around 25,000 bees expected to rise to more than 50,000 by next summer. It is situated in Eden’s Outer Estate in a field full of wild flowers above Eden’s Wild Chile area. 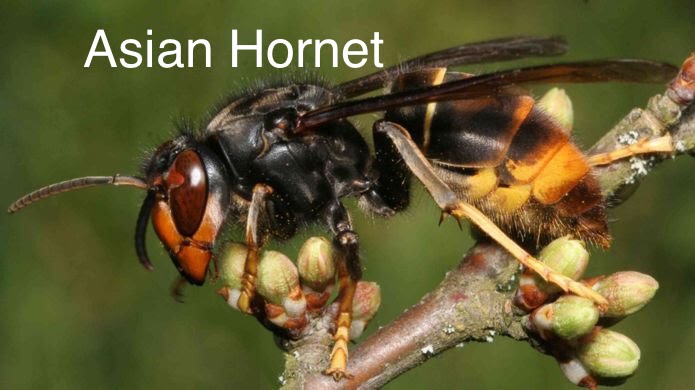 So there’s still lots going on despite the fact that the active bee-keeping season is over. I am still looking out for Asian Hornets but fortunately have drawn a blank so far. They are getting a little too close for comfort though, with the latest case being confirmed near Christchurch in Dorset on 1st October. Two nests have subsequently been destroyed, so hopefully we are still just ahead of the game. But with sightings confirmed in Ashford, Kent on 9th September, in the Tamworth area of Staffordshire on 2nd September, and earlier sightings in New Milton, Hampshire, the pest is on its way.

Since 2016, there have been a total of 17 confirmed sightings of the Asian Hornet in England, with nine nests having been destroyed. The public have played a tremendous part in spotting these incursions so I ask you again, at the risk of becoming boring, please keep your eyes skinned for nests as well as the insect itself. As the trees are now rapidly losing their leaf cover, these nests – generally at great heights – are more readily spotted, but it does mean we have to look up rather than ahead when out walking, so take care.