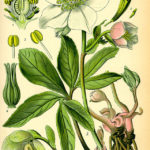 October has been a quiet month from a beekeeping point of view, with very little happening on the bee  front.  The bees are still out and about when weather permits but the ivy appears to be over so there’s not much for them to forage on apart from asters.  Unfortunately (or fortunately, really) I don’t have any Himalayan Balsam in my neighbourhood, otherwise the bees would be bringing that home in abundance.  It is a very useful crop for bees, flowering as it does at this time of year, and it’s pretty obvious if it’s in your locality as the bees return to the hive covered from head to tail in a line of white pollen that has brushed onto them as they squeeze past the anthers to get at the nectaries. 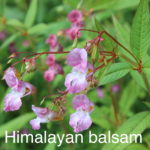 Himalayan Balsam, though, is an alien and invasive plant species and when I was given some seeds a few years back Lin made me burn them so that they didn’t get a chance to become established in our garden. They proliferate rapidly by extending their root systems and tend to be found in or near water courses – which they then end up blocking and choking because of their rapid rate of root expansion.  I guess I’ll have to be content with what the bees have already brought home and be grateful I’m not fighting an ecological battle instead. 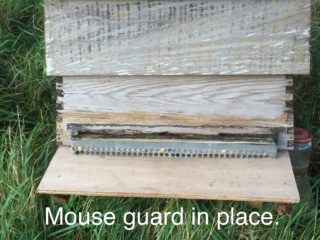 So, the guards are all installed now and the bees have got used to navigating the obstacle placed in front of their entrance – but the wasps are a little confused. 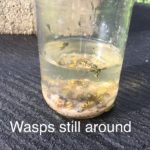 There are still the remnants of wasp colonies around (it needs to get a lot colder before they’ll be done for properly) and I’m still finding wasps in my wasp traps, so I am keeping an eye out for any persistent attacks on my smaller nucs, though at this point in the season there should not be any prolonged onslaughts possible.  What I am seeing is the occasional wasp which, in the absence of any brood of its own to feed from, is seeking a free meal from time to time from the weaker, less defensive, nuclei.

I have started to remove the supers that contain ivy honey but it’s too early yet to say how much I will have in total.  I can say, however, that it’s a lot more than last year even though the ivy flowering season was very short this year.  The supers need to be removed for two reasons.  Firstly, to harvest the honey (obvs!) but secondly, and perhaps more importantly, to prevent unnecessary heat loss from the bee cluster in the brood box.  If the supers are left on over winter then the heat generated by the cluster to keep their queen and themselves alive will move upwards in the hive, away from the cluster, into the supers and be lost from the hive.  This means the bees will have to eat more stores to make up for the lost heat, and in remaining active to do this rather than just “ticking over” they not only deplete their stores unnecessarily but shorten their winter life span.

Some beekeepers leave a full super of honey (normally “main crop” or summer honey) on the hive as food for the bees to over-winter on but all my large colonies are in jumbo or Commercial brood boxes which are large enough to hold sufficient stores for the winter without the need for this extra super.  I haven’t taken any honey from my top-bar hive or my Warré hive but will leave what’s there until the Spring, at which time I will check available space and remove what is surplus to their requirements.

Talking of the top-bar hive, when it comes to feeding emergency fondant (which I tend to give to all my hives in December or January, just as an insurance policy), the beekeeper faces a dilemma.  How do you provide food to a hive that has only top bars, which support the combs of the nest, and with no supers or crown board?  Last year, I drilled a hole in a follower board (this is a board, with the same angles as the hive sides, which forms an artificial end-wall to limit the amount of space the bees use).  I then placed a feeder on a platform in the empty part of the hive on the opposite side of the board to the colony.  The idea is that the bees, in exploring their chamber, will pass through the hole in the board, find the food, take it back into the nest area and, Hey Presto!, job done.  That is fine during the main part of the season – for example, to feed a swarm – but it is no use to a clustered colony of bees in the winter.  The ideal place for food for winter bees is immediately over the cluster, so they do not have to leave the cluster, lose their body temperature, and potentially die of cold.  However, since there is no crown board in a top-bar hive, there is no feed hole – so I made one.  In situ!  With a hive full of bees!

I needed a ¾” hole in one of the top bars to which the bees would have already attached a catenary-shaped comb that follows the contours of the hive walls.  Battery powered electric drill?  Too disruptive.  Old-fashioned hand brace drill?  Ideal.  So there am I, in the apiary, on a bee-flying day, drilling through a top-bar surrounded by bees – and the bees took no notice of me whatsoever!  It was a slow job, so not too much vibration for the bees to contend with.  I needed to be careful though, otherwise, if I was too aggressive, the drill bit, on breaking through the underside of the bar, could destroy the comb attached underneath and it would fall to the floor.  Eventually, after about five minutes of slowly turning the hand brace to keep vibrations low, I felt the drill bit break through and on retrieving it found some honey and wax on it.   I was through – and without breaking the comb off the bar!  I swiftly stopped the hole with a sherry bottle cork (where would we beekeepers be without sherry, wine and champagne?!) and can now place a block of fondant on the top bar such that the bees can access it without breaking cluster.   In fact, a few days later I removed the cork and immediately two bees poked their heads up to see what was going on – so they know the hole is there and will hopefully smell the fondant when I put it in place later in the winter. 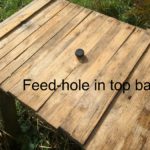 I mentioned champagne (well, Prosecco in my case!).  I cut a Prosecco cork in half from top to bottom, then pushed a nail through at the midway point, and then inserted this in the circular hive entrance of the top-bar hive as a mouse excluder (it works – I’ve done it before).  You’d be amazed at how small a hole mice (and even worse, shrews) can get through but this beekeeping hack keeps them at bay. 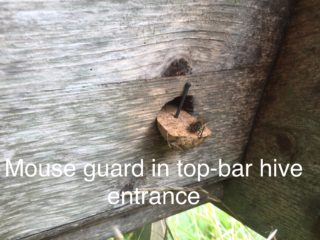 As beekeepers, we always hope that next year is going to be the year for a bumper harvest.  But with habitat loss and climate change the opposite seems to be the trend.  We can mitigate the impact of these changing conditions by making sure our gardens have plants that are bee-friendly and provide nectar and/or pollen all year round.  Amongst the myriad plants that can help us achieve this are the following, for which seeds or plants can be ordered now.  However, do avoid any hybrids or multi-floral offerings as these don’t have any facility to store nectar and, though they might look stunning in the garden, are useless to bees.

Hellebore species and hybrids.  These are tolerant of most conditions but prefer moist, well drained alkaline soil in dappled shade. Bear in mind that our soils down here tend to be acid, so you may need to add some lime when planting.

Salvia species are sun-loving plants but good drainage is essential. They look striking in a mixed border.

Echinacea is a long-flowering border perennial which is easy to grow.  It is an excellent plant for pollinators, rich in nectar through late summer and autumn.

Rudbeckia laciniata is a striking larger plant. Easy to grow.

Lavender is ideal for a mixed border, but it also makes a fantastic edging plant. Lavender really needs sun, well-drained soil and is particularly liked by bumble bees.

Galanthus nivalis Common is a delicate little flower often
covered in snow (down here?!),  but a vital source for early pollen and nectar.

Crocus species (winter-flowering) are easy to grow and look beautiful in containers or in groups on a lawn. They are an early source of pollen for the bees.

Cosmos have edible flowers. Simply scatter the seeds and these freely flowering annual plants will spring up all over. 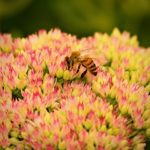 Sedums are hardy, easy to care for, make great cut flowers and are loved by bees. 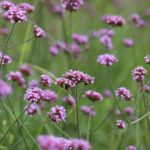 Verbena species will thrive in full sun, well drained soil and relatively dry conditions and will attract many pollinators.

So yes, there’s still plenty we can do for the bees during this lockdown era of dark nights and lowering clouds of rain – get to it!