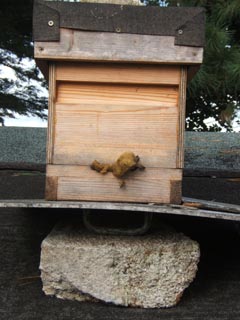 I should have known! Having said in last month’s Beeman-ia that the ivy flow could start any time soon, it actually started on the 1st September, just after my report went in! At least, it did with me. I heard, rather than saw, the fact. I went out into our kitchen garden on the Saturday morning and the air was literally “buzzing”. Not a swarm, but bees thanking Mother nature for letting the ivy produce early. Having then warned my fellow beekeepers so that they could take appropriate action, I found out that I was almost alone in having that bounty, as others said theirs was still in bud but no open flowers. Since the 1st the bees have been working the flowers for pollen and nectar every waking moment and as you walk past the hives you can smell the delicious aroma of ivy nectar being evaporated down and converted to honey. This should see them in good shape for the winter ahead and if beekeepers are feeding their bees sugar syrup at the same time, there will be a good mix of stores in the hive for the bees to over-winter on.

I also said in the last edition that I was treating my hives for Varroa (I’ve attached some pictures of the process this time). Not all of them – some were not ready in terms of still having honey supers above the brood box or being too big to confine all the bees to one brood box for the treatment, so they will have to wait. But half-way through the month I was visited by two Bee Inspectors (at my invitation, I hasten to add!) who went through every one of my hives with a fine tooth-comb, looking for signs of disease, Varroa and checking general colony condition. This will be repeated in the Spring and maybe again in the autumn of next year. This was down to the fact that my home apiaries had been randomly selected to partake in a European Union Pathogen Survey Project. 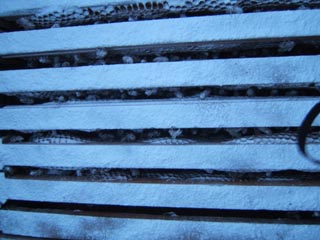 This is a survey of hundreds of randomly selected apiaries across the whole of Europe to check their colonies’ pathogen loadings and monitor their progress over the next winter and summer seasons. The three of us (and with twenty colonies it took the three of us!) spent all day taking each hive down to the brood box, removing each of the combs and checking it for signs of disease, dying or deformed bees, and dying or deformed brood. Signs of Varroa were found in several hives, which is what I would expect, as I don’t want the bees to become totally reliant upon my actions to save them from the effects of Varroa so manage the situation in a way that helps the bees to help themselves (ie encouraging self-grooming, and therefore removal of mites, through the use of icing sugar dusting and the like). However, in the hives that I had already treated with the icing sugar dusting process, there were no signs of Varroa, either in the bees or in the brood – vindication, perhaps of my non-chemical approach to the problem. So, more of the same, as far as I’m concerned. 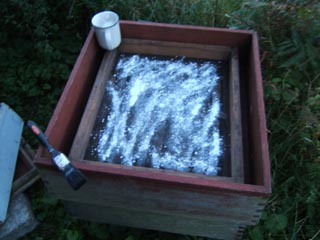 Just after this visit, the West Cornwall Beekeepers’ Association and the Cornwall Beekeepers’ Association held their annual joint conference day entitled “A Bit of a Do”. We had as guest speaker the Chair of the British Beekeepers’ Association, Dr David Aston, who gave two very enlightening presentations, the first on “Plants and Honeybees”, the second on “Proteins and Honeybees”. It’s always interesting to hear outside speakers who are qualified in fields (in David’s case, botany) other than (or as well as) beekeeping and David was one of those. Coupled with a choice of any two out of three workshops, it made for a very stimulating day, of which I was proud to be a part as one member of the “Questions and Answers” panel alongside David and his wife, Dr Sally Bucknell (also a highly qualified botanist like David) and Rodger Dewhurst from WCBKA at the end of the afternoon. By the end we were all “bee”ed out and glad to get home and rest our brains! 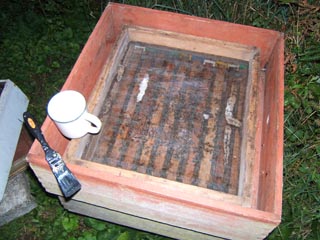 So back to the mini-nucs that I have developed during the “summer”. The one that I was uniting on my bee shed roof has now united, the mini-nuc portion has been removed, and the colony is building up very nicely. It did suffer from some robbing early on (weak/small colonies such as nucs are always susceptible to robbing, so I was keeping an eye out) but I resolved that by closing up the hive for a couple of days and then restricting the entrance to one bee-width entrance. Closing the hive told the robbers that there was no longer anything on offer, so most of them went away and carried on with their normal business. The restricted entrance made it a lot easier for the resident bees to defend their home and prevent strangers from entering the hive. Whilst quite a few bees were killed in the initial battles that took place, things have calmed down now and the colony is again building up.

Another mini-nuc was taken to one of my out-apiaries and united with a colony which had an old, failing queen. I knew this was the case as the queen was laying multiple eggs in each cell, something that a healthy, young queen would not do. I therefore removed her (and killed her – sorry!) before placing the mini-nuc on top of the box with a sheet of newspaper between the two. The bees in the upper box chew through the paper so they can get out to forage and in the early stages of chewing the holes they start to share their pheromones (scents) so by the time the bees can get through and make contact with one another, they all smell the same and think they belong to the same hive. Clever, eh?

As to what’s next, it depends on the weather. If the ivy flow continues for a while, there is nothing to do other than ensure there is enough space for the bees to store their harvest. I will treat any other hives that I can for Varroa and prepare my grease patties for the winter treatments (another Varroa control method I use which is a “natural” control method). So you see, the honeybee season is not over yet!