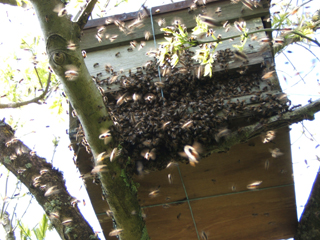 It has been a disappointing beekeeping season across the whole of the UK this year. Many beekeepers have harvested no honey at all, others have been feeding their bees to get them through the tight times, and mating has not been as successful in many instances as one would like. The problem has been the cold winds we’ve experienced this year, as well as the mild winter during which the bees ate most of their stores early on. This meant that colonies which had been rearing brood early, apart from virtually running out of stores, also grew in size more rapidly than usual and swarmed, or at least made swarming preparations. This entailed a lot more work for the beekeeper, either in catching the swarm, in hiving a caught swarm or in terms of manipulating a colony which was making preparations to swarm. 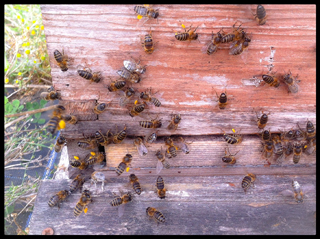 There has always been in beekeeping lore the Holy Grail of the “non-swarming” bee – “just think how easy beekeeping would be if bees didn’t swarm”! However, swarming is an instinctive response by bees to the need to propagate their species, so a non-swarming species would very quickly die out. We need bees to want to swarm, but we want them to do it sensibly, that is, not to make 20 or 30 swarm (new queen) cells but, say, anything up to half a dozen. Breeding from this type of bee makes their management a lot more straightforward and makes life easier for the beekeeper (ideally, a colony that supercedes its queen would be even better!). Additionally, there are the neighbours to think of and those for whom the sight of a swarm of bees in flight is terrifying, so we need to manage our stocks in exactly the same way that farmers manage their stocks, that is, understand their needs and accommodate those needs, which, in beekeeping terms means circumventing the swarming process in a way which allows the bees to think they’ve swarmed without having the inconvenience that results from them actually doing so. 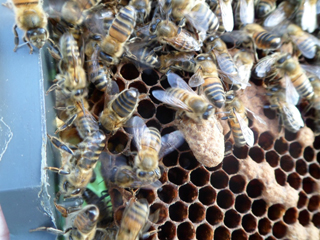 There is the story of the beekeeper who asked the Bee Inspector to help her harvest her honey from the hive late one summer. Though this is not what Bee Inspectors are for, this particular Inspector, who lived locally, was very accommodating and duly turned up to help the beekeeper. On removing the roof from the hive, there, on the crown board (the hive “ceiling”, as it were), was an array of un-lidded honey jars – all empty, of course – into which the beekeeper had expected the bees to place their honey!

This is an extreme example of a beekeeper not understanding the needs of the bees. But such a situation is easily remedied through education and I have just started the first of two of my winter courses, which currently (there are always last minute attendees) have 22 students enrolled. This augers well for beekeeping, as most attendees are committed even before the course and carry on to become fully-fledged beekeepers. So when people say to me “ I understand the bees are in trouble”, I can say that here in Cornwall we are very lucky a) to have this constant influx of new beekeepers, b) to have the amount of bee-suitable forage in our county that we have (trees, hedgerows, wild flowers, etc), c) not an excessive amount of the landscape devoted to rapeseed.(which is becoming less cost-effective to produce now anyway), d) minimal insecticide problems compared with other parts of the UK, e) a climate (generally, and ignoring global warming) that is conducive to beekeeping and f) a thriving beekeeping community to support newcomers and established beekeepers alike. 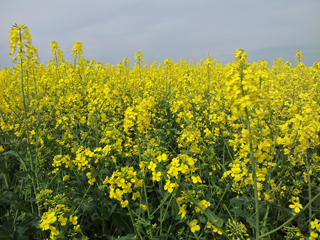 If you then look at other parts of the UK, particularly the east coast, then that is where many of the problematic situations arise – an excess of land devoted to monoculture (eg rape), a dependence on crop spraying, a dearth of early blooming plants (we have gorse virtually throughout the year down here, which provides early nectar for bees but mainly pollen, which is what they generally have dire need for) and a far colder climate than we have down here. So yes, whilst we are very fortunate here in Cornwall, the bees actually are in trouble, through loss of habitat, inappropriate insecticide use, climate change, etc and we need more beekeepers to help mitigate these problems.

Things are not helped by the government allowing selected reintroduction of neonicotinoids in parts of the UK when the use of these insecticides is supposed to be under a moratorium until December. Do they not realise that once the bees are gone that’s it – they’re gone! They can’t be “magic”ed back into existence. So until we have firm evidence one way or the other on the effect of neonics on our bees (and on us, by the way, because neonics stay in the soil for up to 8 years, contaminate our water courses, our seas, and therefore the rain that falls on us and our land), should the government not be adopting the “precautionary principle” that says, until we have firm evidence that these insecticides are safe, we’ll not use them? Neonicotinoids, amongst other things, damage the memory of foraging insects (not just honeybees), thereby preventing them from finding their way home from the fields, thus depleting colony sizes and pollination capability. Have you ever wondered why Alzheimer’s disease has become so rife amongst we humans in the past few years?

Sorry! I did not start this blog with the intention of soap-boxing but that’s the way it’s gone, so I’ll stop here, with apologies. 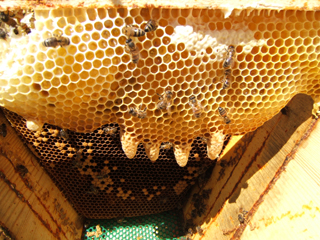 What am I doing now as a beekeeper coming to the end of another season? Well, the ivy has been flowering since early September, though it was slow to get going because of the cold and the dry (yes, hard to believe, isn’t it, the ground has been too dry!). This means the bees are getting themselves set up for the winter. I have fed just two of my colonies this autumn, because they were too small to provide sufficient foragers to keep themselves going, and I have three queenless colonies which are dying out and will be gone within the month. Queen mating was poor this year, resulting in rejected queens or those who became drone-layers. Hopefully (beekeepers are ever hopeful!), next year will be better and I can get back to more successful queen rearing. In the meantime, it’s a question of bringing in hives in which the bees have died out, repairing equipment and battening down the hatches to make sure the hives can withstand whatever nature might throw at them during the next few months. I also might be able to take an excess ivy crop but time alone will tell. Being an optimist, I am sure I’ll be able to – I’ll let you know!