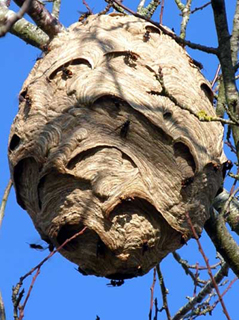 You may recall that in a previous report I told you about an Asian Hornet’s nest spotted in Tetbury, Gloucestershire last September. This nest was killed and the contents analysed to try to ascertain whether or not any virgin queens had left to mate and hibernate over the winter. After an extensive search, no other nests were found and we were hopeful that the occurrence was a one-off. Unfortunately, a very worrying development has occurred in the past week – another Asian Hornet’s nest has been found, this time near Woolacombe in Devon. Whilst this nest has also now been killed and is being analysed for potential virgin queens by the National Bee Unit, it is all getting a little too close for comfort! The search is now on again, as in Tetbury, for ‘satellite’ nests in the immediate area.

However, an even more worrying fact is that a beekeeper in the Plymouth area, in fact the Apiary Manager of the Plymouth Beekeepers’ Association, believed he saw what is described as ‘hawking’ by a hornet in front of one of his hives at his home apiary. He saw the hornet take one of his returning bees and killing it. This has been confirmed as another sighting of the Asian Hornet, so the threat is moving ever closer. 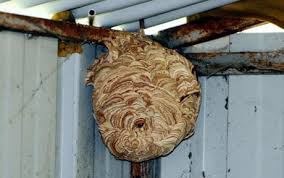 I shall therefore take this opportunity to ask you all again to keep your eyes peeled for their nests, which they often build high up in coniferous trees. The nests are difficult to spot because they are so high up and because of the dense tree canopy in which they are built but it is still possible to see them if one looks really carefully, especially if there are insects seen flying in and out along a path into wooded areas. The nests are also sometimes built in man-made structures, for example barns and the like. The hornet hunts honey bees, other insects and also feeds on fruit and flowers, though at this time of year they mainly require protein-rich food, which is why they are such a threat to honey bees. 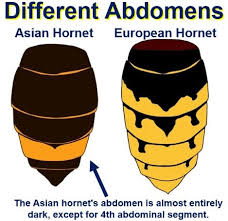 The Asian Hornet has a dark brown or black velvety body, an orange face, a dark abdomen with a single, thin, orange band (our indigenous European Hornet is mainly yellow, just like a wasp) and yellow-tipped legs. It is smaller than our native hornet and poses no greater risk to human health than a bee but, as I said, it does pose a huge risk to our honey bees. 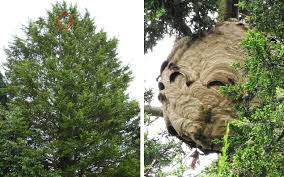 Finally, if you do think you’ve seen a nest or an Asian Hornet, it can be reported to www.nonnativespecies.org or to the National Bee Unit at www.nationalbeeunit.com whilst letting me know would also be appreciated so that I can tell our local beekeepers in Cornwall.

Back to beekeeping! It has been a busy month finishing the removal of honey supers from the hives but whilst I said last month that I did have a honey crop, I regret to say it has been less than last year – and that was a bad year! Never mind.. The bees are currently going crazy over ivy – you can smell the ivy honey at the hive entrance in the evenings when the bees are evaporating off the excess water and it is an experience to savour. 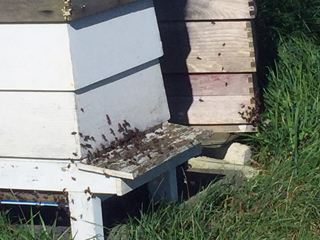 A lot of beekeepers, though, find ivy abhorrent as it sets like concrete in the hive over Winter and clogs up the brood nest in the Spring. However, with proper management this is no big deal as long as you provide water for the bees so that they can dissolve the “concrete” when they need it and as long as you remove combs in the Spring if they are preventing the bees from expanding their nest. The full combs you remove can be fed back to the bees later in the Spring when the bees are more numerous and can utilise it more readily. After all, the bees have been gathering ivy nectar as their winter stores for millennia, so they have sorted out ways of handing it by now, otherwise they would have died out. 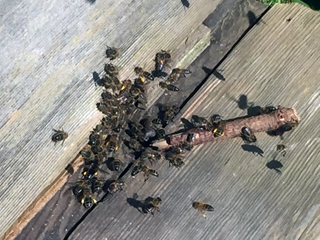 Talking of which, I have lost another two colonies through queen failure. This is par for the course in beekeeping and really I reached the point many years ago where I gave up worrying about and molly-coddling failing or weak colonies, adopting Darwin’s philosophy of “survival of the fittest”. If they can’t hack it then there’s no place for them in my apiaries. I have very many strong and healthy colonies which can hack it and I concentrate my efforts on those. Remember, I said last time, honey is not my primary objective – it is the multiplying of the number of healthy bees in the environment that is my aim and to that end I am achieving my goal. 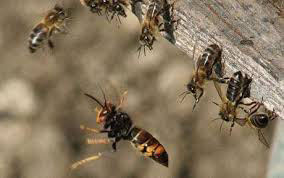 I had a call this week from Newquay Zoo – they had a honey bee swarm! I was able to pass that on to a beekeeper who lives somewhat nearer to Newquay than I do, resulting in one happy beekeeper, one happy Zoo! So it is still not too late for swarms because the mild weather has allowed the queens to continue laying more than they normally would, perhaps, at this time of year, so in addition to looking out for Asian Hornet nests, please keep your eyes peeled for late swarms and let me know if you see any – a nearby beekeeper will be contacted to collect them.

Finally, my autumn courses for people wanting to become beekeepers have started at Probus, with13 students on my Monday course and 10 on my Saturday course. This is a good sign for the season ahead and helps us to maintain a younger and growing membership in the Cornwall Beekeeping Association. Onwards and upwards!