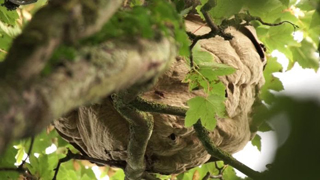 Home again after three weeks looking after our two granddaughters, 6 and 10 years of age. We’re exhausted, as the younger one is like an Exocet missile – doing everything at top speed and for very many hours each day! But immediately on our return I went to check my bees and they were still working their socks off, bringing in nectar and pollen like there’s no tomorrow. Well, really, there is no tomorrow in terms of a guarantee that there will be forage available for them or that the weather will allow them out to retrieve it!

It is vital that the bees stock up on available nectar and pollen during September and October so that they have enough stores to last them through the winter, when there will be few plants flowering to provide them with food and the weather might prevent them from flying anyway. The pollen is eaten by the adult bees so that they can build up their fat-bodies. This enables them, apart from the reduced need for foraging and feeding their young during the winter months, to live a lot longer than they normally would. Bees live for about 6 weeks in the season, which is why the queen needs to be able to lay up to 2,000 eggs a day – this allows a colony to expand as well as merely replacing end-of-life bees. 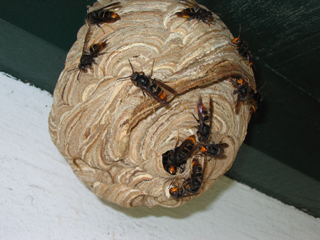 During the winter months, however, when the bees are likely to be clustering together to keep warm and to keep their queen alive, the bees can live for up to 6 months, assuming they are well-provisioned and have had chance to build up their fat-bodies. The queen needs to be kept at a temperature of 200C if there is no brood present, or 350C if there is – that takes a lot of energy (provided by the honey), so any colony short on honey stores will either die from starvation or lose the queen because they cannot keep her warm. The pollen the bees have eaten changes their metabolism so that their glands do not age as they normally would and allows them to live longer.

The pollen and nectar the bees are collecting at the moment is from ivy, which is now flowering, though in many instances is actually over, so I obviously missed the start of that. Ivy is unpopular with some beekeepers because the honey made from its nectar granulates very quickly in the comb and sets to a rock-hard consistency. The bees, however, have been gathering this every autumn for millennia and they have obviously found a way of managing to use it. 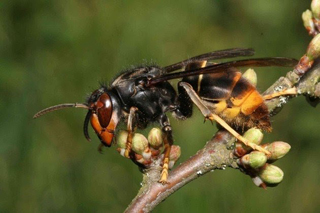 They basically uncap the cell containing the solid honey and add their saliva to it. If there is water available, say from condensation on the inner walls of the hive and they can get to it, they will utilise this. I have hefted (ie checked the heaviness) of my hives which feel as if they are nailed down! This is a good indication that the bees are well-provisioned for the winter already, so it might be that I will get a small surplus crop of ivy honey for those of my customers who love it as much as I do. Time will tell. I don’t take anything away until about December, once the bees have started clustering, as they might want to move any surplus down to their brood box. I can wait!

When I had the opportunity, I spent time in my apiary watching the hives and watching the bees flying in and out with their booty. Fortunately, I did not see any signs of Asian Hornet hawking and capturing returning bees. The Fowey sighting, fortunately, has now been resolved with the finding of a primary nest at waist height, followed up by the discovery of the main nest in a tall tree nearby.

Apparently, the Asian Hornet queen will build this low-level nest to kick-start the colony in the early part of the year, then move upward to a tall tree to build another nest, which becomes the main nest. However, the primary nest is still used, though I do not know what for, as the queen can only be in one place at any given time. It’s a useful pointer for us that they are present, though, as it’s much easier to spot than the main nest high above our heads. Let’s hope that these solitary sightings in Fowey, Liskeard and Bury, having been dealt with by insecticide spraying and destruction, are the end of the current Asian Hornet incursion. The bees are having a difficult enough time as it is. 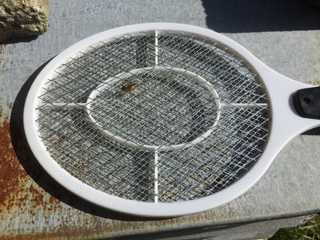 Whilst watching my bees flying in and out of their hives, though, I did see a lot of wasps trying to get past the colony guards to get inside the hives to steal honey. Some were successful (though not those who succumbed to my tennis racquet!!) and this poses a problem, as once inside the hive these wasps can acquire the odour of the hive, so that next time they arrive at the entrance the guards will sniff them, recognise the hive odour – and let them in, when they will steal more honey or maybe even start taking young larvae to feed any of their own larvae that might still be in their nest!

Every time I walk round my apiary I have my trusty tennis racquet with me and when a wasp alights on the woodwork of any hive I place the tennis racquet over it, so trapping it on the wood, and when it tries to fly off – Bingo! – another wasp zapped! I also renewed the water/jam contents of my jam-jar traps as they were filling with wasps and the jam had lost its colour. Within minutes of renewing them, there were wasps sniffing about the lid and by the evening some jars had up to a dozen wasps in them. Unchecked, these wasps really are a threat to our bee colonies. 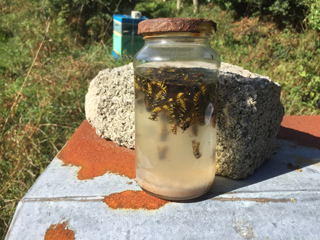 Whilst describing my efforts to control this wasp problem at our Roseland Beekeeping Group meeting last Thursday, a couple of members expressed concern/distaste at this approach to killing an otherwise useful garden insect. My argument for doing so is three-fold. Firstly, I will kill wasps that are predating on my bees. If they leave my bees alone, I will leave them alone. There will be thousands more wasps in the locality that I do not see and likely many more nests, so my killing spree has a minimal effect on the local ecological balance.

Secondly, I will only destroy nests that are “in the way” ie they pose a potential threat to us as we walk through the garden. Thirdly, it is coming to the end of the wasp season. Mated queen wasps will be going off to hibernate shortly, if they haven’t already started doing so, and the wasps that are left behind will die out over the next few weeks anyway – I am just bringing their “end-dates” forward a little! So I can sleep soundly at night with a clear conscience.

Until next month, keep a look-out for Asian Hornets and their nests. Let somebody know if you see either or suspect you may have seen something suspicious. And enjoy the fine (though cooler!) weather before the winter starts to set in in earnest.