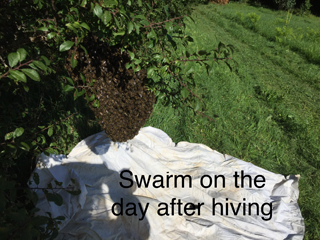 So the last super of honey has finally been extracted and the main beekeeping season is finally over – as you can tell from the weather over the past few days. The temperatures haven’t yet dropped that noticeably but there is a definite autumnal feel to the air. The ivy has been yielding nicely over the past month, so the bees have been having a busy time doing their final shopping trips before the real winter sets in. Even today, as I write this, it is raining and blowing quite a hoolie, but the bees are still working their socks off on the ivy flowers, piling in the nectar to be ripened into honey for the winter months.

I’m glad to say, though, the wasps have found better things to do than predate my hives, even though one of the wasp nests I have found is still very active. I have tried spraying it with foam insecticide – twice! – spraying it with a long lance dug deep into the Cornish hedge where they are nesting and spraying with soapy water, all to no avail. What I keep thinking of doing, but haven’t got round to yet, is turning my blowtorch on them in the hope that that will reach parts that no other deterrent can reach! So many things to do and so little time to do them!

I am currently trying to remove some bees from a flat roof and failing miserably! The bees were getting in and out through the gap between the fascia board and the wall, so I rigged up a tube with a one-way valve on the end, placed the non-valve end in their entrance and placed the valve end sitting at the entrance to an occupied nucleus hive on the adjacent conservatory roof and filled the fascia/wall gap either side of their entrance with foam strips. Needless to say, whilst they did start to use the tube and were exiting the one-way valve, the bees have moved their entrance along beyond the point where the foam blocks finished! 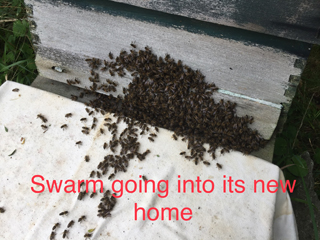 I therefore adjusted everything accordingly and thought that might be that. No way! The next thing was a call from my contact to say the conservatory extension from the flat roof was full of bees! I immediately went over to see what was going on and yes, there were hundreds of bees in the conservatory – but about half of them were dead! It turned out there was a permanent insecticide dispenser in the conservatory to kill flies – and of course it was killing the bees!

The smell (of the insecticide) was horrendous! I was choking on it whilst clearing up the mess and rescuing those bees that were still half alive – and my clothes stank of it for days afterwards! Horrible! I found where the bees were getting in though (through the overlapping Perspex corrugated roof), blocked it off and escaped whilst I was still alive! I need to go back again to see what the situation is now and decide whether or not I’m flogging a dead horse. Sometimes bees just don’t know when they are being helped! 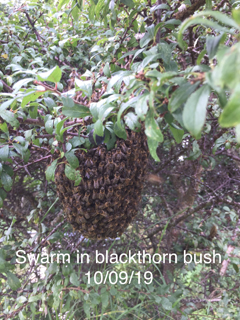 In between all this fun, Lin and I have been preparing to seed a wild-flower meadow. I rotovated about ¼ acre in the apiary and after a week of letting the turned soil settle we went back and started to rake off the clumps of grass that had been dislodged. Such hard work! It was really backbreaking, but we have cleared half and plan to sow the seed in the next week. Then we’ll rake the other half and, if we’re not too late, we’ll sow that as well. Otherwise, if the weather is against us, we’ll leave it until the Spring and sow then. That in itself would be an interesting comparison to see what difference an Autumn as opposed to a Spring sowing would make.

Having rotovated the ¼ acre for the wild-flower meadow, I returned to the field with my topper and compact tractor, to cut the grass in the other part of the apiary. This was on 10th September. I was driving along in front of the hives, trying to get as close as I could to the blackthorn bushes in front of them, when I turned my head to look ahead and nearly buried my face in a cluster of bees hanging on the next blackthorn bush! It was a close call but they and I avoided close contact!

I went back to my bee-shed to retrieve my equipment and bee-suit and duly shook the bees into the swarm box, inverted the box and placed it on a sheet on the ground under the blackthorn bush. It wasn’t a particularly large swarm, most likely a cast (that is, a secondary swarm – if so, where was the prime swarm?!). I had recently retrieved a jumbo brood box from the apiary when the hive was being predated upon by wasps and there was a large amount of honey in the combs, so I thought it would make sense to give the swarm a start (since I knew it was from one of my hives and not an interloper). I therefore set up the brood box in a hive on a site adjacent to the swarm (the swarm loses its memory of where it originally lived the minute it leaves the parent colony). 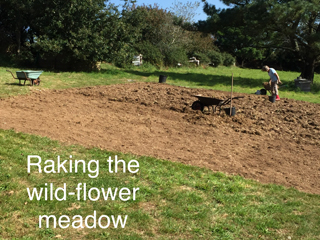 In the evening, I took the box containing the swarm to the hive and shook the bees onto a sloping board, covered with a white sheet, going up to the entrance of the new hive. The bees duly processed up the board and into the hive – and on the way I saw the queen! Quite skinny and small, so possibly a virgin queen, confirming perhaps my thoughts about the cast – time alone would tell. Anyway, job done! The following morning I went to check everything was alright with them and to check they had settled in and what did I find? The occasional bee flying in and out of the hive, which, when I removed the crown board, proved to be empty! “Oh no! I’ve lost my swarm!”. The trouble is, virgin queens are quite fickle and can be very choosy about their accommodation. Obviously this was the case here.

I walked around the apiary, somewhat disconsolate (losing a swarm is quite an emotional event for a beekeeper!). Then what did I see but the swarm clustered in virtually the same spot as it had been the day before. When a swarm clusters on a branch, it imparts a smell to the branch and its leaves which remains attractive to bees for some time and these bees had obviously “scented” the swarm smell and chosen to pitch in the same spot, though why they had not stayed in the hive I do not know. It’s not the first time I’ve experienced this and it’s quite commonly reported amongst beekeepers. 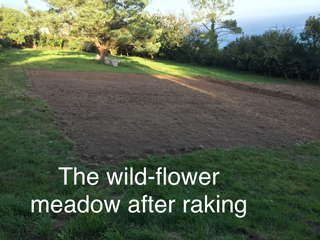 Nonetheless, one wonders what was wrong with the accommodation provided which was complete with food reserves to see the bees well into the winter. My only thought was that the brood box was too big, so I replaced it with a nucleus box with some comb remains and starter strips in, and after catching the swarm and repeating the exercise of yesterday, in the evening took the bees to the ramp and threw them down onto it. They again scrambled up (bees instinctively move upwards) and surrounded the box, some going in but not many.

I left them to it! Two hours later, just before dusk, I returned to check the situation and found the box still covered with bees and only one or two inside, so I took an ice cream container, scooped up the bees on the sides and front of the box and deposited them through the top of the nuc box onto the frames inside – where they stayed, thank Goodness! Once it was dark, I went back with a torch and placed a small piece of queen excluder over the entrance so that the swarm would not be able to leave with the queen, should that even cross their mind! I couldn’t do any more so left them to it.

The following morning, the swarm was orientating to the hive position as per normal – and the swarm had stayed in! Success! I just had to remember to remove the queen excluder the following day, having given the bees long enough to ensure they wanted to stay and not so long that it prevented the virgin from coming out to orientate and to mate. Since, then, I have fed them regularly and they are going great guns. I just hope the queen gets a chance to mate in some fine weather and that there will be enough drones around to keep her happy! 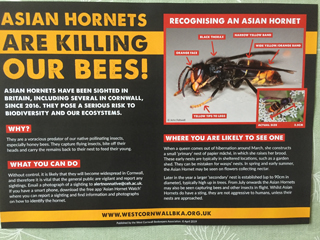 Finally, the Asian Hornet (yes, I know I go on about it but it is so important that we are ready for its arrival and take rapid action to suppress it if found, so I am not apologising!). An Asian Hornet sighting has been confirmed south west of Ashford in Kent in early September. This follows an earlier confirmed sighting and subsequent nest destruction in the Tamworth area of Staffordshire.

With the sighting in New Milton, Hampshire earlier in the year it is obvious that members of the public are key in spotting this insect (all sightings so far have been from members of the public). I would therefore ask that you continue to keep a look out for this invader species and report, as ever, to alertnonnative@ceh.ac.uk

As a reminder, the Asian Hornet has a dark brown or black, velvety body, has a yellow or orange band on the fourth abdominal segment, has yellow tipped legs and is smaller than our native European Hornet. Please help us to stop this exotic pest in its tracks. Thank you.