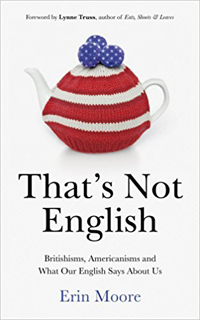 That’s Not English by Erin Moore – Published by Vintage, 2015

A book by a London based author from America, about ‘Britishisms’, Americanisms and “What our English says about us”, it’s rather less lightweight than I anticipated from the cover.

It’s not just a comparison of American-English and British-English though; it covers such alleged UK class based crimes as using the word settee instead of sofa. Of course, in the US, where once only God was described as awesome, we read that now even burritos attract that descriptor.

But is it really the case that, in the US editions of the Harry Potter books, they wear sweaters not jumpers and eat cookies instead of biscuits? Are our languages so different we need translations?

Are our cultures so dissimilar because, on one side of the Atlantic, peanut butter from a container the size of a bucket is considered an acceptable breakfast food, whereas on the other, Marmite from a jar as small as an Oreo cookie, is large enough to be eaten with a year’s worth of toast?

On other matters I wasn’t so sure about the accuracy of the author’s statements. Just how long ago were British girls and/or young women forced to wear pinafores? And is it really so difficult to find a British person willing, not necessarily to eat it, but simply to  use the word ‘brunch’? And last time I checked Cyprus was in Europe. And who has ever heard of Prince Charles being called Chazza?

On one thing we are agreed though, the British do seem to use the word ‘Sorry’ far more than any other race (but 1.9million times in their lifetime.  Really?)

You have a nice day now!