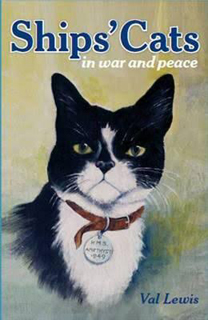 Ships’ Cat’s in war and peace by Val Lewis – Published by Nauticalia, reprinted 2014

I make no apology for saying that, although the author delves into the history of exploration and the seafaring past (right back to the time of Noah), this is primarily a book for people who like cats. But it isn’t just a history of feline derring-do; it is scattered with astute observations e.g. that in a Victorian drawing, the animals are shown going in ‘two by two’ but the cat…? He walks alone.

It was their rodent catching skills which encouraged the ancient Egyptians to recruit cats to their ships’ crews. Later they were believed to be able to forecast the weather. But, of all their skills, the one which has been most appreciated is their willing companionship, most notably described in the stories of Simon, who was later awarded a medal for bravery and, my favourite, Mrs Chippy, who travelled with Shackleton’s expedition to the Antarctic.

So from the time of Egyptian cats, some several thousand years BC, right up to Edward Lear’s tale of the pea green boat and beyond, there are stories of cats who made the decision to be domesticated (at a time and place of their choosing). In most cases their general dislike of water was far outweighed by their desire to explore, and their love for and loyalty to their human companion(s) often led them to show extraordinary bravery.

Declaration of interest: I admit to being biased. Not only is the author ‘a member of the Apostrophe Protection Society’ a cause I  support wholeheartedly, but I also had my very own Ships’ Cat, complete with lifejacket: DC R.I.P.