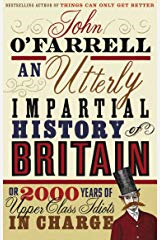 An Utterly Impartial History of Britain: or 2000 Years Of Upper Class Idiots In Charge by John O’Farrell – Published by Black Swan/Random House

Sometimes when you’re browsing the shelves of a local store, in search of a new variety of fudge or a really exciting flavour of ice cream, you come across something quite unexpected. A truly ridiculous book.

How to describe it? A cross between Yeatman and Sellar’s wonderful ‘1066 And All That’ and the entire series of ‘Horrible  Histories’? Not quite.

As someone who cannot claim to be a historian, I can confidently say this book is the result of detailed research coupled with only a few tiny departures from the truth. For example, whilst I do not doubt for a moment that the Domesday Book  is one of the greatest surveys ever undertaken of population and possessions, I’m not entirely convinced the surveyors of the time wore plastic ID cards, although it’s reasonable to assume they carried clipboards (how else would they have kept track of the standard questions when iPads were still in their infancy?).

As to dates, the author has a tremendous grasp of that sort of detail. Indeed, he is able to report on key events with the sort of accuracy only the phrase “around a decade later” can pinpoint.

To give you an idea of the depth of the author’s research, here his explanation of two of the most significant events in our (relatively) recent history:

The effect on the Monarchy of the death of Prince Albert

So, from Julius Caesar to (almost) the present day, Mr O’Farrell sets out, in glorious black and white, the triumphs, the failures and the “incomprehensible rollercoaster of events that make up the story of Great Britain”. He does not, of course, attempt to cover the current political situation, possibly because it is, as the blurb on the back of this book states “as entertaining as a witch burning and a lot more laughs”.

In summary, if you aren’t offended by irony or jokes about politics and politicians, royalty, religion, science…Well, pretty well everything really, this is the book for you. Amaze your dinner party guests, serve up a surfeit of lampreys (to the ones you don’t like) and impress them all by knowing that Waterloo isn’t just the name of an Abba song.