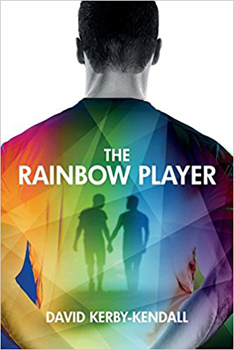 The Rainbow Player by David Kerby-Kendall – Published by Whiteley Publishing, 2014

Sammy Hatchington is an England footballer, the Rainbow Player of the title.

He’s the only child of an uncaring father and a mother too browbeaten to defend or support her son. But life isn’t all bleak. He has the love and support of Thomas, book seller and surrogate father, his wonderful grandparents and his friend Davey.

Sammy also has a real talent for football.

So far, so predictable you might think, but this isn’t just another book about a schoolboy from a deprived area who becomes a football hero against all the odds. It’s a moving story outlining Sammy’s growing, but late awareness of his sexuality. It’s also a story of friendship and loyalty.

Being a celebrity isn’t all money and fun, it’s also about living life in the public eye and knowing everyone will judge everything you do and say. It’s about learning who your real friends are and realising that some people will always label you. And they want others to do the same.

David writes fluently and with real feeling, having a particular talent for dialogue, making you care about the good guys and hope the baddies get what they deserve. I really liked the characters of Thomas and Gran, but it was Grandad who really caught my attention. Living in the shadow of his outspoken and spirited wife, he had a quiet inner strength that made you realise how strong his love was for his grandson. It takes a talented writer to draw even the minor players with as much care as the major ones.

Although this is a work of fiction, there are strong hints at recent media stories about sportsmen, which sadly demonstrate that, even in the 21st century, in the headline stakes, there are some for whom salacious stories of people’s lives trump relevance and the right to privacy.

Vanilla ice cream with raspberry sauce will forever remind me of this book. Sometimes it’s all you need … although sometimes there are more important things in life.

Next month’s I’ll be interviewing the author for Roseland Online’s Writers Talking feature.