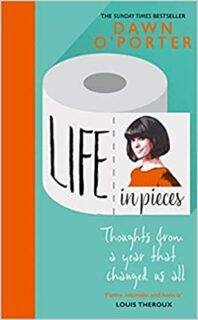 Life in Pieces by Dawn O’Porter
Published by HarperCollins, 2020

Firstly, apologies for starting 2021 by reminding you of our year of living with the pandemic.
Like most people, Dawn O’Porter has been been trying to keep calm and carry on, despite lockdown, the death of a close friend and an excess of cheese and crisps.
Written in the form of a diary, it’s a record of daily life in LA: food, cooking, drugs, fashion, alcohol, parenting (everything from dealing with toddler tantrums and toilet training to sporadic attempts at home schooling), more alcohol, being married to a famous actor and (did I mention it?) alcohol.
Actually, not much happens, although I found the first half surprisingly engaging and, far from being a depressing reminder of a difficult and worrying time, it was strangely reassuring to know that, for most of us, life in 2020 has been a mix of the mundane and occasional triumphs and/or short periods of interest.
But this is a book of two halves and, unfortunately, the references to tequila (poured at any time from 4pm) and marijuana edibles (taken at any time from 5pm) became so frequent I began to fantasise about Judge Judy giving the author a “good talking to” about the need to clean up her act. The tone also changed and became much darker. Maybe that was the result of prolonged isolation, something which has had an effect on most people’s moods.
Overall a bit disappointing after an interesting start.