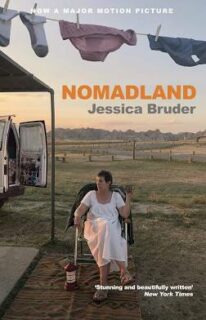 Published in the UK by Swift Press, 2021
You’ve seen the film, now read the book (first published in the US in 2017). Based on the author’s 2014 Harper’s Magazine article “The End of Retirement: When You Can’t Afford to Stop Working” and supplemented by further research.
It’s a multi layered story or what’s described as “a revelatory tale of the dark underbelly of the American economy”. Focussing on Linda and several other people who describe themselves as “houseless” (not to be confused with homeless), mostly older people who live in RVs, converted vans and even cars, moving from place to place in search of seasonal jobs.
I was intrigued by both the story and the positivity of the people involved. In many ways they represent American society as a whole – a mix of highly educated, high achievers, middle income, white collar workers and manual workers. They don’t dwell on the loss of their homes, savings and pensions, instead they celebrate being debt free for the first time in their lives. They don’t demonstrate against working conditions – long hours and low pay – they are grateful that, aged 70, even 80, they are considered more reliable and more committed than younger applicants.
Although the lifestyle, the hard work and the uncertainty would not be the choice of many, the people interviewed for the book shine with positivity. Rather than regretting the loss of past dreams, the difficulty of managing on state benefits and the lack of universal health care, they choose to focus on the friendships they make and the opportunities that are out there.
It made me angry, sad, disappointed and grateful. A must read.
Note: I haven’t seen the film so I don’t know how closely it echoes the book.