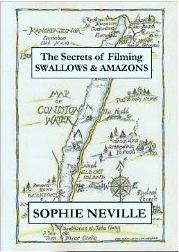 Having recently returned from a trip to the Lake District, visiting many of Arthur Ransome’s old haunts and tracking down locations used in the 1974 film of his book Swallows and Amazons, I have declared June to be “Sophie Neville month”. I am reviewing two of her books as well as interviewing her.

Firstly, for those of you who remember the film, and love it as much as I do, especially Sophie’s exquisite performance as Able Seaman Titty Walker, this must-have book does what it says in the title. What it doesn’t do is fall into the trap of many actors’ memoires, name dropping for the sake of it with the author taking centre stage, and, despite the review by one of the major broadsheets, there really isn’t any serious “debauchery revealed behind the scenes of Swallows and Amazons”. It’s a film starring children and made for children, which stuck closely to the original story. The result is a joyous and heart-warming celebration of innocence and imagination. And so is this book.

To sum up: as Sophie says at the end,

“My only hope is that I have … honoured Arthur Ransome’s dreams. I hope that he would have been pleased with our efforts.”  I’m sure he’d have loved the film and been delighted by the book, which is based on the children’s own diaries and photographs taken by the Neville family. I read it on kindle (which has the bonus of video clips as well as photos) and I’ll be buying the print version to sit alongside my almost complete (rather worn) set of Arthur Ransome’s books. Just lovely.