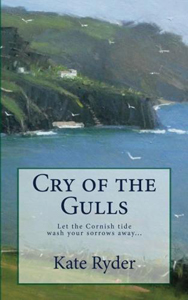 Cry of the Gulls by Kate Ryder – Published by Create Space

Romantic fiction, written by a Cornwall based author, this is a many layered book with vivid descriptions of landscapes, intertwining characters and stories, complex feelings and a twist at the end.

Set mainly in Cornwall, with a range of characters from artists to actors, I have to admit this would not normally be my kind of book but wonderful prose like “the sea, the same colour as the sky, has no clearly defined horizon, merely a subtle merging of varying shades of grey” drew me in from the start.

Although not the central character, Deanna stood out for me as the most well-defined in terms of her feelings and behaviour. I was rooting for her throughout. That said, people’s reactions to meeting the famous Oliver Foxley and their handling of Cara’s bereavement were also very realistic, as was Oliver’s descent into depression. Both moving and sad.

Relationships, art, sea, feelings – this story has them all.

As an added bonus the wonderful picture on the cover was painted by Robin Mason and there’s input too from Rachael Mia Allen. You can see their work at The Harbour Gallery in Portscatho.