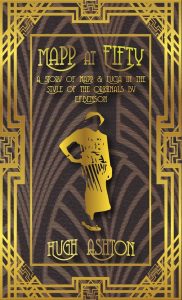 Described as “a story of Mapp & Lucia in the style of the Originals by EF Benson” with characters and incidents which are “either the product of the author’s imagination or are written in respectful tribute to the creator of the original characters”.

So far so good but…. I love the EF Benson originals and was highly impressed by Tom Holt’s books set in Tilling and featuring the ‘dear ones’*.

When Hugh Ashton announced on the Mapp & Lucia Facebook group his plan to write this book, adding extracts and seeking comments, I deliberately didn’t comment because I knew I’d eventually read the book (and probably dislike it as I’m usually not a fan of authors messing with characters and stories that I love).

Well, I’ve now read the published book and I can report that I really enjoyed it. It’s delightful, being both sharp and good humoured and demonstrating an accurate knowledge of the setting, the period and the characters. Add to that a believable plot (well, as believable as the originals anyway!), sympathetic treatment and excellent dialogue and my only criticism is that I’d like it to have been longer. Might we be encouraged to hope* there will be a sequel? I’ve already read this one twice!

Finally, as true Tillingites would say, “Any news?” I respectfully suggest you read this month’s Writers Talking where I interview the author. Until then, “Au reservoir*”.

*Apologies to those of you who are unfamiliar with the Lingua Franca of Tilling.