The Secrets of Latimer House by Jules Wake
Published by Harper Collins, 2021

Latimer House is a real place used by the British government during WWII to carry out top secret activities. Captured German U-boat crews and pilots were interrogated there before being transferred to more traditional POW camps

The Secret of Latimer House is a work of fiction based on a real section of those war operations.

Evelyn (upper class, rich, well educated and keen to show women are as capable as men), Judith (a serious young Jewish woman who escaped from Germany) and Betty (a sparky, local girl with a violent boyfriend) come together at Latimer House and soon become friends. So far so predictable.

A pleasant enough read, but I found the characters rather clichéd and the plot too sentimental, despite occasional more gritty passages. It worked best when it referenced the real horrors of war and less well when there were too many coincidences and too many attempts to draw opportunity out of adversity and tie it up neatly within the story. 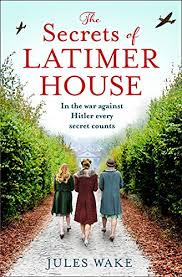