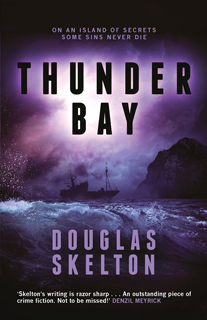 This author was recommended to me by a friend who probably reads almost as many books as I do, but for different reasons. He’s a multitalented* voiceover artist whose work includes audiobooks.
If I had to choose one word to describe this book it would be “suffocating”. And I mean that in a good way!
A funeral brings back to the Scottish island of Stoirm the man accused of the murder of a local woman. Many believe the ‘Not proven’ verdict was wrong. But was it?
The crime itself took place fifteen years before journalist Rebecca decides to visit the island to see if there’s a story to be told. She also wants to find the truth about why her father left decades before and never spoke of it again.
This is a dark story with unpredictable twists and several side issues, many of which might have been made into separate stories in a less generous writer’s hands.
All that added up to a good read, but it was the author’s talent at depicting the gloomy and repressive atmosphere, and the secretive nature of the families living there, that really got to me. By the end I felt that, if I’d been visiting, I’d have been desperate to leave.
Quality writing which made it easy to imagine it as a film. So atmospheric was it that as I read it I even had actors in mind to play some of the key roles.
I look forward to reading more of Douglas’s books.
(* my description, not his!)